Pico 4: All you need to know about the Quest 2 rival from Bytedance

The Pico 4 is the first VR headset to challenge market leader Meta Quest 2. Here is what you need to know.

The VR market has been in firm hands for two years. Meta Quest 2 offers beginner-friendly virtual reality at an unbeatable price and quickly built up a quasi-monopoly.

The Pico 4 is the first VR headset that challenges this position. It works standalone, offers well-known VR games, and costs less than a Meta Quest 2 – despite partly better hardware equipment.

TikTok parent and Meta competitor ByteDance acquired Pico in the summer of 2021: The owner of the fastest-growing social network is now attacking Meta in the virtual reality space by investing in the technology and pricing its products as aggressively as Meta’s.

While Pico sold its VR products mainly to enterprises and Chinese consumers before the acquisition, the company is pushing into the West under the aegis of ByteDance. The Pico Neo 3 Link was the first market test.

After many rumors, Pico officially unveiled the Pico 4 on September 22. This is the first time Western consumers have a choice between two affordable standalone headsets: Meta Quest 2 and Pico 4. Although the Pico 4 uses new VR technologies in some areas, it is not in direct competition with Meta’s upcoming Quest Pro VR headset. The Pico 4 Pro, which will follow later, is better suited for that. You can read more about that below.

You can also read our preview of Pico 4. We were able to test the VR headset at Gamescom 2022.

What does Pico 4 offer, and how does it differ from Meta’s current VR headset Quest 2?

What performance does the Pico 4 offer?

In terms of performance, both devices are equipped with a Snapdragon XR2, which is the current standard chip for standalone VR headsets. However, the Pico 4 has 8 GB of working memory instead of the 6 GB of the Quest 2. That should not make a big difference.

What resolution does Pico 4 have?

The two 2.56-inch LC displays have a slightly higher resolution of 2,160 by 2,160 pixels than the Meta Quest 2’s single screen (1,920 by 1,832 pixels). The supported refresh rates are 72 and 90 hertz. The headset is certified for low blue light and thus offers an eye-friendly gaming experience. 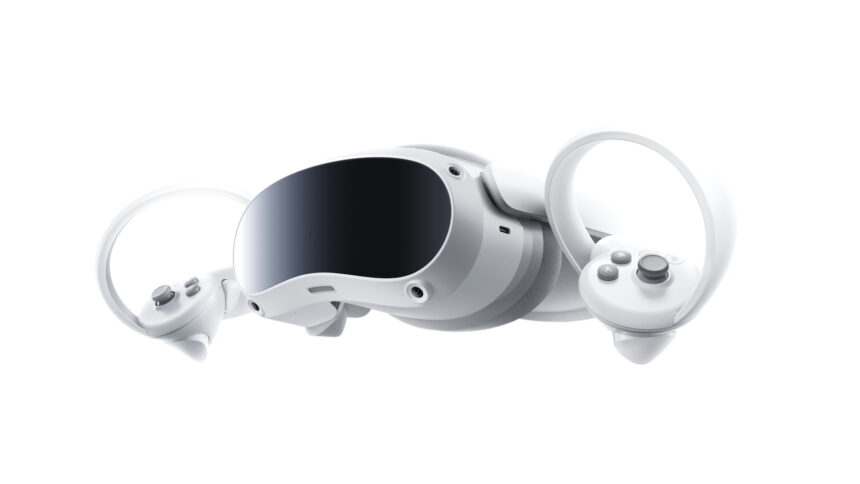 Which lenses does Pico 4 use?

The main difference between Quest 2 and Pico 4 is that Pico 4 uses pancake lenses. These allow for a much slimmer form factor and lighter weight than Meta Quest 2, which uses classic Fresnel lenses. Quest Pro will also use pancake lenses.

The field of view is 105 degrees, according to Pico. Because of the proximity of the pancake lenses to the user’s eyes, the field of view appears larger than the degree figure indicates, our first hands-on indicates.

Is it possible to adjust the lens distance on the Pico 4?

Unlike the Quest 2, which only offers three levels, you can continuously adjust the lens distance on the Pico 4. The headset supports an IPD range of 62 to 72 millimeters. If you wear glasses, you can use the included headset spacer to better protect the lenses. However, normal eyeglass frames fit underneath without any problems.

What’s the weight of Pico 4?

Thanks to the pancake optics and the battery on the back, the Pico 4’s casing weighs only 295 grams.

With the head mount, it weighs a total of 586 grams, according to the manufacturer. The head mount is sturdier and higher quality than the simple fabric strap of the Meta Quest 2 and offers an adjustable strap with non-slip synthetic leather.

The Quest Pro, on the other hand, will also have a stable head mount according to first leaks, but it seems to shift the weight of the VR headset more to the upper half of the forehead. 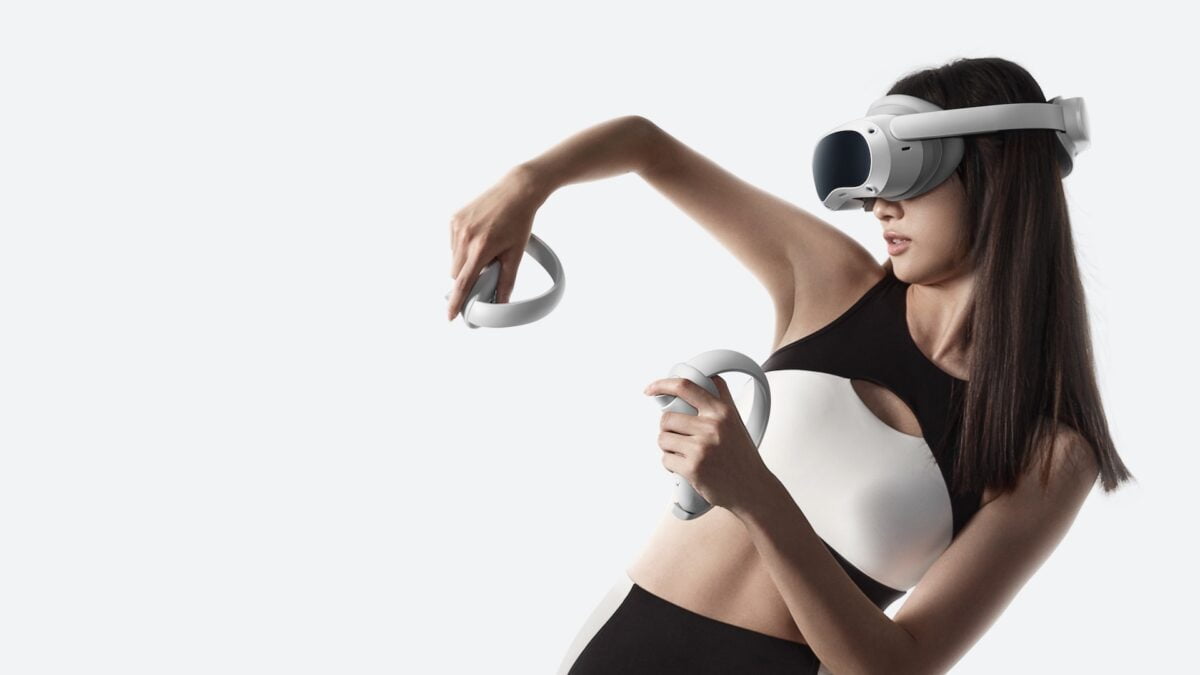 Little has changed in the head mount of Pico’s predecessors. Additional comfort is achieved by the lower weight, but not by the head mount, which does not adapt to the back of the head and never fits tightly. If you tighten the head mount a lot, it sits better, but that comes at the expense of comfort. Read more about it in our Pico 4 hands-on.

How long does the Pico 4’s battery last?

The battery offers a capacity of 5,300 mAh and is supposed to run for up to three hours at a stretch. Quest 2 runs for about two to three hours. The battery supports Qualcomm’s Quick Charge 3.0 and can thus be recharged quickly.

Does Pico 4 have integrated speakers?

The speakers are integrated into the head mount and provide 3D surround sound. Two integrated microphones support noise reduction (up to 30 dB) and echo cancellation (up to 50 dB).

Does Pico offer a passthrough mode?

Like Meta Quest 2, Pico 4 has four cameras for room tracking. A 16-megapixel RGB camera is integrated into the front and enables a sharper RGB passthrough mode. Meta Quest 2 only offers poor quality black and white passthrough. However, the Quest Pro will offer a color camera and color passthrough.

What features do the Pico 4 controllers offer?

In addition to the VR headset, the VR controllers have also been completely redesigned and are more elegant than those of the Pico Neo 3 Link. The tracking rings now run diagonally to the wrist instead of protruding from the grip, allowing you to bring the controllers closer together without the tracking rings getting in the way. 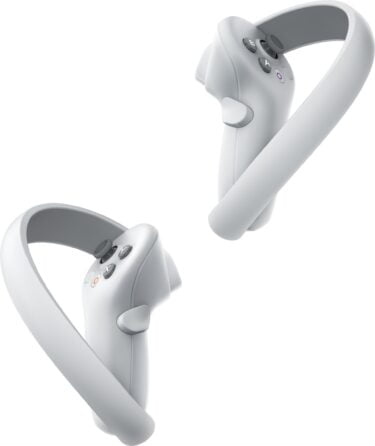 The new VR controllers of the Pico 4. | Image: Pico

Pico also promises a more realistic haptic experience thanks to a new HyperSense motor. The controllers are powered by two replaceable AA batteries. The input options are almost the same as with Meta’s touch controllers: Each controller has an analog stick, two main buttons, a trigger button, and a grab button. The Pico controllers each have two system buttons, one of which is for screenshots.

What OS does Pico 4 use?

The headset runs on Android, like Quest 2, and uses a VR-optimized operating system called Pico OS.

What VR apps are available for Pico 4?

There are VR apps in the Pico Store that cover gaming, fitness, video, and social.

Confirmed VR games so far include Peaky Blinders: The King’s Ransom, Ultimechs, and The Walking Dead: Saints & Sinners 2. Exclusive high-profile games like Meta’s Resident Evil 4 are missing so far. An exclusive cooperation with Ubisoft could start in 2023: Just Dance will then be released in the Pico Store. 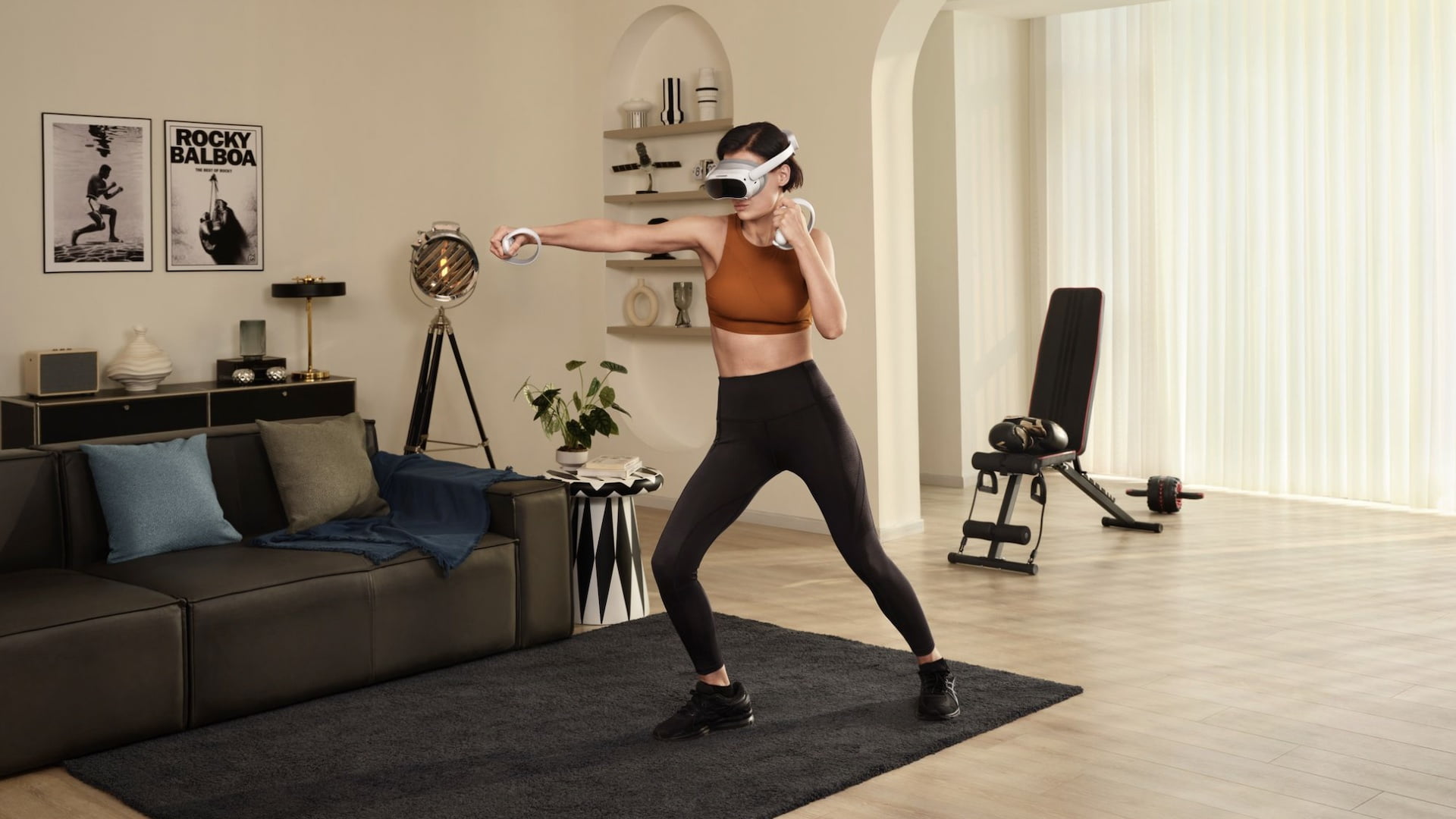 Pico also promises “groundbreaking live music experiences” together with Wave and announces Pico Worlds, which is supposed to be a kind of proto-Metaverse. However, the selection of VR apps in the Pico Store cannot currently keep up with the Quest Store.

Does Pico 4 support PC VR via cable and wireless streaming?

The Pico 4 does not have a display port cable connection for native PCVR streaming. A USB-C cable for a video streaming signal is also not available. As a reason, Pico points to the Pico Neo 3 Link, which is intended for gamers who want to play SteamVR games, for example. The Pico 4 is exclusively intended for native, mobile apps.

In 2023, there is supposed to be a Wi-Fi dongle for direct transmission between PC and Pico 4. Pico did not manage wireless streaming very well in the past, so the move to a dongle is obvious. A Wi-Fi dongle is also planned for the Quest headsets soon.

When will Pico 4 be launched, and how much will the VR headset cost?

The market there is firmly in Meta’s hands. Bytedance also faces the threat of legal action in the USA. It is possible that Pico will test the launch of Pico 4 in Europe first and only then expand to the US. Especially in Germany, Pico currently still has an advantage since the Meta Quest 2 is not officially sold there.

Are there any accessories for Pico 4?

Pico plans the following accessories for 2023:

What about a Pico 4 Pro?

The Pico 4 Pro is expected to offer additional eye and face tracking and compete with the Quest Pro. It will be announced later this year, but will only be sold to enterprises and developers. Feedback back on the device will be used to improve the VR headset and possibly sell it to home users in 2023.

It’s possible that Pico will wait for the Quest Pro to be unveiled on October 11, 2022, and realign pricing and marketing after that.