Mech athletes, rocket fists and spectacular goals: At Gamescom 2022, we played the new sports game from the makers of Demeo.

While conventional games often copy each other and hardly reinvent themselves, there are always pleasingly creative experiments among virtual reality titles. The new VR game from Resolution Games (Blaston, Demeo) skillfully combines mech action with ball sports into a compelling mix.

Ultimechs doesn’t get by without role models either: At first glance, the sleek arena in the metal cage is strongly reminiscent of the popular car soccer game Rocket League. Here, too, the goal is to score as many goals as possible in short matches, either in a direct duel or in two teams of two.

We played the VR sports game at Gamescom 2022 and then again on Steam – and are thrilled.

One important difference to Rocket League is immediately apparent: Instead of pushing the ball with cars, you propel it through the arena with powerful mech strikes. You steer your fists like a remote-controlled airplane via the VR controllers. This way you hit the ball from different angles.

The distance to the ball is crucial, because the rocket fists don’t fly infinitely far. This is where the lightning-fast locomotion comes into play.

“We originally experimented with free, fluid movement for Ultimechs as well,” Resolution Games CEO Tommy Palm tells us at Gamescom 2022. In the end, however, the team decided against this and instead relied on fixed places in the arena to which you can steer your mech.

Similar to a board game (or the VR shooter Rogue Ascent, for example), players switch between 24 predefined fields in real time: Simply point the controller at an adjacent square and, at the press of a button, the mech will jump exactly to this spot.

“One advantage of this checkerboard-like division is, for example, the possibility to strategically block an opponent,” says Palm. In addition, the teleportation principle prevents motion sickness. That doesn’t slow down the action, by the way: The mechs jump back and forth between the opponent’s and their own goal in a matter of seconds.

You can also play Ultimechs sitting down – but you should use a swivel chair. Turning with the analog stick is much slower than physically adjusting the viewing direction. The position of the ball is indicated by a marker, similar to Rocket League, when it is not in the field of view.

In addition, there are special abilities of the three mech classes, which recharge with items that occasionally appear in the arena. We haven’t really warmed up to the sniper shot yet: You can use it to shoot the ball into the goal from a greater distance or to briefly put opponents out of action. We liked the freely placeable barrier to better protect a flank. The fist explosion hurls the ball or two opponents through the arena at the same time, which proves to be very useful.

In the Gamescom demo, which is also available on Steam until 28.08., there are only two modes, a workout, leaderboards, various party functions and a few cosmetic extras.

The latter can be unlocked with experience points via the two-tier Season Pass. The paid version includes exclusive cosmetic bonuses. It remains to be seen whether the Free2Play concept can generate enough sales in the still comparatively small VR market. 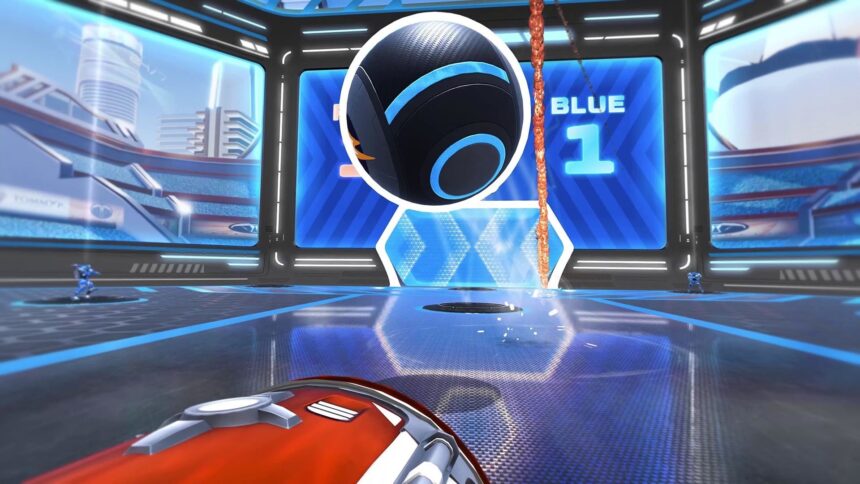 The fact that you can look around quickly in VR makes for an entirely new gameplay experience compared to flat games like Rocket League, where you turn the camera with the analog stick instead of using head movements. | Image: Resolution Games

Resolution Games, however, is known for constantly adding new content and features to VR games like Demeo. The rousing duel shooter Blaston, for example, is a very different game today than it was at its rather minimalist start. Ultimechs thus has great potential to become a long-running hit with eSports ambitions.

The fast, well-designed and really fun gameplay has already convinced us. Ultimechs will be released on September 15 for Meta Quest 2, Pico headsets like Pico Neo 3 Link and SteamVR.