With the VR headset Pico Neo 3 Link, Bytedance wants to compete with Meta in the B2C market. How well does it work?


In 2021, Pico Interactive released the Pico Neo 3 Pro VR headset. This is a standalone VR headset similar to the Quest 2 (review), but the target audience is limited to enterprises. Then Chinese social media company Bytedance, best known for being behind TikTok, bought Pico. They are already giving Meta tough competition with TikTok – now they also want to attack in the race for the Metaverse and immersive technologies.

At release, Pico Neo 3 Pro was an excellent VR headset for B2B use. It features quick setup, intuitive access to files and apps, no required login (except for the Pico App Store), great picture, and finally good VR controllers. However, the Neo 3 Pro was not recommendable for private use: Various bugs, problems when connecting a PC as a player, and an almost empty game store made the device uninteresting for home users.

This is supposed to change with the Pico Neo 3 Link. The VR headset is intended for consumers – but is, in fact, not much more than a Neo Pro 3 with a new sticker. Is the VR headset still worth it?

Yes – the Neo 3 Link is a viable alternative to the Quest 2 – albeit with setbacks. Setup is easy thanks to the new mobile app. Image and sweet spot quality are excellent. VR controllers work well – even if they are not as handy as Meta’s touch controllers. But, in terms of comfort, Neo Link 3 cannot keep up with the Quest 2’s Elite strap.

If the connection of the DisplayPort cable works (which is not always the case), you can enjoy a sharp, lossless image from your SteamVR apps. Wireless streaming, on the other hand, does not convince me as it only runs smoothly in low quality. The VR app selection in the new Pico Store is okay, but low compared to the Quest Store. Downloading and playing worked smoothly in my tests.

I can recommend the headset, especially for the link connection via DisplayPort for SteamVR streaming. Beyond that, it is still not really mature in many places.

Pico Neo 3 Link is suitable for you if …

At this point, I would go into resolution, field of view, and all sorts of technical things you need to know about the Neo 3 Link. But since the Neo 3 Link specs are identical to the Neo 3 Pro, read my updated review of the Pico Neo 3 Pro if you want those in-depth stats. 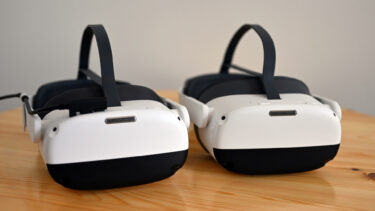 The Pico Neo 3 Link (left, with DisplayPort cable) next to the Pico Neo 3 Pro (right). The only difference is the face pad. 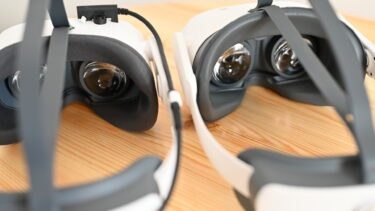 I will talk now about some interesting facts for users at home, as well as minor differences to the Pro.

The Pico Neo 3 Link comes with an improved face pad. It is no longer made of stiff rubber, but of (foam) fabric, and thus fits my face better. As a result, it closes better and less light passes through. Incidentally, this is also the only clear distinguishing feature between Link and Pro – otherwise, they look and weigh the same at 682 grams. 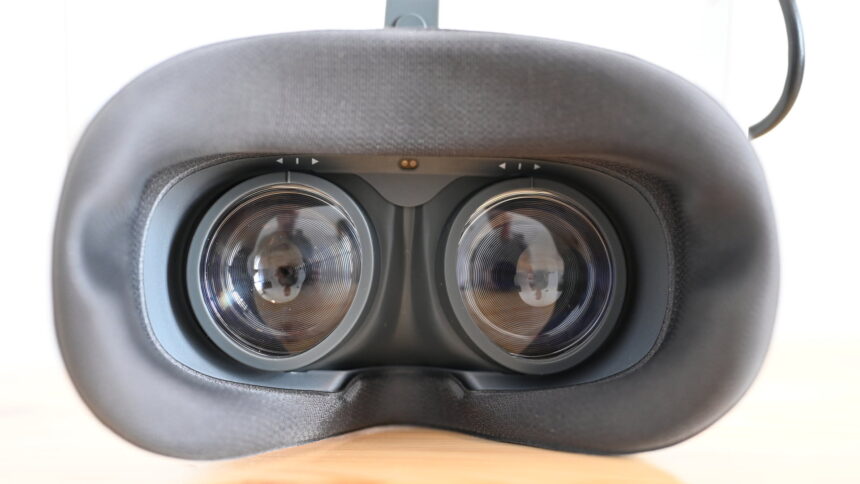 The face pad is new, the rest is also exactly like the Pico Neo 3 Pro. | Image: MIXED, Benjamin Danneberg

Comfort has improved only slightly with the new face pad. It needs quite high contact pressure in the face to properly fit. But even then, the headset always slips back and forth a bit during fast lateral (head) movements.

The setup has changed: There is now a mobile app that allows me to enter payment data or the Wi-Fi password. Access to the Pico Store is not yet available in the app. Everything else is almost the same as the Quest 2 setup and works flawlessly. However, unlike the Pro, I now have to sign up with a Pico account right from the beginning.

The Pico Link software has become a bit more professional with better user guidance. However, it can happen that the software does not recognize SteamVR. Then, various fresh installations and possibly updates of the Link software and SteamVR are necessary. If the connection works, the DisplayPort usage works very well.

The loading time until SteamVR is displayed in the headset is quite long, but I can enjoy a lossless and crisp image of my SteamVR games from this point on. There are no latencies, and the VR controllers also worked perfectly in my test, for example with Half-Life: Alyx. However, the controls for turning off the link connection are annoying and rather frequently don’t work. A restart of the headset is necessary, then. 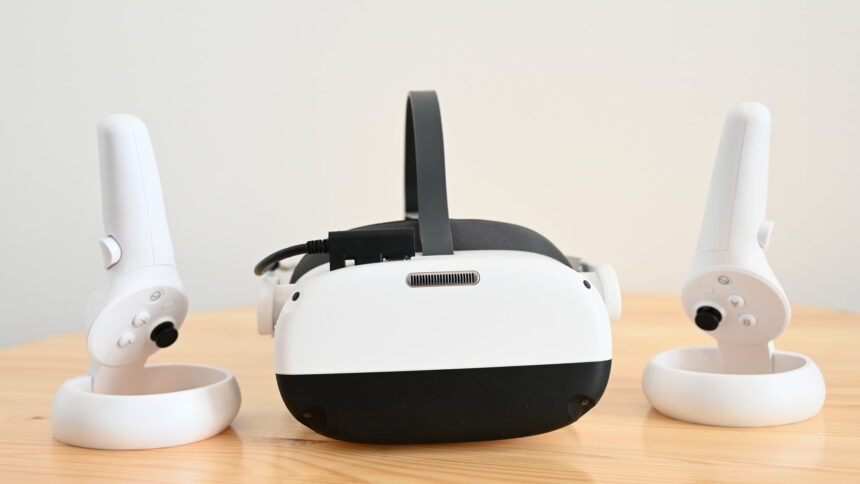 The display port cable of the Pico Neo 3 Link (seen on top of the headset) works perfectly – if the software cooperates. | Image: MIXED, Benjamin Danneberg

By the way, I still can’t recommend the wireless solution – it runs only smoothly enough on lowest quality level. Pico/Bytedance still has to invest some work here.

The disadvantage of the DisplayPort solution is – as with all VR headsets that have this connection type – the connector puzzle on the PC. Those who have a multi-monitor setup might have to swap the connector. The USB cable can also cause trouble during connection: It’s intended for USB 2.0, but my PC didn’t recognize the connection on some USB ports.

A bit silly: The DP cable attaches to the headset with a screw. There is even a screwdriver included in the package for this…

Overall, the system is satisfyingly stable for a so-called beta. I did not experience any crashes while using apps. However, problems occurred occasionally directly at startup or when closing apps, such as black screens or unclickable buttons. A restart of the respective app sometimes worked, sometimes I had to restart the Neo 3 Link completely.

According to Pico, the store offering includes over 100 different VR games and apps. The store worked well in my random tests. Games like Superhot, Walkabout Mini Golf, Smash Drums, or Eleven Table Tennis also run well except for the occasional bugs mentioned above.

It remains to be seen how quickly Bytedance can add more content because currently, the offer does not come close to the Quest Store. Meta games like Beat Saber or Resident Evil 4 are not available.

As with the Pico Neo 3 Pro, Pico/Bytedance has done a lot right – or, as evil tongues say, copied a lot quite well. The similarities in the look of the VR headset and the setup process to the Quest 2 are striking.

If you can live with various minor bugs and prefer a direct image transfer from the PC that is not affected by compression, you will find an excellent VR headset for SteamVR games here. The native store already offers some VR apps, but the selection is still limited. It remains to be seen whether and how quickly Pico/Bytedance can deliver more content.

However, it also has to be said clearly: Those who were hoping for Pico for data protection reasons will find themselves disappointed by the takeover of Bytedance. It is highly unlikely that Bytedance does not collect any data in the virtual reality sector, and entrusting one’s own data to a company that has to grant the Chinese government direct access is also a delicate decision. This is why some companies are currently withdrawing from Pico.

In the end, Pico Neo 3 Link is a good VR headset that still needs some time or a successor headset to become great. The effort and the money Meta put into the Quest 2 cannot be easily replicated in a shorter time and with fewer resources.

User experience, stability, and security (the Pico website for user accounts doesn’t even use the HTTPS protocol) still have room for improvement. Hand tracking, object recognition or Bluetooth connections, for example, to keyboards, are missing. I also cannot browse the store on the web. It is possible that things will get added during the Link beta program.