The Pico Neo 3 Pro is primarily a VR headset for businesses. How good is the B2B headset? Is it also suitable for private purposes?

The VR market is currently dominated by the Meta Quest 2 – at least the consumer market is. In the business area, however, the device is not well received: On one hand, superiors in companies scream with laughter at the suggestion of a Meta device with cameras. On the other hand, the business version of Quest 2 has no access to Quest Store or App Lab, in addition to significantly higher costs. That severely limits the use of demos.

With Vive Focus 3, HTC has a business VR headset in its portfolio, but it costs almost $1,500. Is this therefore a good opportunity for Pico, the Chinese manufacturer of VR headsets, to establish itself even further in the B2B sector?

I tested Pico Neo 3 Pro. How does the new VR headset perform? Is it also a solution for private users? How good is the Wi-Fi 6 wireless solution for VR streamingand how well works the DisplayPort cable system?

Pico Neo 3 Pro is currently the solution for Virtual Reality in business: Quick setup, intuitive access to your own files and apps, no login required (except for the Pico App Store), superb image and finally good VR controllers. The tracking is flawless, image clarity is excellent, and the interpupillary distance can be adjusted in three steps.

Native image transmission via DP cable works well (if you manage to get it to work technically). Wireless streaming ran flawlessly with low data transmission. Users have to accept significant losses in image quality here. Therefore, we do not currently recommend the Pico Neo 3 Pro for private use.

Pico Neo 3 Pro is suitable for you if you …

Pico Neo 3 Pro is less suitable for you if you …

The setup works – partly because of the new Pico app – as easily as with the Quest 2: The entire procedure of setting up the gaming area has been adopted almost one-to-one. It works perfectly.

The external battery in the back of the head strap lasts around two to three hours, depending on the intensity of the application. 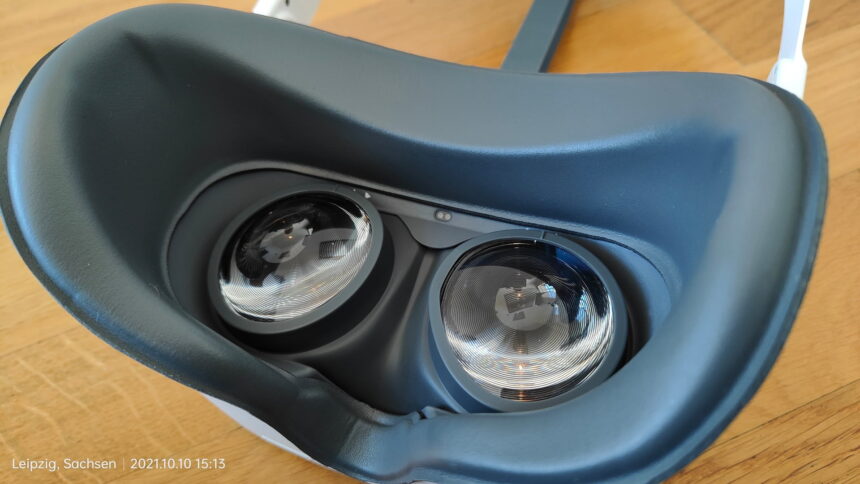 The image is clear and sharp, the lower resolution compared to Neo 2 is not noticeable – the difference is too marginal. Colours are vivid and clear. The black levels settle in dark gray and do not reach the blackness of an OLED panel.

At 98 degrees, the field-of-view supposedly offers three degrees more than Quest 2 on paper. Congratulations to those who can see the difference. The interpupillary distance can be adjusted exactly like on the Meta VR headset in three steps by moving the lenses: IP distances are 58, 63.5 and 69 mm.

The VR headset hardly needs adjustment, the sweet spot is large and sharp. I have to move my eyes far up or to the sides before a certain blur sets in. This is better implemented than in Quest 2.

The Chinese have hardly changed anything about the wearing comfort compared to Neo 2. The upper head strap is hardly adjustable rubber. I can only stabilize the VR headset via the wheel on the rear head mount. That in turn means that the VR headset needs decent contact pressure on the face for a reasonably good fit.

I say reasonably because the back of the head mount, which also holds the battery, is a plastic plate with little padding and curved sides. Aside from the fact that this quickly becomes uncomfortable, it causes Pico Neo 3 Pro to slide back and forth a bit during quick head movements. Dear Pico team: If you’re already imitating Quest 2, then I recommend taking a look at the Elite Strap. 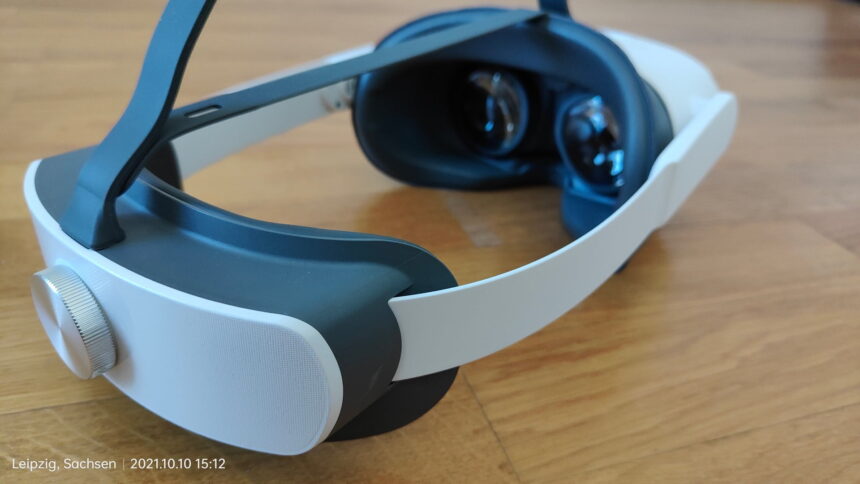 The battery is in the back, and the side head mount adjusts with a dial. The upper mount can hardly be adjusted in a meaningful way.

The standard face pad is also suboptimal: It hardly adapts to the face and leaves gaps at the sides and bottom through which light penetrates. At least glasses fit reasonably well under the pad.

The built-in fan is clearly audible. Whether this is annoying or not is up to each user – I found it to be okay. However, comparing to Quest 2, I would give this point to the latter, which manages without additional fan whirring.

Controllers and associated tracking are the real big improvements over Neo 2, which only had bad magnetic tracking controllers. Four cameras at the corners of the headset provide improved controller tracking.

The new controllers look similar to the touch controllers, but the grip is longer. Although the controllers feel more secure in my hand during fast movements, they do not fit as well as the Touchies. However, the tracking ring is higher than on the Touch, and ensures more frequent collisions of the two VR controllers in applications. The controllers also require two AA batteries each to operate. 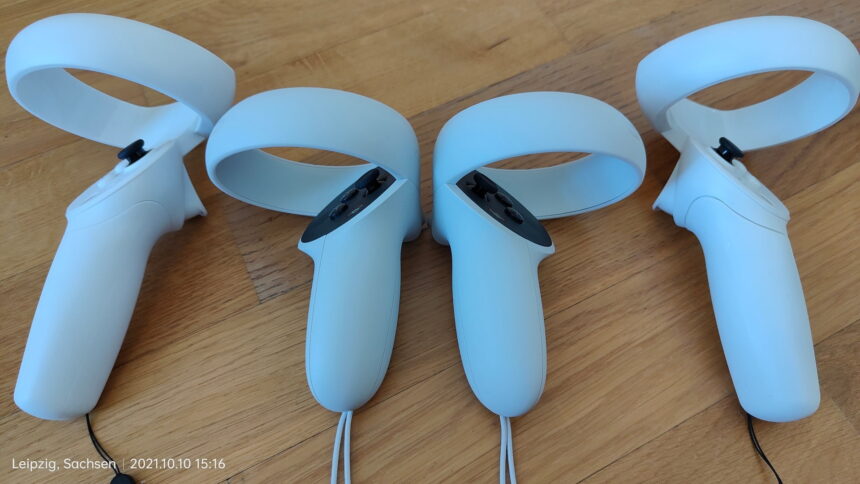 The new Pico controllers on the outside, Meta Touch on the inside. | Image: MIXED

In my test, the tracking worked well beyond any doubt: Fast movements, controllers covering each other, or moving out-of and back into the camera’s field of view did not cause any problems. There was no lag, no noticeable latency and only rarely short dropouts. A few times the controllers floated in the room, for example when I simply let my hands dangle. Maybe this is due to the slightly deeper embedding of the cameras in the corners of the VR headset.

The built-in speakers in the plastic headstrap have more power than the Quest 2 speakers and I also find the sound better. If you want real sound, you still have to use headphones connected via the audio jack.

In the Pico App Store has various titles already ported for Neo 2, such as Gadgeteer or Apex Construct. The offered variety is not even remotely comparable with Quest Store or Viveport. However, Pico could expand this store if the VR confessions of the new owner ByteDance (TikTok) prove to be true.

Apps load quickly, especially business apps are immediately usable. Files and APKs (Android Package Kit) are only two controller clicks away. In combination with the good sweet spot, this is very convenient for VR developers.

Unfortunately, the operating system of Pico Neo 3 Pro does not yet have the stability of a Quest 2. Occasionally, a completely fragmented or black image forced me to restart the headset.

The setup is simple: If a suitable Wi-Fi router or an access point is connected to the PC, the streaming software “Streaming Assistant” has to be installed on the PC and SteamVR has to be started. I then open the corresponding app in the Pico headset and start immediately.

I use a Unify 6 access point with a 5G network, and the average unobstructed distance to the VR headset is less than two metres. The connection is up in seconds and there are no connection problems at all – at least under Windows 10. SteamVR also loads without problems.

Three quality settings are possible via the Streaming Assistant: Fast, Standard and HD. On “Fast”, the resolution is quite low, but there are no perceptible latencies. Even Half-Life: Alyx plays smoothly. However, the image quality is on a lower level, very blurry and only graphics mud in the distance. 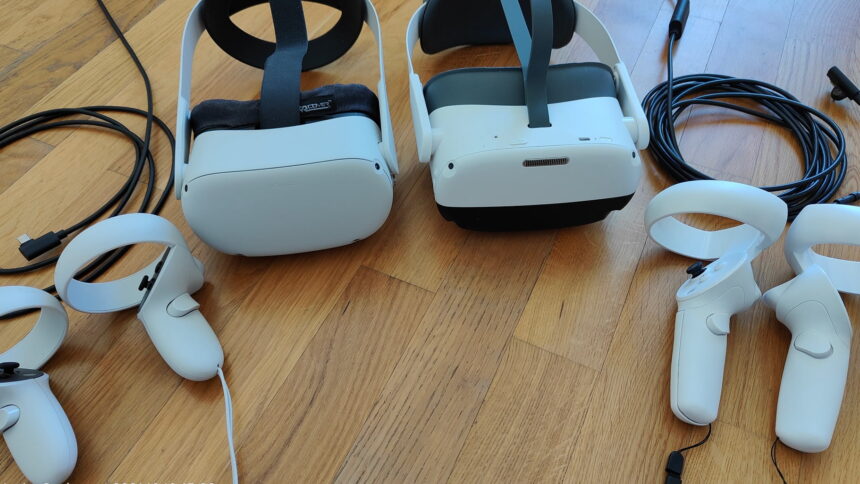 “Standard” delivers a much better visual quality. Half-Life: Alyx looks good, Beat Saber is prettier than the native Quest version. But the data transfer comes to its limit, latencies are always noticeable. Beat Saber on Hard is just about playable – those who strive for error-free tracks will not be happy with it.

And “HD”? Forget that right away – already the simple SteamVR menu (not the environment, just the VR menu!) has such latencies that it is almost impossible to use it.

Overall, Pico is at the very beginning compared to Facebook’s Air Link or Virtual Desktop. Pico Neo 3 Pro does not come close to the top dogs in terms of picture quality and latency.

How good is Pico’s cable solution? There is an Oculus Link-like cable, but it requires a DisplayPort in addition to a USB 2.0 port. Advantage here: The data transfer works natively, which means that the Neo 3 Pro connects directly like a monitor, while Meta’s link solution can only send compressed data with image quality losses through the USB cable. Both ports lead into a single cable that is a bit stiffer than the official Oculus Link cable. The cable attaches to its own USB-C slot on Pico Neo 3 Pro.

It’s unfortunate, however, that the VR headset often insists that the USB cable is not connected when trying to link. Even changing different USB ports did not solve the problem.

Update: Later, after several fresh installations and updates of the Pico software and SteamVR, the DP cable connected successfully, and I was able to play SteamVR apps. This worked flawlessly in the test: The picture is super-sharp, there are no compression losses. The VR headset is very well suited for this use case.

Why is the “very” in parentheses? Because the Pico software does not yet have the stability I would expect. The cable detection should work smoothly every time, and there are bugs that force a restart quite often.

Apart from that, the advantages of Pico Neo 3 Pro for business applications are obvious: Fast setup, quick access to apps and files, clear and sharp image with a wide sweet spot, and a kiosk mode. A login to the Pico account is only necessary for App Store use.

Update: After the purchase of Pico Interactive by TikTok parent company Bytedance, the trust of businesses in Pico is gone. More and more companies are turning away from Pico because the Chinese company raises major privacy concerns and the data is controlled and possibly exploited by the government. This is a risk that companies seeking to maintain a cautious distance from the Chinese market are not willing to take.

The new VR controllers are on par with the Quest 2 controllers in terms of tracking. SteamVR streaming theoretically makes Pico Neo 3 Pro interesting for private users as well, but only under limited conditions: SteamVR apps work only performant in suboptimal resolution, or in decent resolution with regular, minor latency issues. High Definition is currently impossible. The DP cable has to be used for this, which does not always work properly, besides the higher configuration effort. However, when it works, it is a good alternative and plays SteamVR games in outstanding quality. Additionally, there is no support for private users.

However, for companies that want to develop or invest in VR, Pico Neo 3 Pro currently offers the best price/performance ratio in my opinion. It now depends on ByteDance, further development, and marketing strategy to see how successful this device will become.

For consumers, Pico has launched a new version of the Neo 3 Pro: Pico Neo 3 Link is the same VR headset, but with a bigger store.