I tried out the Pico 4 at Gamescom 2022. How good is the new VR headset compared to Quest 2?

Meta Quest 2 is currently pretty unrivaled. The competition for standalone VR headsets has so far been limited to Pico Neo 3 Link, which has some good features, but could not yet keep up with the top dog.

Pico Interactive is now attacking Meta head-on with the Pico 4 VR headset, which was unveiled on September 22, 2022. Pancake lenses and a significantly reduced weight as well as a competitive price should enable Pico to poach Meta’s target group and also tap new VR enthusiasts.

Does it work? I checked the Pico 4 out at Gamescom 2022. These are my impressions.

Pico Neo 4 is a relief

As soon as I pick up the Pico Neo 4, I notice the much slimmer design resulting in lighter weight. The Neo 4 also looks different: It’s less clunky than previous standalone VR headsets. It tries to be more elegant, and it succeeds. 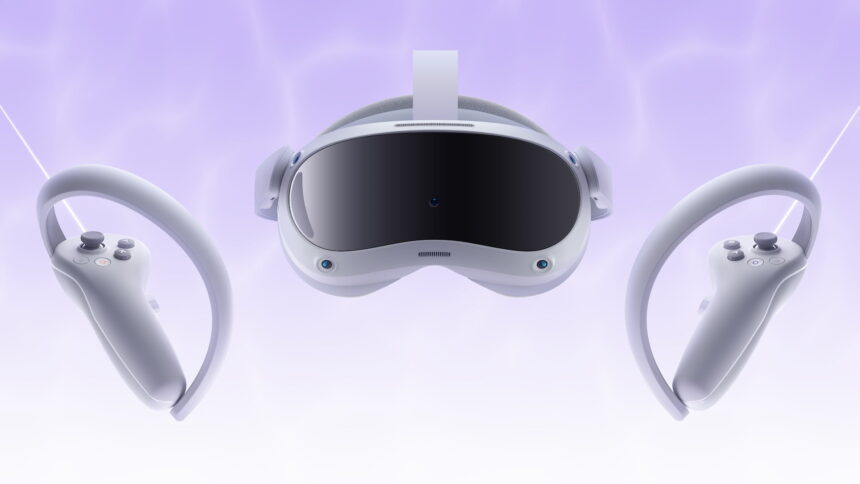 When you put it on, the full extent of the lower weight becomes clear. According to Pico, the headset weighs only 295 grams at the front, about 40 percent less than Quest 2. Together with the head mount and battery, it weighs 586 grams, says Pico. I feel the change immediately, especially at the front, where I feel much less weight. That and the fact that the battery has a balancing effect at the back of my head leads to more comfort, which should be especially noticeable during longer VR sessions.

Speaking of comfort, the head mount hasn’t changed much. It doesn’t sit well on the back of my head, and I have to tighten the headset very firmly to keep it stable and not slip when I move my head quickly. Why Pico didn’t put more work into a good head mount is beyond me – but Meta also didn’t exactly a good job with their standard headband for the Quest 2 either.

Sharp image and a perceived larger field of view

The weight reduction comes mainly from the pancake lenses, which are now flat and plain and no longer have the dreaded Fresnel rings that cause light flares. Since the flat lenses are closer to my eyes (my glasses fit easily under the VR headset), I get the impression that the field of view is larger than with other VR headsets. Pico specifies the FOV at 105 degrees.

The color passthrough is very cool. When I move my head through the virtual Guardian grid, the image switches to passthrough. It makes a big difference to see the real world in color and with high sharpness through the VR headset. There was no time for a detailed test of the latency and possible distortion effects, but it looked convincingly good in my short test.

New VR controllers, but no cable for PC VR

The Pico 4’s new VR controllers with the tracking ring running diagonally across the back of the hand feel heavier than, for example, the Quest 2’s touch controllers. This is partly due to the two replaceable AA batteries. However, they fit perfectly in the hand and allow better interaction of both hands or controllers in proximity to each other – for example, when reloading in Half-Life: Alyx.

I cannot yet judge the sound of the built-in speakers – it was quite loud at the Pico booth at Gamescom, where a DJ was playing. Wi-Fi 6 is integrated into the headset. If the Pico software plays along, wireless streaming should be possible. I can’t confirm that definitively yet, though. Next year, a Wi-Fi dongle is supposed to be released that allows a direct wireless connection to the PC. Meta is also working on such an accessory for Quest.

Wireless streaming is also the only hope for PC VR fans with the Pico 4: The DisplayPort cable is gone, and there is no replacement, for example a USB-C port for video streaming like the Quest 2 offers. The Pico 4 is only meant for native, mobile VR, Pico says. Those who want PC VR streaming should use the Pico Neo 3 Link. However, the planned Wi-Fi dongle makes this argument look pretty thin.

No doubt: Pancake lenses, sharper displays, color passthrough, and lower weight are clear advances. In this respect, Pico beats Meta for the first time: Quest 2 cannot keep up here. The Pico 4 is heading in the right direction, and it felt pretty good even in my short test session.

I remain critical about the comfort: The head mount remains moderately comfortable and could use a decent upgrade. The VR controllers are good – a bit heavier, but they fit perfectly in the hand.

Wi-Fi streaming will probably only become an alternative with the dongle. Pico has completely omitted the cable, which, I think, is a mistake because it brings another big issue to the fore: Pico Interactive lacks the breadth of apps and VR games.

The Chinese company is making efforts to bring more apps and games to the store (e.g. The Walking Dead: Saints & Sinners 2), but Meta simply has a big head start here. If I can’t access SteamVR either, I’ll have to think twice about whether it’s worth it for me. The price of 429 Euros for the 128 GB version and 499 EUR for the 256 version is definitely good – and a challenge for Meta. Bytedance shows that it wants to fight in the same weight class as Meta.

Extensive tests will now have to show how well the Pico 4 proves itself in daily use, and whether the first positive impression can be confirmed. Pico 4 will be released in many European countries on October 18, 2022. A launch date in the USA is not known yet.