The Quest 2 gaming showcase was a disappointment

After a disappointing gaming show last year, the Quest 2 Showcase 2022 went only marginally better. Overall, it was another disappointment. Where are the big guns?

This show should have been a blowout home run.

Quest 2 had a great Christmas season and after a long dry spell, the old hands as well as the newcomers desperately need reasons to get the VR headset out of the drawer. Resident Evil 4 was the last major title to shine and was released half a year ago.

You have to keep in mind that the Gaming Showcase only takes place once a year, and the first one a year ago disappointed across the board. This time, Meta had to score. And it didn’t.

Twelve games were presented at the Meta Quest Gaming Showcase. Two of them are DLCs. Nine games are either sequels or have already been announced. The only real surprise is Ghostbusters VR, and that’s based on a brand that was big in the 80s and 90s and has suffered noticeably in recent years with mediocre remakes and games. At least the VR adaptation is being developed by a capable VR studio.

My personal highlights of the show were Red Matter 2, Bonelab, and the previously announced Saints & Sinners 2. All three come from indie third party developers.

Meta puts the brakes on expectations

Meta flashed a text board before the start of the Gaming Showcase that said all the VR games shown were scheduled for release within the next twelve months.

“That said, there are plenty of amazing games still in development that aren’t in today’s showcase. Some are further out. Some just weren’t quite ready to show yet,” Meta writes. 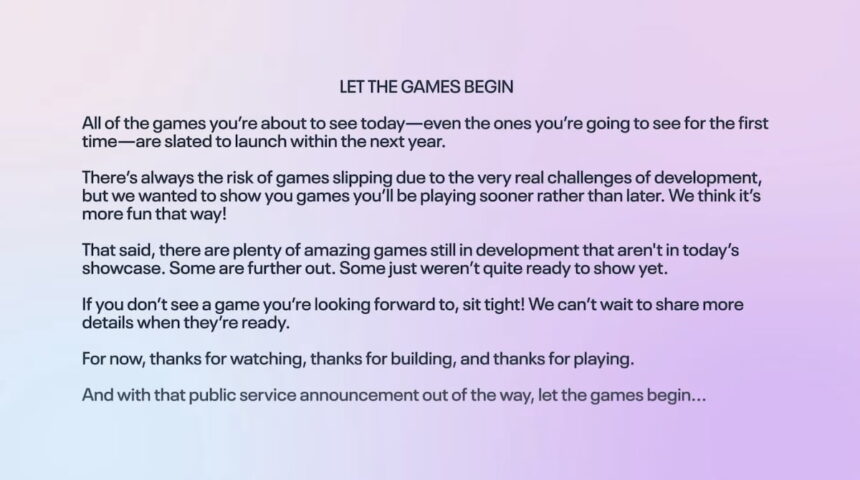 Were these already the highlights for the next year as well?

The next opportunity to unveil big games will be at Connect 2022 in the fall. However, the Metaverse and new hardware will probably be in the foreground there. There were hardly any new games to be seen at the last Connect as well.

The long wait for big titles

So where is the promised wave of AAA games? Even the retired PC VR headset Oculus Rift has more big productions to show. Lone Echo 1 & 2, Asgard’s Wrath, Stormland, Medal of Honor: Above and Beyond come to mind.

Where are the big Ubisoft titles or GTA: San Andreas, where are the in-house developments of Oculus Studios? Meta has bought up six VR studios since the end of 2019 and none has announced new titles yet. Even Horizon (European launch, hello?) had nothing new.

The answer to these questions was given by Meta itself: Great games don’t happen overnight. They will have to wait at least another year – or longer.

Meta is reserving the big titles for the release of Meta Quest 3, which could come out as early as fall 2023. That’s a long wait in the industry, which gaming giants like Nintendo, Sony and Microsoft will make better use of than Meta.

Is Sony stepping into the breach?

What was I expecting from Meta? I would have looked forward to a new, exciting brand from one of Meta’s studios, a role-playing game with depth, a port of an (extensive) classic game, a live service game with great multiplayer, or an open-world game. Something that proves that big, deep and long games are possible on Quest 2.

The second Gaming Showcase was better than last year’s, but that wasn’t hard. Last year’s show consisted almost entirely of DLC. If Meta only presents games once a year, it has to make the most of this opportunity.

Speaking of the presentation, it too lacked any passion. Ruth Bram’s moderation was as distant, cool and joyless as one is used to from product presentations at tech conferences. A plea to Meta: Bring Jason Rubin back on stage!

As a VR gamer, I now turn my attention to Sony again. But here, too, it looks like we’ll have to wait a bit longer. According to recent rumors, the Playstation VR 2 won’t be released until 2023, and it remains to be seen how much the company will invest in big VR games.