Playstation VR 2: Release, resolution, controller – all you need to know

When will PSVR 2 be released? Will there be a new tracking system and new VR controllers? Here are the latest answers.

In this information hub you will learn

The Playstation VR was a successful VR headset, but it also had numerous problems, such as outdated tracking. But Sony continues to focus on VR, at least a new VR headset for Playstation 5 is coming. In this article you will learn everything you need to know about the Playstation VR 2.

What does Playstation VR 2 look like and how comfortable will it be?

Sony has shown Playstation VR 2 in another blog post with various render images. It is positively noticeable that Sony has modernized the VR headset in terms of design, but they have also adopted good and important elements from PSVR. 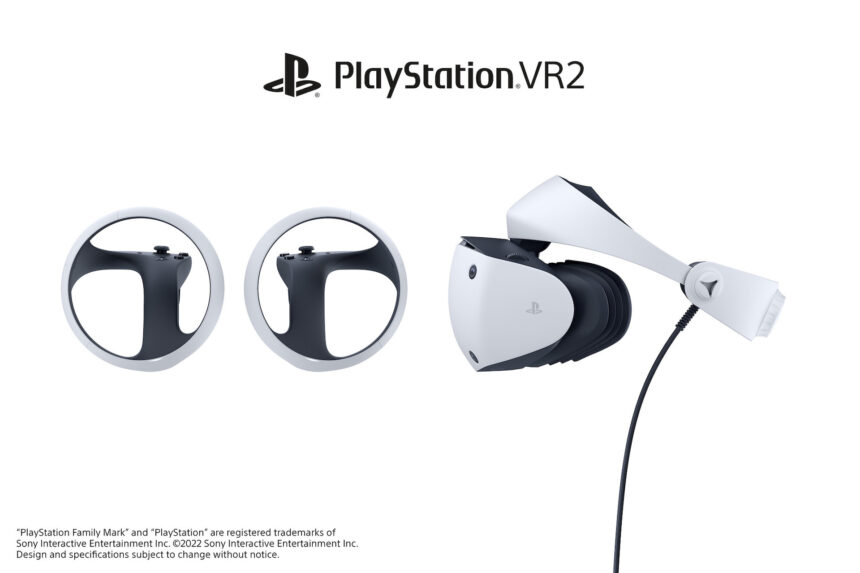 PSVR’s comfortable head mount is still present. In addition, the front of the headset will once again be slidable, i.e., it can be pushed back and forth and thus guided to the face without contact pressure. A rather voluminous “accordion” face mask ensures the exclusion of light. Haptic vibrations are transmitted to the face through the Halo headband’s forehead support.

What resolution and field of view will the Playstation VR 2 have?

Varjo Aero has currently the best display with 2,880 × 2,720 pixels per eye, but it is also the most expensive VR headset for home use at the moment. Sony’s new headset is below that, but still in the upper range of current VR glasses. The Playstation VR 2’s 4K HDR OLED displays resolve at 2,000 x 2,040 pixels per eye.

Playstation 5 already supports virtual reality by its basic design, such as the chip architecture. Thus, no additional hardware will be necessary between PSVR 2 and Playstation 5.

Note: Using PSVR with PS5, on the other hand, still requires the additional hardware of PSVR, including processor box and cable clutter. A camera adapter is also required.

The following specifications of the PSVR 2 are known:

Will the PSVR 2 come with eye tracking and face tracking?

Sony researchers consider eye tracking and the associated “Foveated rendering” (maximum graphics details are only calculated at the point the user is looking at) to be particularly important for the future of Virtual Reality.

The Playstation 5 console benefits enormously from this because computing and graphics power can be used for a considerably smaller display part, thus saving power while improving the picture.

The Playstation VR 2’s lens distance to adjust the interpupillary distance (IPD) will probably be configurable via a setting dial.

Will there be an inside-out tracking system for PSVR 2?

Tracking is the biggest obstacle of PSVR. Fortunately, this changes with PSVR 2: Four cameras in the VR headset are responsible for spatial tracking and tracking of the new Sense controllers.

In See-Through mode, the front cameras display a black-and-white image of the physical world around you. This allows for orientation, such as reaching for the Sense controllers or a glass of water. Passthrough mode is activated via a button on the headset or a menu button in VR.

The play area is captured by an automatic scanning system and can then be edited with the Sense controllers.

Perhaps this will also allow for the first mixed reality experiences like Quest 2, depending on whether the depth is displayed correctly and largely without distortion.

For Sony researcher Mallinson, the comfort of VR headsets is a decisive factor. PSVR is way ahead in terms of wearing comfort; there are hardly any VR headsets that are more comfortable to wear. Nevertheless, the user comfort can still be improved, for example, by eliminating the stiff cable and the complicated connections.

PSVR 2 connects to the Playstation 5 console with a single, more flexible cable than the current system. It is still unknown whether this is a custom-made cable similar to the official Oculus/Meta Link cable. A wireless variant is not yet off the table, but it is highly unlikely.

Will there be new PSVR controllers?

The Sense controllers are reminiscent of the touch controllers of Meta Quest 2, but the tracking ring goes around the VR user’s wrist.

So, you reach into an implied sphere and embrace the controller grip there.

The tracking rings use infrared technology, so they are no longer based on the light tracking of the first PSVR generation. The new system should allow accurate tracking similar to Oculus Touch.

Similar to Touch or the controllers of the Valve Index, it detects the thumb, index, and middle finger positions via capacitive sensors without the need to press buttons. Thus, gestures can be implemented with the virtual fingers, such as operating switches with a stretched index finger.

The DualSense technology of the PS5 controllers is also integrated into the VR controllers. The excellent haptic feedback, for example the resistance when pulling a trigger, will make a clear qualitative difference to the competition.

The controllers come with the following buttons and sticks:

What audio solutions may we expect?

The biggest disappointment of PSVR 2 is the absence of an integrated sound solution. We will have to connect headphones or use the speakers of our sound systems if necessary. The latter usually has too much spatial distance to the action in VR, the former increases setup times and lowers comfort.

Sony announced in an official blog post that Playstation 2 will be released on February 22, 2023. Pre-orders should arrive within the first week after release.

What VR games will be released for Playstation VR 2?

Horizon Call of the Mountain was announced as part of the announcement of the technical details of the new Sony VR headset. This is a VR spin-off of the successful action adventures Horizon Zero Dawn and its sequel Horizon Forbidden West.

In Horizon Call of the Mountain, we do not play Aloy, the heroine of the flat screen games. However, we will meet her in the VR game, as well as other familiar characters. In the gameplay trailer above, we see a vast landscape and free movement. Warrior Ryas uses a rope and a pickaxe to traverse the world. The game will also be released on February 22, 2023.

More confirmed VR games for Playstation VR 2 can be found behind the link.

If you have a PS5 HD camera, you can record yourself playing in VR. The Playstation 5 combines the VR image with the camera image, making VR livestreaming much easier. The livestream can be broadcast on the usual channels such as YouTube or Twitch.

Sony also introduced a cinema mode that allows gamers to view the PS5 user interface and all 2D content on a virtual screen in HD resolution and HDR. The supported frame rates are 24/60 and 120Hz.

Where can I find a Playstation VR 2 review?

You can read our preview of the Playstation VR 2 in the linked article.

How much will PSVR 2 cost?

The price of the Playstation VR 2 is (not) a surprise: The basic PS5 VR headset with Sense controllers and stereo headphones costs $550.

In a bundle with Horizon Call of the Mountain, the PSVR 2 costs $650. You can pre-order on the official Playstation Store.