After the partnership with HTC is before Half Life VR: With the Valve Index VR headset, the company behind Steam goes its own VR way. And with success?


In this review, you will find out

Valve’s first own VR headset offers a resolution of 1,440 by 1,600 pixels per eye. Thus, Valve Index does not reach the sharpness of HP Reverb (review), but it is ahead of Oculus’ current PC headset Rift S.

Thanks to LC displays with a full RGB matrix (there are three subpixels for each pixel – red, green, blue), the image is sharp and rich in contrast. The Screen Door Effect known from the first generation is no longer perceptible for me. Despite LC displays, the colors are also impressive: Colorful VR titles offer a rich picture, decent black levels provide a convincing immersion in the outer space of “Elite: Dangerous”.

Sharpness and colors are particularly noticeable in VR games. Anyone who has ever switched from a monitor with a lower resolution to a correspondingly higher resolution screen knows the effect: There are suddenly considerably more details to discover, the hit rate in shooter games is higher, and the distant, snow-covered mountains of Skyrim VR are finally no longer a pixel mush.

Index is also fun to use outside virtual games: The combination of rich colors, good resolution and an above-average field of view (more on that in a moment) will lure me to the VR movie theater Bigscreen Cinema more often in the future.

The current unique selling point of Valve Index: The variable frame rate of up to 144 hertz. You can switch between 80, 90, 120 or 144 hertz in the SteamVR menu, even smoothly without restarting the VR app.

High frame rates are particularly noticeable in titles like Beat Saber: My lightsaber wielding has never felt more precise. However, more demanding titles require strong hardware to chase 120 or even 144 frames per second through the cable into the VR headset.

The following video shows an image comparison between Reverb, Rift S and Valve Index, recorded directly through the lenses of the VR headsets.

The field of view of Valve Index is noticeably higher than that of the Oculus headsets, HTC Vive and Cosmos or HP Reverb. Valve specifies up to 130 degrees depending on the setting and face shape.

The distance of the displays to the eyes can be adjusted via a dial. Thus, whoever touches the Fresnel lenses with their eyelashes can enjoy the widest field of view – provided he or she does not wear eyelash extensions.

The wider field of view offers many advantages: In VR simulations, I have more instruments in view; in virtual cinema, I can see the entire screen without having to change seats. The tube effect is reduced: While HTC Vive and Oculus Rift were still tight diving goggles, Valve Index has at least reached the level of ski goggles. 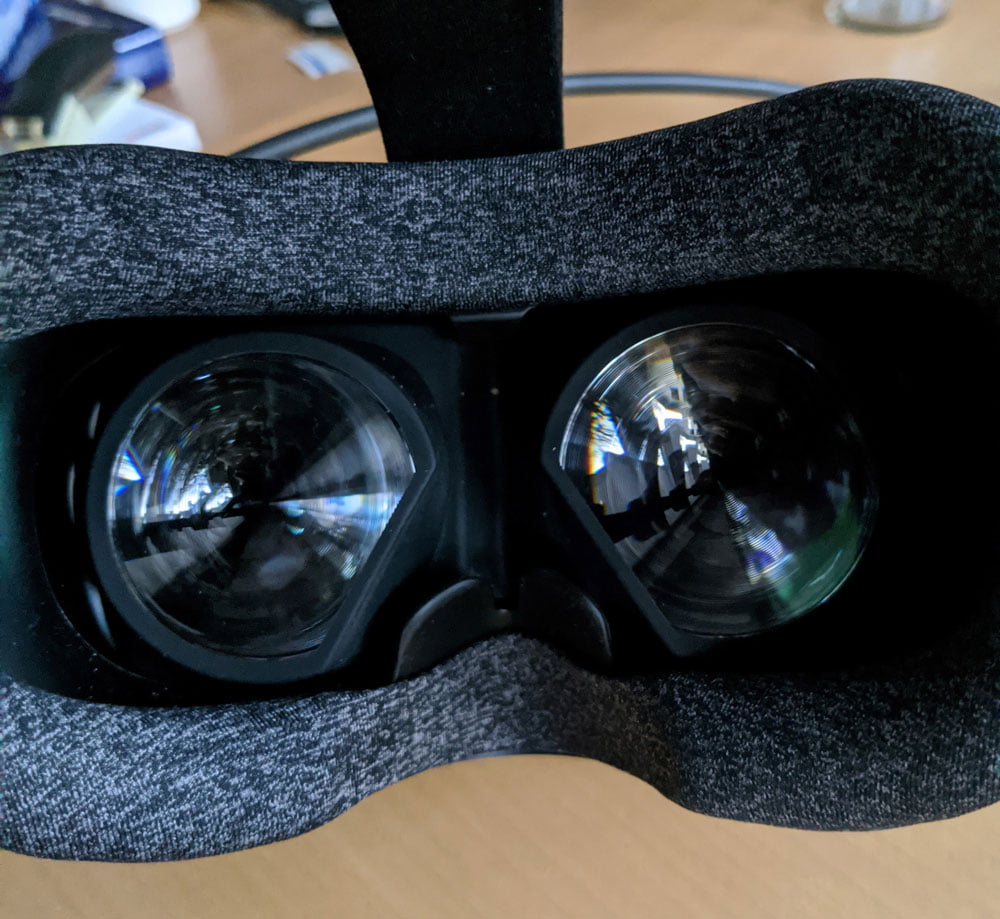 With slightly larger lenses and slightly tilted displays, Valve creates a field of view of up to 130 degrees. The soft padding reduces contact pressure. Image: MIXED

The so-called “sweet spot”, which is the center of the lens where the image reaches the highest sharpness, also turns out larger than on HTC Vive. With an eye distance of around 70 mm, the sweet spot of Valve Index is also much larger for me than with HP Reverb.

For comparison, the HP Reverb or Oculus Rift S lack the mechanical slider. The lenses are fixed to an interpupillary distance of 63 mm. Those who are below or above that are out of luck, which can even render the VR headset unusable.

Overall, the image quality of Valve Index is far ahead of HP Reverb for me, despite its resolution advantage.

For readers in a hurry: Valve builds the most comfortable VR headset I’ve had the pleasure of testing so far with Valve Index.

For this, Valve relies on a head mount that is reminiscent of HTC’s Deluxe Audio Strap. A ring goes around the head, which I can tighten via a dial. A strap with a Velcro fastener runs over the head and carries the weight of the VR headset.

This way, the head mount can easily be adjusted to individual needs and distributes the weight over the head instead of pressing the headset against my face. Thus, Valve Index is much less front-heavy than Meta Quest, for example. If adjusted correctly, it sits comfortably – even during VR excursions lasting several hours. 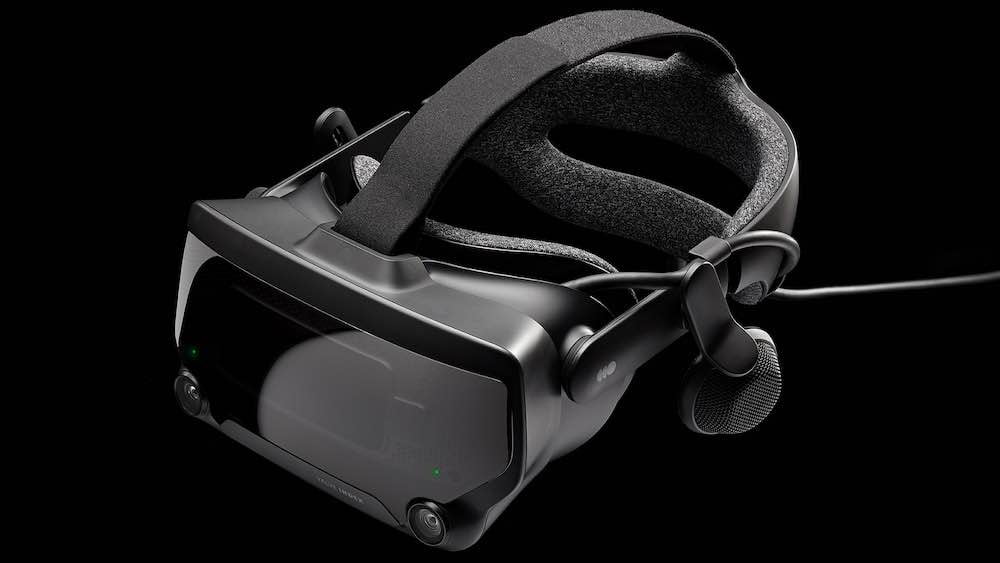 The head mount keeps the weight of the headset on the head. Soft pads protect against pressure. The excellent-sounding ear speakers are located on the side. Image: MIXED

The face pad is pleasantly soft and nestles comfortably against my face. Thanks to magnetic attachment, it can be easily removed.

Valve also includes an additional cushion that I can use to make the head mount more comfortable in the back. This increases the comfort depending on the head shape and allows a stable fit even for smaller heads.

Valve Index comes with two integrated ear speakers that are placed a few inches from the ears. Their sound is great and beats the Deluxe Audio Strap for Vive.

The open design – the speakers float in front of the ears instead of resting on them – also noticeably increases wearing comfort without sacrificing sound quality. The disadvantage is that anyone in the immediate vicinity is able to listen.

Like HTC Vive, Valve Index is powered via three ports: power connector, USB 3.0 and DisplayPort. HTC’s familiar distribution box is not part of Index; all cables lead directly into the VR headset.

At five meters, the cable is long enough for room-filling VR. It is also more flexible than the 3-in-1 cable of Vive or the extremely stiff, shorter cable of HP Reverb. Valve has not announced a wireless solution yet.

Valve’s SteamVR tracking from Valve Index relies on two external base stations, just like HTC Vive. The cameras built into the VR headset are for passthrough mode, not for tracking.

The Valve Index complete package comes with two SteamVR 2.0 base stations. VR headset and controllers are also compatible with the SteamVR 1.0 base stations of HTC Vive and Vive Pro (review).

Valve’s tracking solution has one major drawback: It is external instead of fully integrated into the VR headset.

Thus, users who don’t want to have base stations on the wall, or have no room for tripods, or want to bring the VR headset over to friends, should rather go for VR headsets with inside-out tracking. We recommend Meta Quest 2 (review) with a PC connection via Oculus Link.

However, the external tracking solution with SteamVR 2.0 is also the most accurate on the market: No matter if the VR controllers are above the head or behind the back – the base stations reliably track even the finest movements. 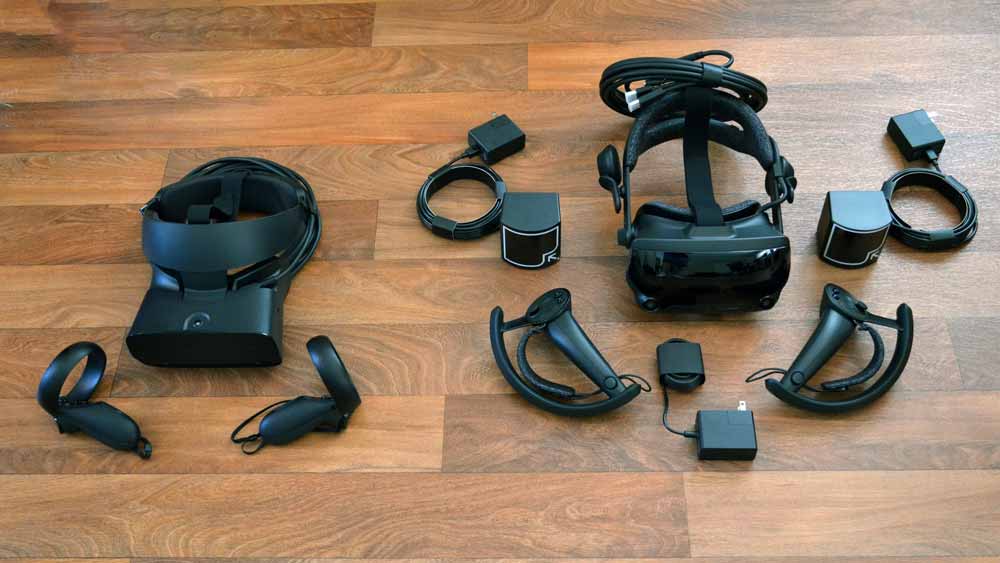 Oculus Rift S on the left, Valve Index complete package on the right. The external base stations make the setup of the Index more tedious, but the tracking is more accurate. Image: Road to VR.

Valve’s Index is a high-resolution VR headset with high comfort and good sound. However, the star of the VR set are the Index controllers.

They can be attached to the hand via adjustable straps and thus do not fall off when the hands are open. Such a mount is available for upgrading the Oculus Touch controllers from various third-party suppliers.

However, Valve’s solution is integrated into the controller: The strap is fixed by pulling, and the tension is released again by pressing a button. Below the analog stick, I can adjust the position of the strap to my hand size in four steps. 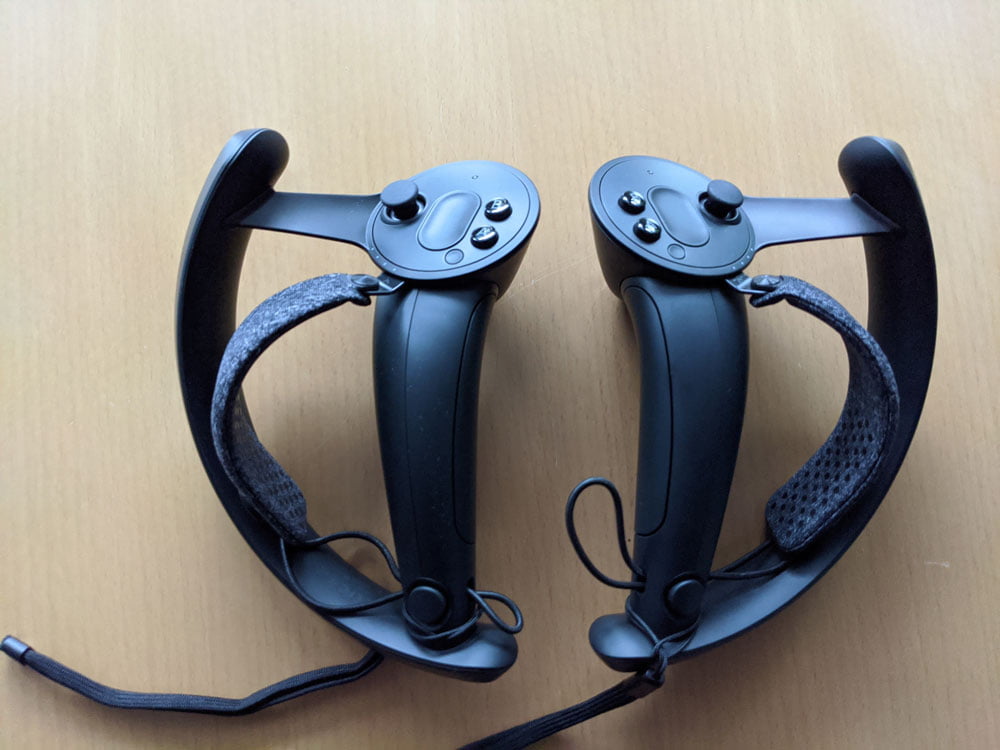 The Index controllers are equipped with an analog stick, trackpad and mechanical buttons. The grips track finger movements. The straps secure the controllers to the hands. Image: MIXED

Sensors and a trigger are built into the grips to detect the position and degree of curvature of the fingers. At the top are two buttons, a touchpad and an analog stick, which the controller uses to detect my thumb position.

The controller also detects how hard you squeeze, which feels natural and comfortable. When I pick up a VR object, I really grab it instead of just pressing a button. The same goes for throwing: When I want to let go of the virtual object, I open my hand – and the controller doesn’t fly along.

If supported by the VR title, I can easily open my hands and slide them into a better position on a handle, for example. In social VR, finger tracking enables more extensive body language.

For me, Valve’s Index controllers are a real innovation: They increase user comfort and create new gaming and application scenarios. 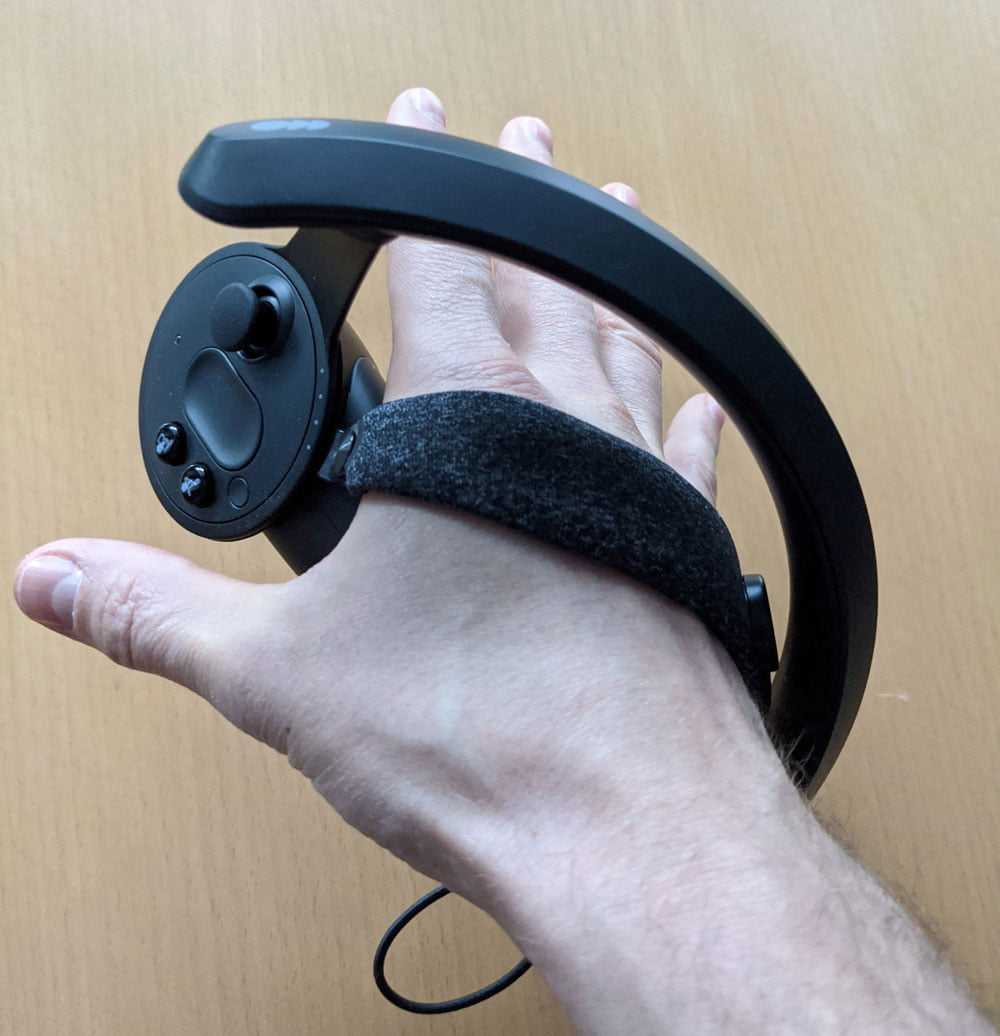 Even with my hand open, the controller sits firmly on my hand. In the virtual world, my character also has his hand open. This makes for a believable VR gripping sensation. Image: MIXED

Review conclusion for Valve Index: The best current VR headset for the PC.

Valve has delivered an excellent high-end VR headset with the Valve Index. It is currently clearly the best PC VR headset for enthusiasts – provided the necessary pocket money and the will to make the somewhat higher effort for tracking.

The displays offer a high resolution, crisp colors and variable frame rates. Thanks to a mechanical adjuster of the interpupillary distance, you can adjust the lenses perfectly for your face. The excellent sound of the integrated audio solution as well as the great wearing comfort and the slightly wider field of view are additional advantages.

The cable is long and flexible enough for room scale VR applications. The Index controllers are innovative, handy, and flexible to use thanks to the analog stick. The SteamVR tracking is precise and reliable across all applications, just like in HTC Vive.

Due to the external tracking, Valve Index is quite location-bound. Therefore, I cannot quickly move the VR headset into the living room or take them to a friend’s house. In addition, Index offers a lot, but it is expensive: The total package with VR headset, controller, and tracking system costs 1,080 Euros.

So, is Valve Index already VR 2.0? It isn’t. But Valve’s VR headset is an excellent upgrade and a successful conclusion of the first generation.

Valve Index is suitable for you if you …

Valve Index is not suitable for you if you …

You can get Valve Index here: