We tested HTC Vive Pro 2. Are the high resolution and the enlarged field of view a reason to buy for PCVR fans?


HTC has an eventful past in terms of VR. After the Taiwanese company started quite explosively with the original HTC Vive in 2016, the successors had a hard time holding their own in the market.

HTC Vive Pro 2 is also primarily intended for companies. But, won’t complain being used by well-off home users either. We reviewed Vive Pro 2 and will tell you whether it is worth buying here.

HTC advertises its new VR headset with a resolution that is very high on paper. A whopping 2,448 x 2,448 pixels per eye is supposed to provide a crisp image and kill the Screen Door Effect. And they do just that.

The image in the sweet spot is razor-sharp, and the image display offers a clarity comparable to Pimax’s 8KX (which offers 4K per eye). The color representation is rich, the black levels are very decent for an LC display and the so-called screen door, the pixel structure of the display, is only slightly visible when I really look for it in bright areas. I could not determine chromatic aberration (that is, colored fringes at graphic transitions). 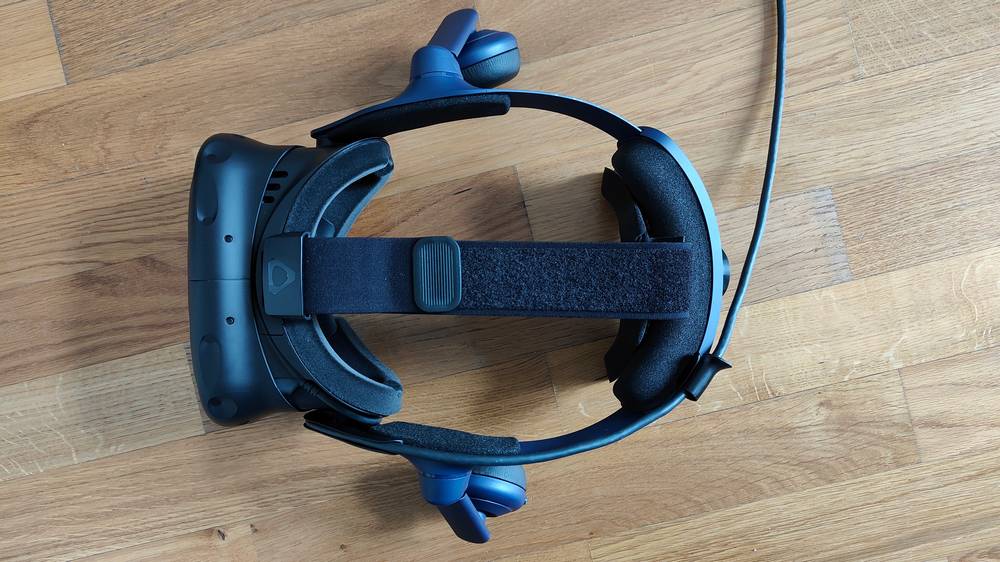 Vive Pro 2 from above: Quite powerful and now also with high-resolution. | Image: MIXED

However: The image is still not clear. I would like to resolve the apparent contradiction with a – possibly somewhat arbitrary – distinction between image resolution and image impression. While the image resolution is wonderfully sharp in the middle of the sweet spot without movement, the overall impression is always a bit “foggy” or “blurred” during normal use, i.e. when looking around and interacting with VR elements.

The reason for this is, among other things, the distinct glare effect of bright graphic elements in the field of view. For example, white text attracts a ray frame or “halo” that “travels” with head movement. I’ve never seen this refraction of light from the new dual Fresnel lenses so clearly and so distractingly in VR headsets before. Oculus Quest 2 (review) also has this glare effect, but it is hardly noticeable there.

Using Vive Pro 2, this glare effect sticks to all bright image elements, which leads to a blurry image impression, although the actual image resolution is sharp. In addition, there are strong god rays (light rays that emanate from a bright light source in the image and refract on the lens). The grooves of the Fresnel cut are unpleasantly prominent – sometimes half the field of view only consists of illuminated Fresnel circles. 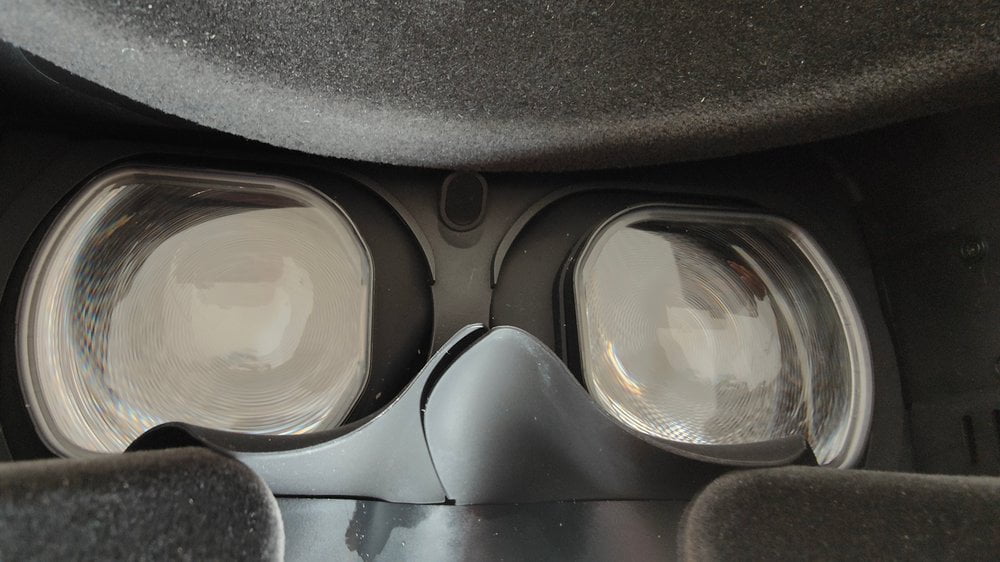 HTC used a dual Fresnel lens system for Vive Pro 2, probably to increase the field of view. One drawback, however, is the possibility of much stronger light reflections. | Image: MIXED

Heavy glare, strong god rays, and dominant Fresnel rings in bright scenes cause the visual contradiction. The static image resolution is of enormous sharpness – but the overall impression in motion is as if I’m looking through a veil of varying thickness depending on the lighting conditions. When playing, Half-Life: Alyx, for example, I can nearly forget about it – but especially in menus, the discrepancy between resolution and impression is always noticeable.

So far, everything referred to about the image is in the sweet spot, which is a bit easier to find than in the Cosmos headsets. But the sweet spot seems to be particularly distinct laterally to me. Vertically, the sweet spot is much narrower than in other VR headsets, even the original Vive.

This leads to a strong blur especially in the upper and lower third when I look up or down with my eyes without moving my head. Even large menu headers in the SteamVR environment become very blurry in the upper field of view, and even in games like Project Cars 2, the fixtures blur. Unfortunately, you don’t get used to this very quickly.

Round gets wide: HTC’s field of view experiments

The image only looks normal in the narrow central horizontal strip of the field of view. If I move my eyes up or all the way down, the image blurs. A reason for this might also be the new field of view. The data promises a 120-degree horizontal field-of-view – and yes, the field of view does indeed look wider horizontally. Measurements show values around 116 degrees, depending on how close the eye gets to the lenses. 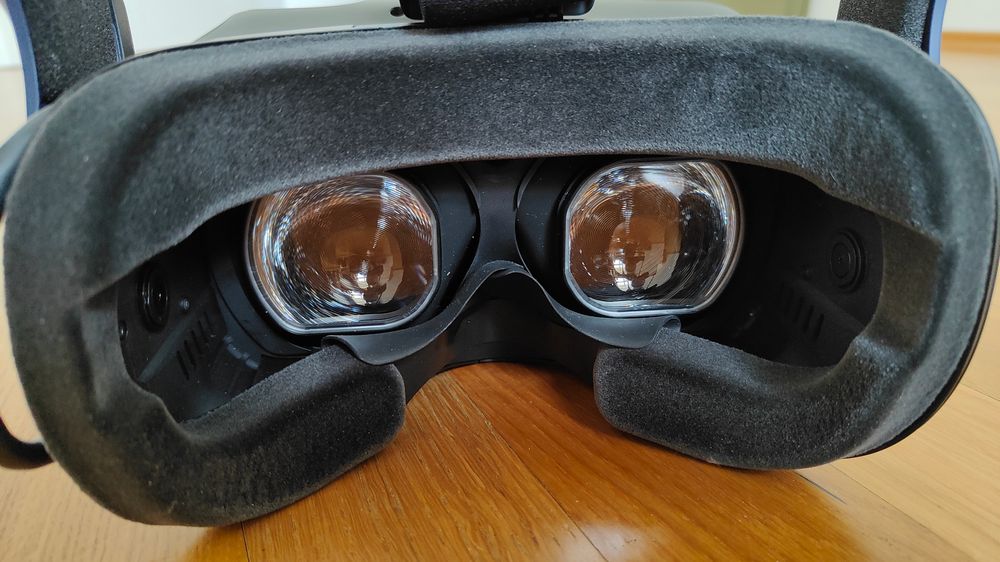 HTC has cut off the lenses at the top and bottom. Image: MIXED

The general impression of the laterally larger field of view is good. Although the image becomes blurry towards the lateral edges, it is nowhere near as unpleasant as in the upper area of the lenses. Normal use results in a quite decent, wide, horizontal image that pleasantly differs from the usual “toilet roll view” of VR headsets.

Only top graphics cards are enough

Vive Pro 2 needs a powerful computer to conjure up the highest resolution at 120 Hz on the headset. This setting is called “Extreme” in the Vive console. The SteamVR render resolution also has to be checked manually: Automatically, Steam sets 150 percent for me (3,080 x 3,080 pixels per eye). If I go to 100 percent, it is still 2,648 x 2,648 pixels per eye.

Sweet spot, image clarity, and impression do not change either, by the way, which indicates that the lens solution is the real problem of the Vive Pro 2. You cannot go much higher than 150% render resolution – then the Vive Pro 2 gives up the ghost for me.

The Ultra setting of the Vive console also brings the full resolution, but “only” at 90 Hz. If I go lower (High setting, 3,672 x 1,836), I no longer get the promised resolution – the difference is then noticeable by a somewhat softer image display when you look closely. This increases the further I turn down the settings – in performance mode with 2,448 x 1,224 pixels total resolution, even a layman can see the difference because of a visibly blurred image.

The rest is the same Vive Pro as three years ago

Otherwise, there is nothing new about Vive Pro 2 – apart from the displays and lenses, it is a Vive Pro. The comfort of the beefy VR headset with the charm of a modified full-face helmet is okay – but the contact pressure, especially in the forehead area, is also significant. In long sessions, Vive Pro 2 is more uncomfortable than Quest 2 with Elite strap in my experience.

The thick, stiff cable of Vive Pro loses in comparison with the thin Oculus Link cable. My glasses fit perfectly under the VR headset and I can adjust lens distance and IPD comfortably. The low-frequency sound is only good when I am placing the earphones directly on the ear. The microphone is simply garbage by today’s standards. 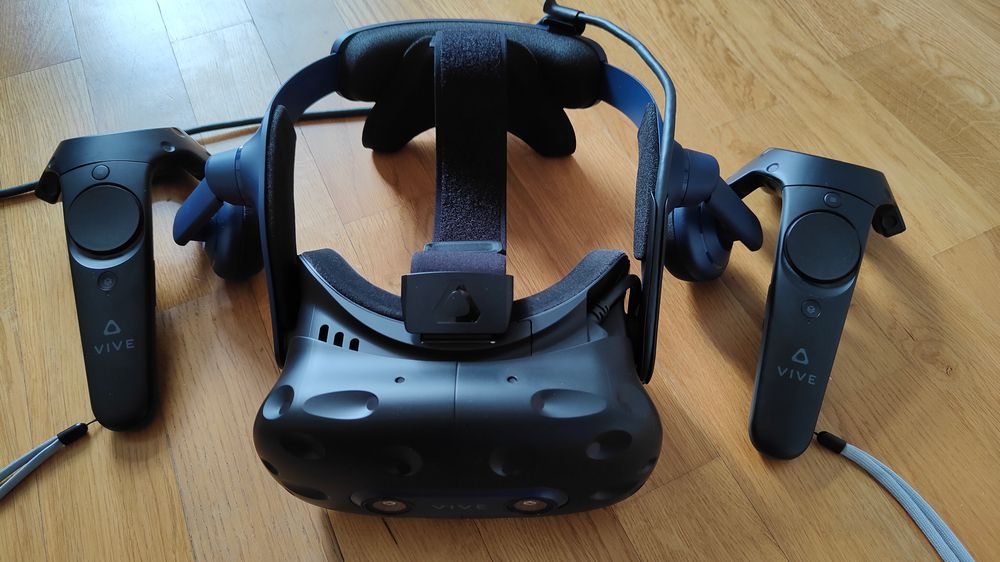 Vive Pro 2 only differs from Vive Pro in terms of displays and lenses. HTC has also not replaced the old Vive controllers so far. | Image: MIXED

SteamVR tracking via the two base stations is precise as usual. The advantage here: Those who still own the old 1.0 base stations can use Vive Pro 2 directly without restrictions. The same applies to the controllers, the so-called Vive Wands.

These old stone-age clubs are good for self-defense, but not for intuitive and comfortable use of VR apps and games. The Vive Wands have never been ergonomic, as advertised by HTC, and they are not in the current revival. New controllers are only available for Vive Focus 3. Only the “market strategists” at HTC know why. I recommend the Index (review) controllers instead, which can also be used with Vive Pro 2.

For the sake of completeness, I am also mentioning the option of putting a wireless module on your head. But, that doesn’t allow for full resolution or 90 Hz frame rates.

HTC Vive Pro 2 review summary: Who wants it – and why?

The installation of Vive Pro 2 really annoyed me. Even though the base stations have been hanging on my walls for a long time, cable tangle, multiple sockets for the linkbox and base stations, reconnecting and disconnecting display ports and USB cables – it’s a lot. Additionally, there is all the software that needs to be installed, set up, and updated: Vive console, Viveport, SteamVR. SteamVR regularly crashes after changing settings on the Vive console.

Monitor conflicts cause the Vive linkbox to shut down because it locks up my PC monitors on reboots. Some of this is a one-time effort, some of this is annoying over and over. For a reasonable usage of Vive Pro 2, an expensive PC with currently hard-to-get graphics hardware is necessary (note: Displayport 1.4 is mandatory for full resolution!). The entire Vive Pro 2 set costs almost $1,500 without a PC. The headset alone still costs over $800.

In my opinion, Vive Pro 2 is absolutely not for beginners and VR casuals. The additional image sharpness compared to an Oculus Quest 2 with a Link cable is definitely not worth an extra thousand dollars for someone who just wants to game quickly, comfortably, and with a good image. That leaves the VR enthusiasts who always want the best of the best in the PCVR niche. They’ll be well-served with the high resolution and extended field of view, right?

They won’t. Those who pay meticulous attention to pixel illumination, take software measurements for the display, strive to scratch the 120-degree FOV at all cost with uncomfortably thin face pads, and make a-thousand-and-one settings in the Vive console and SteamVR to squeeze out the last bit of (imaginary?) image sharpness will find the Vive Pro 2’s headlight glare and blurring unacceptable.

The bottom line is that HTC delivers an inconsistent VR headset with a flawed lens design. Strictly speaking, it is just a Vive Pro with a different display and lenses. It is not a true successor headset. If I look at the price tag, the hardware requirements, and the installation effort, HTC Vive Pro 2 is the VR headset with the biggest discrepancy between price (including additional costs and other expenses) and actual performance so far.

HTC Vive Pro 2 is suitable for you if you …