As expected, Nvidia’s CEO Jensen Huang introduced new graphics cards from the Geforce RTX-40 series in his video keynote on September 20. Based on the Ada-Lovelace architecture, the cards make use of AI-assisted DLSS-3 rendering. The third RTX generation supposedly delivers up to four times faster results than the Ampere architecture.

According to the manufacturer, the streaming multiprocessors perform more than double the previous generation. An RTX 4090 works with 76 billion transistors and 16,384 CUDA cores, its shader performance is up to 83 teraflops (RTX 3090 Ti: 40 teraflops). Fourth-generation Tensor cores enable a considerable performance leap. They deliver up to 1.32 Tensor petaflops, which is five times as much as the previous generation with FP8 acceleration.

High-speed GDDR6X memory from Micron also comes installed in all models. According to Nvidia, the RTX 4090 consistently delivers over 100 frames per second in games in 4K resolution.

Especially VR headsets with high resolutions benefit from faster memory. Not to mention the general performance increase, as long as it is confirmed in independent benchmarks. The Varjo Aero (review), for example, with its 2880 x 2720 pixels, quickly reached its performance limits with current graphics cards. Pimax models like the upcoming Pimax Reality 12K QLED (5,620 pixels × 2,720 pixels, 200 Hz) should also “coast” better.

Nvidia also touted third-generation RT cores with up to 191 teraflops for more effective ray tracing. The RT cores supposedly work 2.8 times as effectively as in the previous generation. However, the technology is still the exception in VR games.

Some titles already take advantage of dedicated ray tracing cores on current RTX cards. These feature interactions and rendering in real-time while maintaining the VR-typical high frame rates. The mechanics simulator Wrench VR, for example, uses both the latest DLSS and ray tracing for high-quality reflections and shadows.

In Nvidia’s app Omniverse XR, you can already explore digital worlds that make use of ray tracing with the VR headset. There, it also creates soft shadows and realistic reflections. Read more about the Omniverse Cloud, newly announced hardware and new features here.

The newly announced DLSS 3, on the other hand, is designed to take AI rendering to the next level. The new iteration calculates complete frames without burdening the actual graphics pipeline. Up to seven-eighths of the displayed pixels can thus be reconstructed with AI. This can increase the frame rate fourfold compared to an image without DLSS 3.

The principle is similar to reprojection techniques in the VR field. Application Spacewarp, for example, also calculates intermediate images achieving up to 70 percent more performance.

Since DLSS-3 uses “Optical Multi Frame Generation” via a neural network to decouple the rendering of new images from the game engine, the technology can also bypass CPU limitations. Tests will have to show how the technology performs in VR.

Nvidia’s relative performance data for the racing game F1 22 (review), which is also playable in VR, is even more than two and a half times higher with DLSS 3 (see screenshot for test system). However, Nvidia refers to the game on a 4K monitor (3840 x 2160 pixels).

Especially the demanding scenes in the pit lane, which showed problems in the test with an RTX 2080 Ti, could run more smoothly in the racing game with possible DLSS-3 use. They already slowed down the game on a Valve Index (1,440 × 1,600 pixels per eye) and caused unpleasant juddering. Generally, it should be easier to fire pleasantly smooth 144 hertz on Valve’s headset. Supersampling would also make sense considering the sharp backdrop. Here are some other advertised specifications of the RTX-40 series, which Nvidia says bring the following benefits:

The Geforce RTX 4080 and 4090 will be available in various manufacturer variants, from partners like Asus, Colorful, Gainward, Galaxy, Gigabyte, Innovision 3D, MSI, Palit, PNY, and Zotac. A reference design from Nvidia called “Founders Editions” is also planned again, but only for the RTX 4090 and RTX 4080 (16 GB) models. Click here for the availability notification on the official website.

AMD counters in November, Nvidia could stumble over pricing

The competition is already in the starting blocks. Shortly before Nvidia’s presentation, AMD announced November 3 as the launch date for the new cards with RNDA-3 architecture on Twitter. We should not expect a gift for gamers, AMD will follow Nvidia’s pricing.

Join us on November 3rd as we launch RDNA 3 to the world! More details to come soon! #RDNA3 #AMD pic.twitter.com/oftq1Fjrgt

At the same time, the prices for the 3000 series slowly approach realistic pricing again. The promise of double or quadruple frame rates of the 4000 series refers to cases where DLSS 3 and ray tracing can be used when looking closely at the few graphs published by Nvidia. For games that do not support DLSS and ray tracing – i.e. the majority of current VR games – the advantage is much smaller. 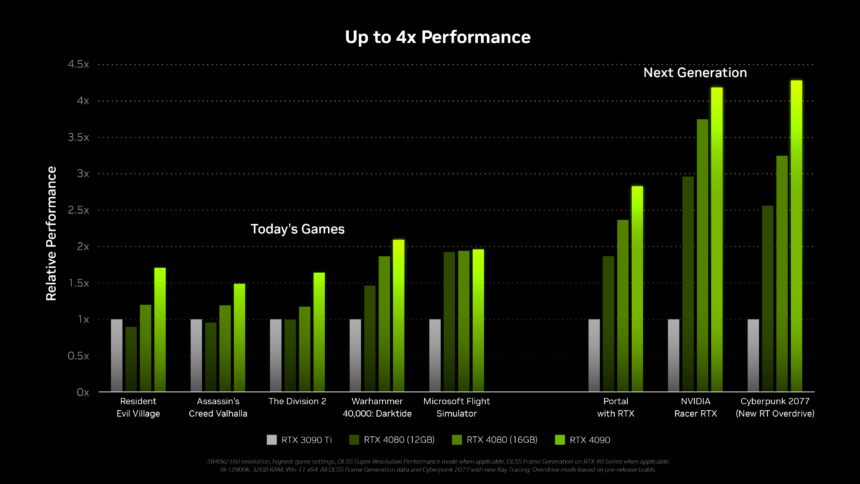 In titles like Resident Evil Village or Assassin’s Creed Valhalla, the RTX 4090 offers about 50 to 70 percent performance gain. | Image: Nvidia

The RTX 3090 Ti could drop below $1,000 in the upcoming months, and will then cost about half of the top model of the new generation. Those who want DLSS 3, faster ray tracing, and probably about 30 to 60 percent more performance might be willing to pay the extra price. Everyone else should wait for cheaper models, buy old models cheaply – or hope for AMD.