3D professionals in particular have been able to collaborate on Nvidia’s Omniverse cloud platform for some time. Companies can use digital twins to create authentic simulations of individual machines or the entire plant site.

The USD format (Universal Scene Description) is the basis for this: It summarizes geometry, animations, cameras as well as the appearance of materials. In January, Omniverse came out of beta and is available free of charge for private users.

In Nvidia’s new app Omniverse XR, you explore these digital worlds with your VR headset. You can move around virtually using the joystick or teleport.

An eye-catcher is the use of the complex light rendering method ray tracing, which adds soft shadows and realistic reflections, among other things. Omniverse XR supports multiple headsets at the same time.

VR ray tracing has high hardware requirements, though: Although Nvidia streams the data from the cloud via CloudXR to the GPU with low latency, the graphics card is still put under heavy load. According to Nvidia, at least an RTX 3090 or the professional card Quadro A6000 is required.

Officially, the app only supports the Meta Quest 2 and the HTC Vive Pro as well as their respective controllers so far. Since Nvidia uses SteamVR as an interface, the app could also run with other headsets.

Multi-level render quality settings shift the balance between detail and performance. In exchange for more frames per second, you can limit transparent materials, shadows, or reflections, for example.

Static Foveated Rendering brings further performance benefits by computing only the image in the center of the lens with all details. Nvidia has developed its own variant of the technology for Omniverse XR. 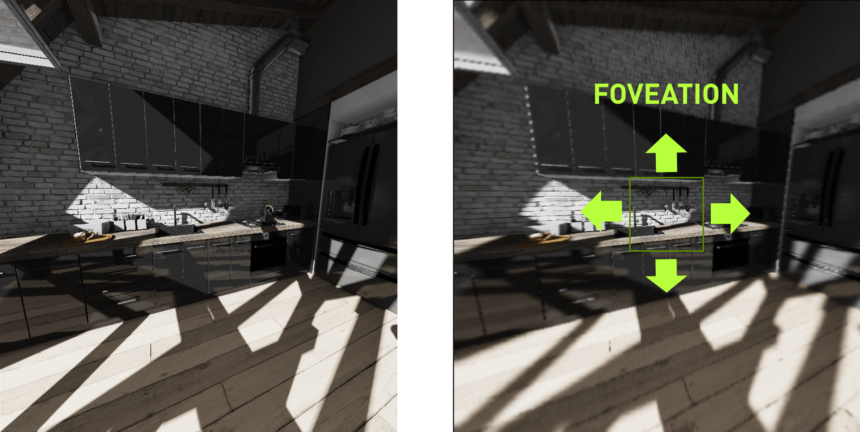 A clear advantage of such VR excursions with ray tracing is the better impression of spatiality. The curves of a prototypical car, for example, look more authentic thanks to realistic reflections.

In addition to the VR mode, Nvidia offers an AR mode that beams the 3D scene to an iPad with iOS 14.5 or higher via the Omniverse Streaming Client. Users can then look around the 3D scene with the tablet in hand or view a 3D object from different perspectives. Nvidia also offers an Android solution for ARCore.