Finally, Formula 1 arrives in virtual reality. In my review of F1 22, I take a closer look at the VR mode for PC VR and Quest 2 with Link.

Once you’ve raced around the track with a VR headset, it’s hard to go back to the monitor afterwards. This rule also applies to Codemasters’ F1 22: The free view with the VR headset conveys the course of the track and my position much more vividly than the monitor. I also estimate distances, curves, and curbs much more intuitively.

The top class of motorsports can be played in virtual reality on the PC for the first time this year. Playstation players will have to do without a PSVR adaptation. Caution is also advised in the Epic Games stores: According to the new publisher EA, the racing game only offers the VR mode on Steam and Origin, but not in Epic’s download store.

Before I delve deeper into the review, here’s a warning: After I installed the Day One patch on my PC, the VR mode could no longer be started. Only a reinstallation and deleting the file “hardware_settings_config_VR” under “Documents / My GamesF1 22” fixed the problem. According to Codemasters, this is a known bug among Nvidia users that is currently being worked on.

After you have fought your way through some bugs and cumbersome menus in F1 22, the racing fun can start. With a reasonably up-to-date gaming PC, you get the most impressive racing game scenery in virtual reality at the moment. Despite the omission of the story, the game offers extensive, motivating career modes around Formula 1 races and team management.

The scope of F1 22 is impressive. Among other things, the very extensive and multi-layered careers as a driver or team owner (Constructors’ Championship) are included, as well as a two-player career. There is also Formula 2 (2021 season), online races with leaderboards and weekly events, solo modes like time trials or a dedicated race weekend.

The implementation of the additional challenges with supercars doesn’t seem quite as successful. Their handling just doesn’t feel as believable as that of the Formula 1 cars. The removal of last year’s passable story mode is also somewhat disappointing.

Instead, the new “F1 Life” section focuses more on showing off online. Visitors can now examine my fleet of cars or the cosmetic items I’ve purchased with the two Season Pass variants (one of which is paid). You can buy additional cosmetic stuff with the in-game currency “Pitcoins”, which is available for real money.

However, such shortcomings quickly fade into the background once it’s time to hit the track with an authentic driving experience – with different force feedback steering wheels if desired. F1 22 is more of a racing game than a simulation. Still, experts (and beginners) will find plenty of options for their preferred level of realism.

F1 22: The most beautiful SteamVR racer?

However, this review is about the VR implementation, which should be nothing new for the developers. Codemasters has already offered VR support to rally enthusiasts several times, for example in Dirt Rally 1 and 2 or Project Cars 3 from the subsidiary Slightly Mad Studios.

As already mentioned, the immersion in virtual reality is great: Thanks to the spatial representation, I estimate distances around me much more naturally and hit the braking points more accurately. Risky overtaking maneuvers that could lead to a collision on the screen I can thread in VR with much more overview and confidence. This especially helps with the AI, which is still sometimes too confident. When it comes to a crash, the (limited) rewind function helps.

The scenery is a real feast for the eyes in virtual reality. Compared to Project Cars 2, the vegetation and lawns in particular look much more spatial and authentic. Buildings, like the ones at the edge of the new Miami International Autodrome, are also more lavishly modeled.

On the downside, cars in the distance are a bit more rough around the edges than in Project Cars 2, though they’re not nearly as washed out as they were in the ill-fated Project Cars 3. It’s best to simply set the edge smoothing to “TAA” to keep the competition on the horizon as sharp as possible. Overall, F1 22 offers a good number of graphical options for better performance.

Even compared to the well-implemented VR mode in Dirt Rally 1 and 2, there is a graphical boost. This is particularly noticeable in the cockpit: I can even see small meshes and bumps on the instruments and clothing, which fits the now increased resolutions of modern VR headsets. 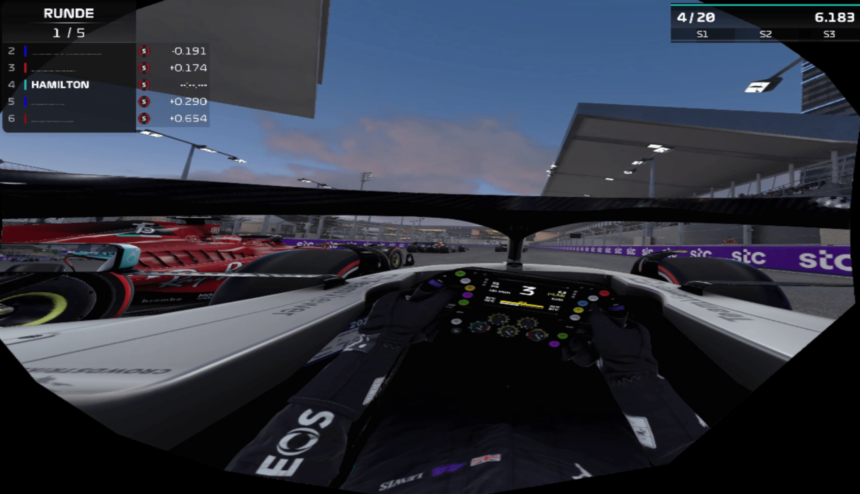 F1 22 PC requirements – it needs a decent amount of performance

My good old Rift S even achieves a smooth result on high to very high settings. With the Valve Index, on the other hand, I have to turn it down to medium. The Quest 2 connected to the PC needs the second-lowest setting (low) due to its higher resolution. However, the result is still relatively decent – despite somewhat coarser shadows and textures, as well as reduced effects.

Unfortunately, menu judder occurred in the box and when pausing the game with all VR headsets, even at lower settings. Codemasters should finally improve this – the problem already appeared in Project Cars 3. However, I was spared from the PC3 calibration issues at the race start in F1 22.

So much for the overall thrilling experience on the track. Before and after the race, however, I had to deal with the hopelessly outdated user interface. A virtual keyboard? Not available here. Support for VR controllers: Not a thing! Not even the mouse, which was invented in 1963, is supported in the menus.

The menus are a disaster

If your PC is also in the corner of the room, you should do some stretching as a precaution. When I signed up for the online service, I had to switch between my gaming surface, the real keyboard, the VR controllers, and the Xbox controller.

Even when I want to peek at the monitor, there are issues. If I pull the VR headset just a little too far from my head, all VR options disappear from the monitor and are replaced by a warning screen. Genius! So I also can’t sit down in front of the PC in peace to set everything up in advance for the VR ride later.

There are also occasional server issues and nasty bugs, like the launch problems described at the beginning of this review. EA and Codemasters are lucky to be targeting such a patient audience with F1 22. After all, VR and racing game fans are much more patient than regular gamers when it comes to wading through menus and configuration files.

It’s unlikely that EA will be able to attract new VR fans this way, certainly not in 2022. The game makes it clear how important Playstation VR 2 could also become for virtual reality on the PC. If Sony’s quality control forces better menus, players of a PC VR version will also benefit. 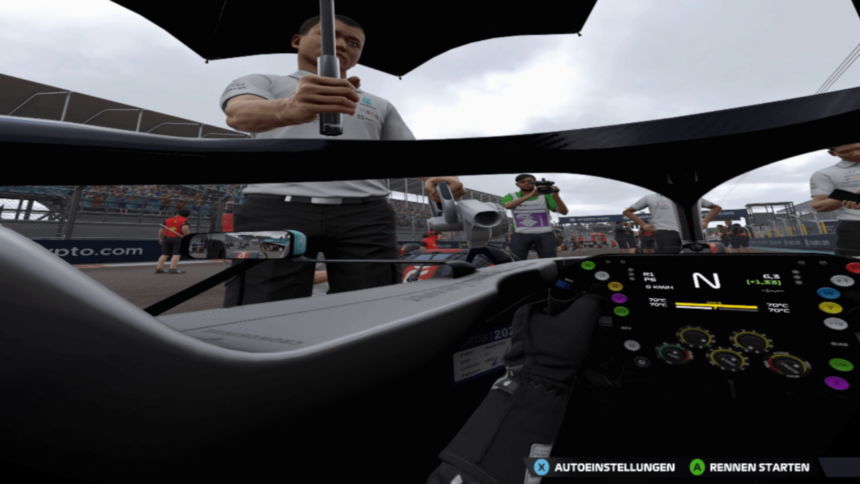 The frame rate is poor before the race start but remains pleasantly smooth on the run with suitable graphics settings. | Image: Electronic Arts

There aren’t many comfort options, but you probably don’t need them anyway

Speaking of options: The comfort can only be adjusted slightly, for example, you can deactivate the blinding Bloom or motion blur. A black vignette at the edge of the image is absent. Other games use such blinders to artificially reduce the field of view during fast movements, as this can be easy on the stomach.

F1 22 nevertheless proves to be very stomach-friendly, even for me as a rather sensitive VR gamer. One reason for this could be that the Formula 1 cars lie on the road like a plank instead of breaking out like in rally drifts. In addition, the cockpit restricts the view in the low seating position. That also conveys a bit of safety.

I am baffled by the old-fashioned user experience in F1 22. Not only do I have to constantly switch between jerky menus, controllers and the real keyboard here. After the day one patch, the VR mode even refused to work completely. Here you can find a workaround in the official forum, which finally solved the problem.

You shouldn’t let that deter you too much, though. In contrast to the chaotic menus, the pure driving fun with smooth performance outweighs the problems on the track. In VR, the races feel wonderfully immersive and look more beautiful than I’ve ever experienced in any other racing game.

The improved driving physics and surround mix also make for a great racing experience in front of the screen. If you have the choice, though, you should definitely race in virtual reality.

This recommendation also applies to newcomers: Despite the lack of comfort options, my stomach has rarely felt as comfortable in a racing game as it does in F1 22.