With DLSS 3, Nvidia promises a performance leap by a factor of four. A new technique that predicts entire frames is supposed to take AI-based rendering to the next level.

With AI-powered rendering like Nvidia’s DLSS, development studios can render more visual detail or higher frame rates with the same processing power. The performance gains from this software optimization can be greater than hardware upgrades.

DLSS 1 and 2 are upscaling-optimized neural networks that can add matching pixels to a scene, upscaling the image without additional computational effort. The networks were trained with low and extremely high resolution (16K) screenshots to learn the difference between resolutions. DLSS 2 is compatible with more games than DLSS 1 thanks to a new training approach.

With DLSS 3, Nvidia says it is introducing a new generation of AI rendering: DLSS 3 calculates entire frames without putting any load on the actual graphics pipeline. DLSS 3 takes the speed and direction of movement of individual pixels into account for an AI-supported interframe calculation.

According to Nvidia, this new neural rendering function (“Optical Multi Frame Generation”) can reconstruct up to seven-eighths of the displayed pixels with AI, which can increase the frame rate by four times compared to an image without DLSS. 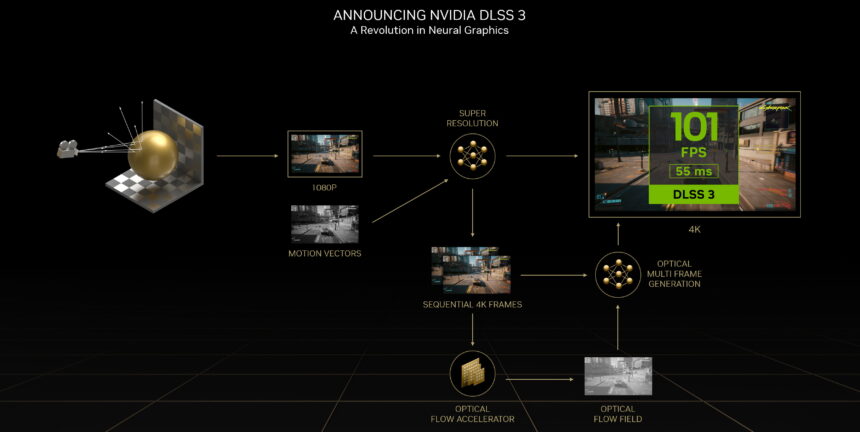 With DLSS 3, even typically CPU-limited games in large worlds or with complex physics are supposed to run on an Ada GPU with a higher frame rate than the CPU could normally calculate.

35 games at launch – starting in October

Graphically particularly demanding games, especially due to the complex ray tracing light calculation, are supposed to benefit especially from DLSS 3. Nvidia promises more than a doubling of the frame rate in Microsoft Flight Simulator with activated ray tracing, for example. 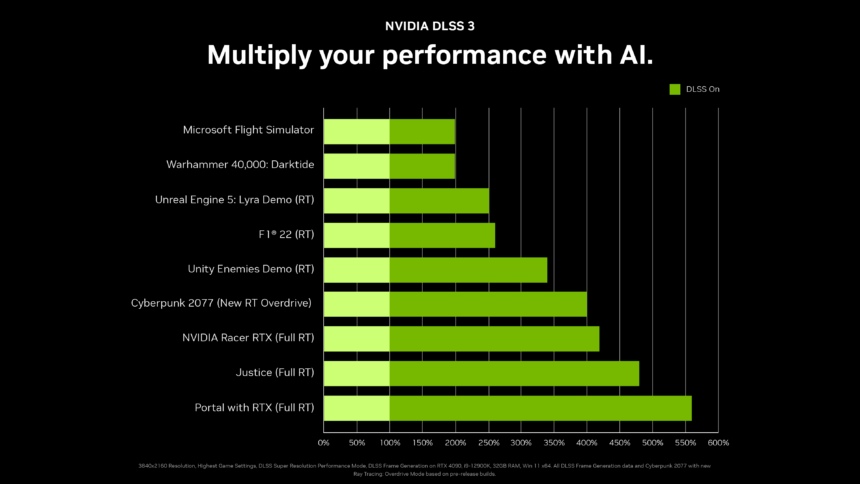 DLSS 3 is supported by more than 35 games (see below) including ray tracing at launch, among them graphically complex titles like Cyberpunk 2077 or the previously mentioned Flight Simulator.

DLSS 3 and compatible games are scheduled to hit the market in October. The new neural rendering feature has only been announced for the new GeForce RTX-40 cards so far.