We Are One is our gaming highlight from Gamescom 2022

Have you ever wanted to clone yourself or travel through time? We Are One offers just that, making it our favorite VR game of Gamescom 2022.

Gamescom 2022 had some interesting VR games to offer. Especially big productions like the graphics powerhouse Hubris or The Walking Dead: Saints & Sinners 2 stood out. But there were also small gems like the charming diorama puzzler PathCraft or the successful Quest 2 implementation of Maskmaker.

One of our last play dates at the game fair took us to the booth of the publisher Fast Travel Games. For over two hours, we were able to fight our way through waves of enemies, experience sword duels and explore space in various VR games. However, the most fun VR experience we had was as a small plant sapling in the virtual forest.

Austrian developer studio Flat Head Games introduced us to a VR game with a special twist: We Are One is a co-op single-player game. That’s right – you play in a team with yourself. This is made possible by a clever time-loop mechanic. 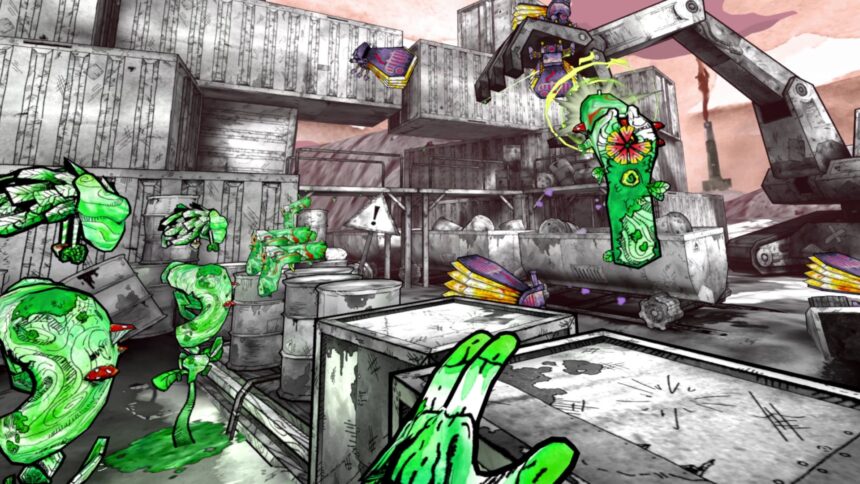 Thanks to my clone friends from different time loops, I can stand up to overpowering enemies and solve puzzles.| Image: Fast Travel Games / Flat Head Studios

As an offspring of Mother Nature, I fight against evil machines and harmful giant beetles. Every action I perform in one of the time loops is exactly reproduced by a clone in the next loop.

So to solve any of the puzzles, I have to plan ahead and remember well what I did in the past, when and how. Once I have “rehearsed” an action with a clone, I can observe it as it acts in the loop. This way I check if what I entered makes sense and how I can use it to plan the next actions for the next clone.

If I’m smart about it, I orchestrate a team of clones to defeat the seemingly overpowering enemy using time jumps and time loops.

We are one: Many friends I must be

I’m standing in a forest under attack by nasty logging robots. Between me and the saw-blade spitting logging machines lies only a tree trunk for cover. Along the trunk are several fixed points where I can sprout my plant clone from the earth.

To beat back the robots, I have to think ahead. Weapons and ammo are unevenly distributed across the five spawn points. In each time loop, I have to make sure that the clone after me is supplied with a shooting club and ammo.

So I start first at the action point in the middle of the trunk. There I find the seeds that serve as ammunition for my plant guns – but the guns are on the left, at the other end of the cover.

I wait for the pause between whirring saw blades and throw the ammo to the spawn points of my future clones where the weapons are lying around. In doing so, I have to estimate when these clones should appear at each point and how much ammo each clone will need.

With all these thoughts and actions, I dodge the saw blades flying around my woody head.

Team performance through space and time

I finish programming the first clone and look at my first iteration from the starting point. Knowing what I just did, I now move outside to a position with the plant cannons. Once there, my first clone begins its actions: He ducks away under the saw blades and then throws the ammunition in my direction.

In stylish Superhot VR fashion, I catch the ammo, load the gun, quickly duck out from under a saw blade, and finish off the robots on my side. Then I throw the gun over to one of the still unused cloning spots.

No sooner have I placed myself at this spot than the groundhog greets me: all previous clone actions continue while I physically crouch behind virtual cover and wait for the gun to be thrown to me. The rest is a formality.

With a little skill and practice, I can literally choreograph my clone army and end up with a stylish puzzle dance. However, the teamwork in the time loop doesn’t always work out smoothly: depending on how stupid I am in the clone programming, I end up without ammunition or a weapon and have to correct my mistake(s).

But be careful! I can only repeat the last loop. If I screw up twice in a row, I have to restart the level and plan better.

Besides the incredibly fun gameplay, We Are One also convinces with a smooth presentation and a charming comic look. We’ll see if the developers can maintain that standard throughout the entire game early next year when We Are One is released for PC VR and Meta Quest 2. If you already want to get an idea, you can find playable demos on SteamVR or Meta’s App Lab.