PathCraft is a cuddly VR game in the style of Lemmings

PathCraft brings diorama-style puzzle fun to virtual reality. How does the mix of Lemmings and Sokoban feel?

In my play session at DevilCow Studios at Gamescom 2022, I got to try out the first four levels of the VR game PathCraft and enter a cute cardboard world full of dangerous traps.

The puzzle adventure in the diorama perspective sends me into a virtual world made of cardboard. A small child in a robot costume marches slowly and unflinchingly from left to right over a course of static blocks. Only a wooden box stops it.

If I remove it and clear the way, the child falls through the gap further back into the abyss. So I grab the box and put it in the free slot of the course so that the cardboard robot child can run safely to the finish. The first Lemmings vibes set in.

With each new course, the complexity increases. The simple closing of a gap is followed by complicated bridge building. Later, I have to disarm traps and think around several corners. The static blocks become sand cubes that crumble after being stepped on once. Other blocks I can fade in and out with the help of a switch.

The new mechanics are introduced gently, level by level, without being too demanding. Finally, I was able to take a look at a late section of the game. The jump to course number 30 shows how complex PathCraft can get.

Suddenly, I have to coordinate three figures at once, rushing in from all sides in a pyramid-shaped structure. Each figure stands in front of a cannon barrel. I see various switches that remove blocks, rotate cannons, and targets that seem unreachable at first glance. So if you want to fight your way through Path Craft, you can expect some crunchy challenges.

You can use hand tracking but the controller is probably better

As you play, you’ll unlock new costumes for the lemming child, experience more and more cardboard environments, and compete on a scoreboard with crate pushers from around the world.

You can play PathCraft on the Meta Quest with hand tracking instead of controllers. Similar to Eternal Starlight, however, the hand controls are a bit too imprecise to act quickly and safely. 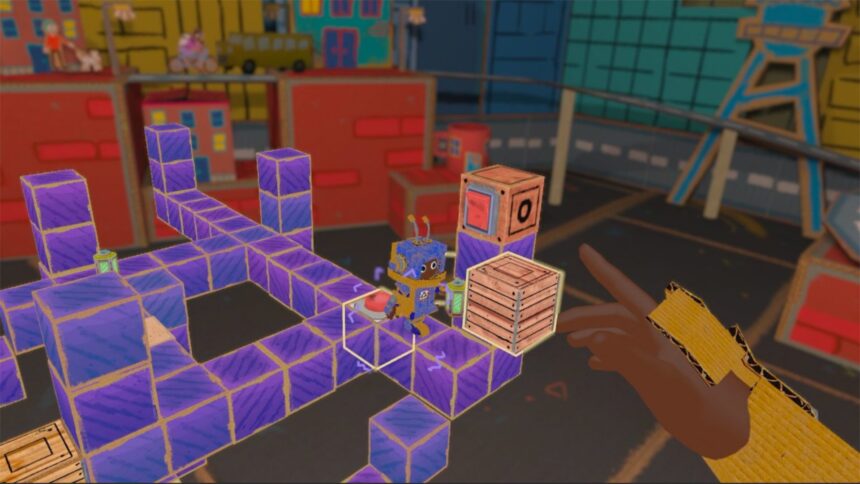 The more courses you successfully complete in PathCraft, the more cute cardboard costumes you get for your character. | Picture: Vertigo Games

Several times I accidentally zoomed in closer to the action instead of quickly maneuvering the crate to the child’s feet. With the controllers, on the other hand, the game plays pleasantly smoothly. I use the grip keys to move around the course and can examine it from all angles for special features.

With the trigger keys, I pick up and place the crates. PathCraft is scheduled for release in early 2023 exclusively for the Meta Quest 2 and offers challenging puzzle fun in a lovingly designed cardboard environment. Those who enjoy puzzling in VR in between should definitely keep an eye on this title.