I played the VR graphics wonder Hubris at Gamescom 2022. Does it have more to offer than beautiful graphics?

Hubris looks damn good. In screenshots and first trailers, the Belgian developer team Cyborn has shown how beautiful PC VR games can be. During Gamescom 2022, I had the opportunity to dive into the shiny sci-fi world and take a look behind the screens and videos.

In my nearly hour-long session at developer studio Cyborn, I tried out Hubris on Meta Quest 2 via Oculus Link. This much in advance: Hubris really is a beautiful VR game. The images released so far don’t promise too much. But it needs more for a well-rounded VR experience.

Founded in 1998, Studio Cyborn specializes in 3D animation. For the work on Hubris, Cyborn used a Vicon Shogun motion capturing system, which is also used in big Hollywood productions – that stands out.

Hubris starts with a short introduction in a spaceship. An obstacle course familiarizes me with the gameplay. After that, a colleague instructs me on my mission and turns on the hologram of a superior.

Here, the high level of detail of the NPCs’ faces and the smoothness of the characters’ movements become apparent for the first time. Fine facial features can be seen, facial expressions and gestures perfectly match the spoken words. It’s a pity that there wasn’t more story content like this to marvel at in the demo.

Swimming in VR can be beautiful and intuitive

After landing, it’s straight into the water and I experience one of the VR game’s parade disciplines right at the start. Never have I swum so realistically in VR. The controls are simple and intuitive: Swimming strokes move me forward, and if I want to go higher or deeper, I adjust my movements accordingly. 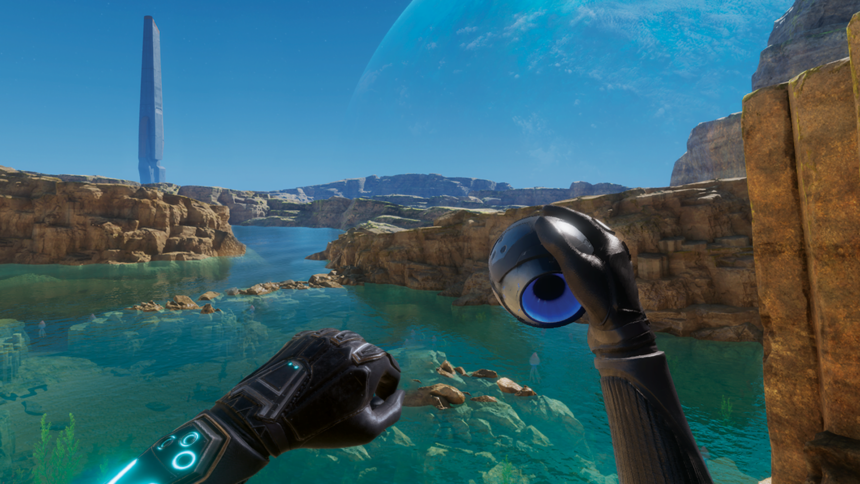 The water animations are impressive and come very close to a real dive. Underwater plants gently sway back and forth, small fish circle me, and beautiful light reflections dance on the water surface.

Later in the dives, I encounter attacking octopuses that I have to take out with a harpoon gun. To get through a gorge in the nearby cave, I stuff their tentacles into a kind of blender. Out comes a rubber rope that I can use to cross the gorge. In this first section, Hubris cleverly combines puzzle and adventure elements.

Jumping and climbing still have room for improvement

Away from the dives, I climb along rock walls, jump over stone platforms, cross a cave system and solve environmental puzzles. Cyborn relies on proven mechanics for the climbing passages. The climbing is so extensive in the demo that I feel like I’m in The Climb 2.

On the rock faces, either makeshift handholds stick out or I hold on to the marked rock edges and ledges. This works flawlessly – only when climbing a platform does Hubris not achieve the precision of The Climb.

When I pull myself up on a rock, I keep slipping off and have to start all over again. When jumping, I also sometimes have trouble finding the right jumping-off point and often land in the water. Practice makes perfect.

Towards the end of my adventure, I have to distract a horde of aggressive alien creatures with nibbles to get a weapon. After that, I can shoot the angry land piranhas, but I don’t experience any real shooter action in the demo.

Cyborn has big plans with Hubris. It’s supposed to mark the beginning of a new sci-fi universe: “This is the start of a space saga that will span platforms, genres, and mediums, and we think Hubris’ VR debut is the perfect way to introduce players to our captivating cosmos,” says CEO and Game Director Ives Agemans.

Currently, I have the impression that besides the great visual presentation, Hubris doesn’t have much new to offer. As is often the case, the impressive aesthetics fade into the background after a short time and the gameplay takes over. Cyborn tries to offer a lot of variety here, but hardly sets its own accents. Instead, the studio falls back on the tried and true and delivers a kind of cross-section through all VR game mechanics of the last few years.

It remains to be seen whether Hubris can convince over the entire playing time, which is supposed to be between six and eight hours. To be truly captivating, Hubris needs to offer much more. Still, I’m excited to see what the story, characters, and action sections have to offer. It probably won’t be the next Half-Life: Alyx, though.

Hubris is supposed to be released for PC-VR this year.