Cyborn has released a free demo of the VR game Hubris, which will make even fast computers sweat.

Graphics gems are few and far between in VR games. In recent months, only a few indie studios delivered detailed worlds for powerful gaming computers, such as in the time-travel adventure Wanderer. The small Belgian developer Cyborn raises hopes for more: A free demo offers a glimpse into the sci-fi VR adventure Hubris.

The trial version of the graphically elaborate episodic game is now available on Steam. Later, conversions for Meta Quest (2) and other platforms such as PlayStation VR are planned.

In the action-adventure from the first-person perspective, you go on a quest to find the mysterious agent “Cyanha”. As a recruit of the powerful Order of Objectivity (OOO), you explore a rugged planet that is being terraformed into a second Earth.

While hopping, diving and climbing through linear levels, you can expect some small path-finding puzzles, you’ll have to operate machines like a crane and craft tools. Later on, revelations about your client are supposed to provide suspense.

You’ll also be able to misuse your enemies to advance in the game: Tentacles of water monsters, for example, become ropes for climbing at marked spots. In addition to pilot Lucia and a floating sphere AI, other partners will join later to help out in the fight against mechs and humanoid enemies.

Cyborn recommends a GeForce RTX 2070 for Hubris, but my first trip through the demo made even an RTX 2080 Ti sweat. Perhaps it was due to the relatively high resolution of the Quest 2, which was connected to the PC via Air-Link. Especially reducing reflections helped against stutter. Cutbacks in dynamic shadows and ambient occlusion also made for a smoother experience.

The planned release of the game in chunks could thus be a sensible decision. This gives the indie team more time to optimize the first episode, which should take around four to five hours to complete.

Even that still needs improvements: In the short demo at least, many things did not run smoothly yet. Sometimes the hand was tracked incorrectly, elsewhere I sank into the rocks, and later the entire PC hung up. How many episodes will follow will likely be closely tied to the success of the first episode.

There is also still a lot of fine-tuning to do in terms of gameplay. The first shootouts against octopuses and alien fleas are still quite easy. A shot here, a dodge there, and the aliens are already tricked. According to the Steam description, more tactics are required as the game progresses.

A tricky jumping passage over floating rocks even brought back long-forgotten memories of Turok: Dinosaur Hunter. Don’t get me wrong, the early N64 title is a classic in shooter history. However, I hated the first-person jumping like the plague.

Elsewhere, though, Hubris makes you want more. Especially the diving with authentic arm movement feels very natural. Plus, you’re rowing around in the air for minutes like you’re “dry swimming.” The looks of confused neighbors are guaranteed when they can observe you through the window. 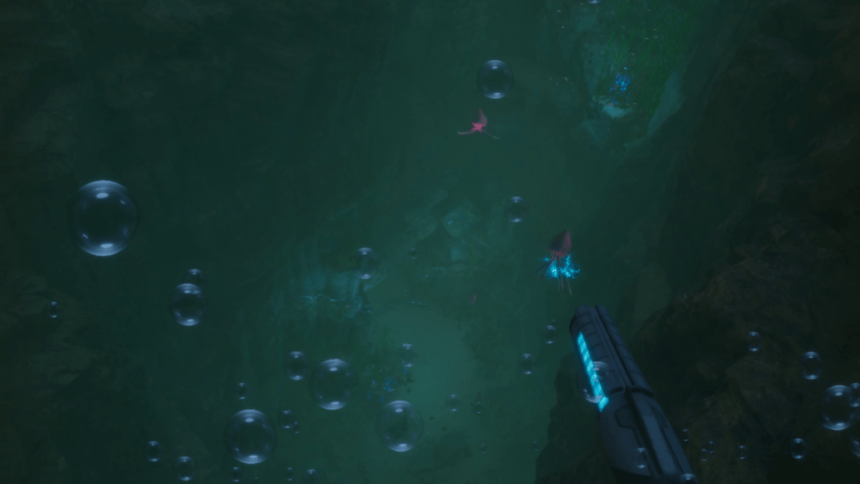 The unimaginative design of the alien fleas and aggressive octopuses causes less of a stir. The detailed backgrounds do much better. Some locations are reminiscent of graphic pearls like Robinson: The Journey by Crytek.

The entire design language here revolves around a futuristic honeycomb shape, which is also reflected in the characteristic basalt columns. When I let my eyes wander over huge terraforming facilities, there’s even a bit of a Halo or Crysis atmosphere.