There are few VR games that 2D and VR fans can play together. Cross-platform titles offer advantages for both players and studios.


Our list of the best cross-platform co-op games in VR includes seven titles. And that’s pretty much all of them. Six of these games were developed for PC and consoles, and most of these titles received a VR mode as an afterthought.

Only Star Trek: Bridge Crew was developed for VR first, and it’s also the only game on the list that’s available on the most successful VR platform at the moment, Meta Quest 2. Of all titles, this one is no longer available for purchase: Ubisoft has stopped selling it, probably because of expiring licenses.

Those who swear by VR, own the Quest 2, and want to continue playing with friends who don’t yet have VR goggles will have to switch to PC and console – or play alone.

Like most VR fans, I have friends who are interested in virtual reality but unwilling to put on VR goggles. Still, I’d love to play a round with them every now and then without having to put my Quest 2 away.

One of my favorites from last year, the tabletop role-playing game Demeo, will soon grant me that wish. On April 7, Demeo: PC Edition will be released in Early Access, a 2D version of the VR game that supports cross-platform multiplayer. This way, I can occasionally play in VR with my friends and maybe convince one or the other to get VR glasses after all.

What’s special about the PC edition is that Demeo has been reworked from the ground up for the 2D platform and features a completely new interface adapted to mouse and keyboard controls.

The PC edition is not a feature, a 2D mode that is added after the fact to sell a few more copies. It’s a standalone game, sold separately, with that in mind. That’s a novelty.

Cross-platform titles close rifts between two gaming camps that shouldn’t exist. And for an independent VR studio like Resolution Games, they can generate valuable revenue.

But games that take a cross-media approach like Demeo face two fundamental risks: For one, they have to be developed to the lowest common denominator of both platforms. his can be to the game’s detriment because – in the worst case – neither the strengths of one medium nor the other are fully exploited.

In the case of the cross-media game Star Wars: Squadrons, for example, this was not a risk, because cockpit games work well to excellently in both media, and in the transition to 2D (hopefully) not too much of the core of the game is lost in Demeo either. But not every game concept works as well in 2D as it does in VR, and vice versa. 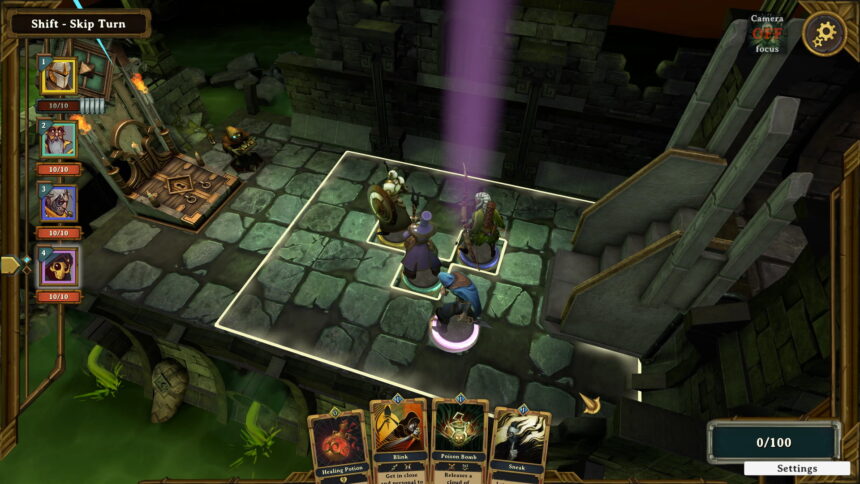 The second fundamental risk in developing cross-platform games should also not be underestimated: the fact that the 2D version usually has to hold its own in a larger, more fiercely competitive market with completely different demands.

In the VR space, Demeo is unique. On Steam, on the other hand, there are 2D alternatives that have a large fan base and have been in development longer. Which is part of the reason why the PC edition is only coming out a year after the VR launch: Resolution Games wanted to provide more content first. At launch, Demeo only offered one campaign, now there are three, and there should be five by the end of the year. It will be exciting to see if Demeo is as well received by PC gamers as it is by VR fans.

Those who want to try out the PC Edition themselves or invite PC friends to a dungeon can do so starting Monday. Resolution Games is offering a free demo of the PC Edition as part of the Steam Next Fest, which takes place from February 21 to 28. The full version will be released on Steam in Early Access on April 7. The price is not yet known.