The fast-paced VR game Outlier sounds like a recipe for motion sickness. But I’m fine – and having fun.

Outlier doesn’t make me want to vomit. That might not sound like much of a quote for a studio to put in an “Accolades trailer”. Especially not six years after the launch of the Rift and Vive, when virtual reality developers have had so much experience and I, as a gamer, have had plenty of time to get my stomach used to VR.

Still, it’s a nice change to not have to rip the VR headset off my head within seconds for once, as happened to me again recently while doing some shaky water sports in Kayak VR: Mirage. And that’s despite the fact that my stomach already contracted preemptively during the first trailer for Outlier: Wild triple jumps, lightning-fast stomping and bizarre tentacle attacks from every conceivable direction didn’t exactly remind us of a walk in the park.

Being a game of the crunchy “roguelite” genre, teleporting mages and surreal bombers crouching in the air scurry around me more and more obtrusively over the course of a playthrough. This makes it all the more important to keep moving and catch entire groups of archaic axe throwers with lightning-fast attacks.

After crashing as a space colonist on a hostile world, I learn with each new run, discovering new weapons in twisted caves and arming myself with permanent upgrades.

One of the coolest abilities is Jedi-style telekinesis. For example, when my two MPs are overheated, I alternatively have to pull numerous boulders towards me to make them float in the air and launch them at the aliens with a throwing motion.

At the same time, I have to dodge, i.e. jump – but how did the developers manage to make the quick jumps behind cover so easy on the stomach? In the futuristic VR action Sairento VR, I finally had to give up after only a few, much easier jumps.

Again, the goal is to trick body perception and especially the cochlea in the inner ear. Insomniac has already discovered in 2019 during the development of Stormland that the organ of balance can be tricked amazingly well. A strong physical jolt also gets the physical reality going.

The fact that in reality it’s not my whole body that’s bouncing up and down, but only one arm, doesn’t matter. So I bounce through the air at the touch of a button and with rhythmic arm swings – and my stomach isn’t bothered in the slightest. If I want, I can even catapult myself sideways into cover. A powerful feeling!

The studio has already used a similar technique in Stride, which was inspired by Mirror’s Edge. In Outlier it is implemented even more intuitively and provides motivating arcade action with combinable extras like explosive fireballs.

However, many other areas of the game still look very unfinished, even for Early Access and even by Joy Way standards. The action still suffers from technical problems. Far too often, I got stuck in the terrain of the procedurally generated levels. Or I fell again and again into the bottomless pit before a restart finally saved me. 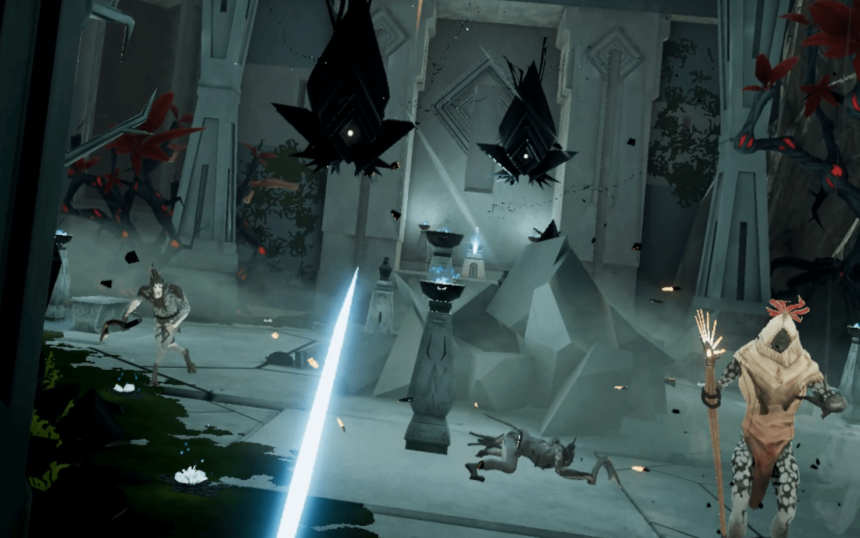 In many places there are pop-ups, performance problems, jerkiness, placeholders, rudimentary menus, and an eternally repeating music loop. Many of the temporary or permanent upgrades are limited to status values so far. The music game Against from the same company already looked much more mature in Early Access.

By the way, Meta has already approved the quest implementation of Outlier for a release in the official quest store. The release date for Meta Quest (2) is still 2022, and the game should get its full release (1.0) on Steam in about six months.

Despite technical quirks and shortcomings in the scope, the fun of biting through, internalizing and combining the mechanics prevails. And I don’t get motion sickness. For my somewhat bitchy stomach, that’s a real plus in such fast-paced VR games!