HTC has launched the Vive Focus 3 standalone VR headset on the B2B market in 2021 alongside the Vive Pro 2. Is it good?

The Vive Pro 2 (review) could not convince me – the price-performance ratio was not great. The standalone VR headset Vive Focus 3 also relies on many features of the Vive Pro 2 – such as the poor lens design. Is the overall package still worth a recommendation for the business sector?

The Vive Focus 3 is a good VR headset for the business sector. Home users can access SteamVR via streaming, and an account login is not absolutely necessary, but the package is too expensive for most consumers.

Comfort and tracking are good to excellent. However, the actual high-resolution image is plagued by glare and god-rays, which makes it very choppy – primarily in high-contrast scenes.

The HTC Vive Focus 3 is suitable for you if you …

The Vive Focus 3 adopts the display and Fresnel lenses of the Vive Pro 2. Both VR headsets have a resolution of 2,448 x 2,448 pixels per eye and offer a wider-than-average field of view maxing out at 120 degrees thanks to the dual-stacked design. The vertical field of view, on the other hand, is truncated and flattened here as well. An incredibly variable IPD control allows the interpupillary distance to be set between 57 and 72 millimeters.

As in the Quest 2 (review), an XR2 processor from Qualcomm works in the standalone headset. The frame rate is 90 Hz by default. 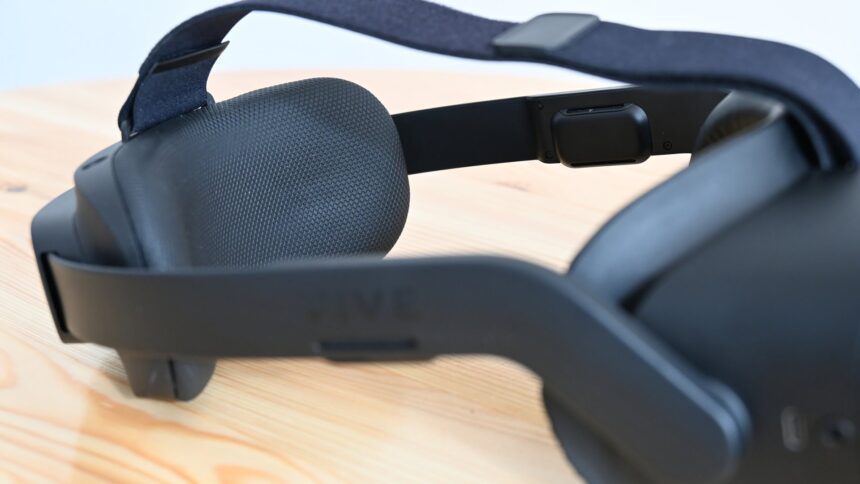 The quite comfortable headband plate at the back of the head can be easily removed. It is magnetic and behind it is the replaceable battery. | Image: MIXED

The replaceable battery is at the back of the head. Similar to the face pad in the front, the magnetically attached padding in the back is removable. The battery itself lasts around two hours with a charging time of around one hour.

Unfortunately, the display-lens combination is just as awful as it was on the Vive Pro 2. While I keep reading reviews praising the extra sharpness of the image, I can only agree with that to an extent. The resolution is high and, in the very narrow sweet spot when completely motionless, the image is very sharp.

But as soon as I move, and especially when the scene in question is high-contrast, I have an incredibly choppy, blurry image. This is due to the fierce glare (the ring of rays around bright objects or writing) and the so-called God Rays, i.e. light rays that refract on the Fresnel lenses and cause bright light circles there, among other things. This is not as noticeable in less contrasty scenarios, where the image sharpness comes more to the fore again. 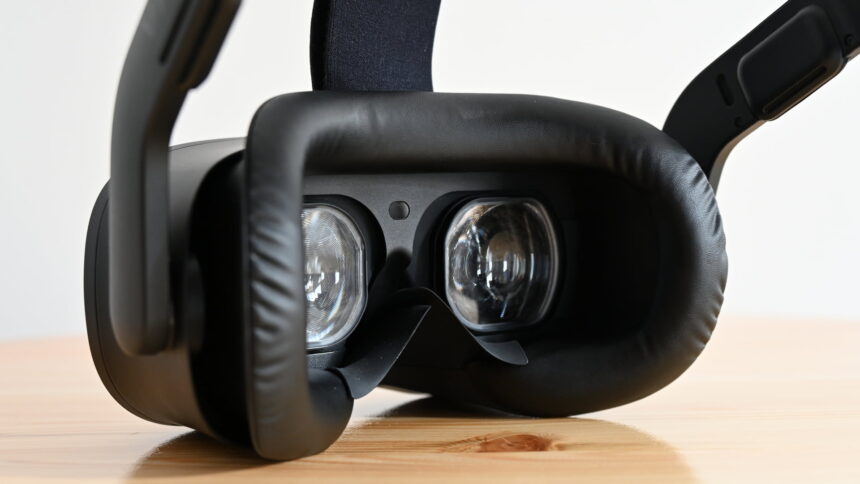 The Fresnel lenses and the displays are the same as on the Viver Pro 2 and they have the same problems with glare and god rays. | Image: MIXED

The larger lateral field of view does not make up for this: The image becomes blurry towards the edges, and it is cut off towards the top due to the new 16:9 format. As with the Vive Pro 2, the image of the Vive Focus 3 – even though it has a higher resolution – is worse than that of the Quest 2, Pico Neo 3 Pro (review) or Pico Neo 3 Link (review) competitors in terms of the overall impression.

On the other hand, HTC has done a great job with the tracking. The Vive Focus 3 is in no way inferior to the Quest 2 – I would even say that it sometimes feels a bit more stable, for example during fast movements on the Expert level in Beat Saber.

However, the tracking does have one drawback: The laser pointer beams that emanate from the virtual controllers rock back and forth during fast movements. I don’t feel like I’m holding a stable lightsaber or operating an accurate laser, although I can still control it accurately most of the time. There remains a slightly spongy feeling during use.

The Vive Focus 3 can also do hand tracking, but not as well as the Quest 2. While scrolling and selecting apps works well, the gesture for opening the menu requires explicit and slow repetitions – and even that does not work well often enough. This can be improved with additional accessories, at additional cost.

The Vive Wrist Tracker sits on the wrist like a slightly-too-large smartwatch. This increases the accuracy of the laser significantly. However, the gadget does not improve the sometimes unclean finger tracking of the cameras. In my opinion, the wrist tracker does not have a significant advantage over the VR controllers – apart from the smaller size. Tracking objects is another potential use of the tracker. 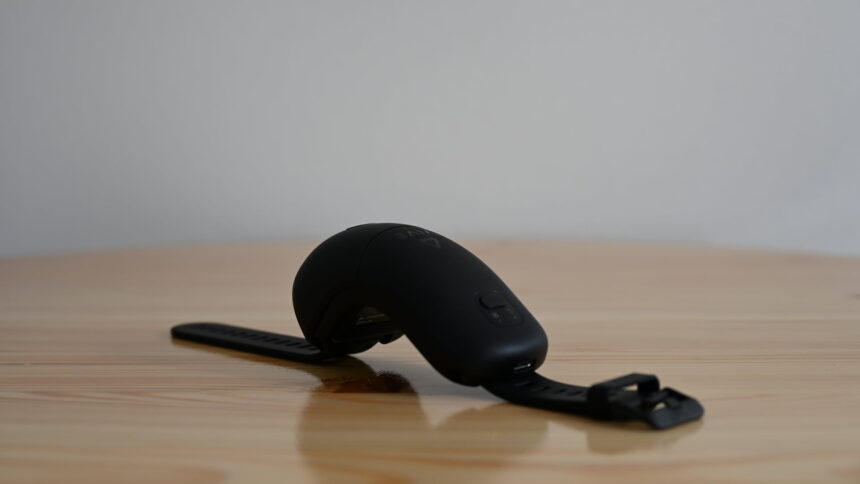 The Vive Wrist-Tracker improves the precision of the laser pointer in VR and I can use it to track objects. | Image: MIXED

The VR controllers of the Vive Focus 3 are rather pragmatic. In any case, they are not ergonomically shaped. The grip is too long and the controllers, therefore, do not sit so well in the hand. However, this is negligible because they do their job absolutely reliably.

According to HTC, users only need a high-quality USB-C cable to connect their own PC. Unfortunately, this did not work in my test. Although I used a recommended cable, the Vive streaming software did not recognize my headset.

Apart from the audio connection, which I could not establish for the life of me, Wi-Fi streaming worked all the better. Clean, high-quality streaming enabled smooth table tennis in Eleven Table Tennis and an almost completely smooth walk through City 17 in Half-Life: Alyx. That positively impressed me, although Air Link still has an edge here as well. In a direct comparison, the picture coming over Wi-Fi was clearer and sharper in the Quest 2.

General use and comfort

The Vive Focus 3 is nice and fast: menus and apps are loaded and ready to use in no time. However, the passthrough mode has a noticeable latency and the playfield setup has to be done over and over again. In this regard, the Focus 3 is a bit forgetful. Quite decent sound comes from the speakers in the head mount. Those who do not like that can connect their preferred headphones via jack. 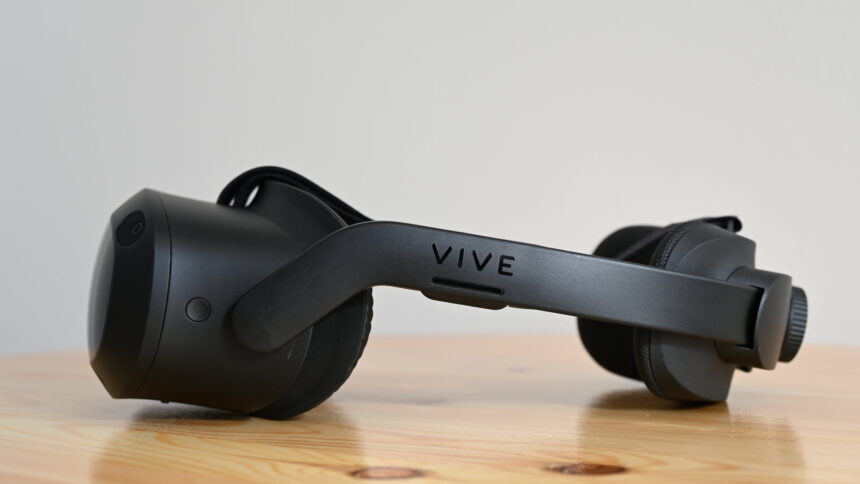 The Vive Focus 3 proved to be surprisingly comfortable in the test. | Image: MIXED

Wearing comfort is surprisingly good. Putting on the Vive Focus 3 is smooth. As a glasses wearer, I fit under the headset without any pushing or pulling, and the plastic face pad is pleasantly soft on the skin. The headset also perfectly blocks out any light. An audible, active fan blows air inside. This cools, but also dries out the eyes a bit faster.

Although the mounting plate at the back of the head is not very well adapted to the ergonomics of standard heads, the headband, which can be adjusted via a dial, also sits very comfortably at the back, thanks to the good padding. Thus, the Vive Focus 3 can be worn for longer periods of time, even if the typical pressure on the face is not absent.

Vive Focus 3 review conclusion: B2B recommendation – but only with a disclaimer.

Unlike the Vive Pro 2, which just doesn’t bring a suitable price-performance ratio in the overall package, the Vive Focus 3 made me feel a bit more gracious towards HTC again. To these points, I can recommend the Vive Focus 3 for enterprise:

Tracking is great, the controllers are reliable, comfort is good, and the VR headset is fast. On top of that, I can use apps entirely without an account login, similar to the Pico Neo 3 Pro. For a good B2B headset, this should be mandatory (yes, I’m looking at you, Meta).

But HTC is inconsistent, hence the disclaimer for the recommendation: it only applies if you ignore the lens display disaster (which works relatively well in less contrasty scenarios). Cable or audio connection bugs can be annoying, and even in B2B, a store shouldn’t greet willing app buyers with the words, “To complete your purchase, please remove your headset and complete your purchase at URL XYZ.”

For private users, the Vive Focus 3 is clearly too expensive, especially since only streaming from SteamVR or Viveport should really be interesting then. However, should HTC further develop its future VR headset on this basis, they could perhaps make a comeback.