Soloist VR: This is how the breathtaking VR climbing film was shot

With VR, you’re up close and personal as Alex Honnold scales unsecured vertical cliffs. How were these impressive scenes shot?


The Soloist VR is a one-hour VR documentary for Meta Quest 2, in which we accompany the Californian on insane climbing routes.

If you’re not familiar with Alex Honnold, the 36-year-old was the first to climb the 2.3-kilometer-high El Capitan in Yosemite National Park unsecured. The documentary Free Solo (2018) captured this outstanding feat and won an Oscar for it.

Shot in Europe and the USA

After the successful VR film Everest VR: Journey to the Top of the World (2020), filmmaker, VR enthusiast and mountaineer John Griffith turned to a new, even more ambitious project.

The Soloist VR was shot in the summer of 2021 with a small crew of experienced climbers in several locations. Honnold mastered the first route in the Dolomites in Italy, where he climbed the Yellow Wall of the so-called Three Peaks. Then the trip went to Chamonix, France, where it went up the Aiguille du Dru. Mont Maudit (“Cursed Mountain”) formed the final leg of the European climbing adventure.

The scenes at the beginning of the film showing Honnold in Red Rocks and Yosemite National Park were shot at the very end.

Above the abyss with music in your ears

The six-person crew included alpinist Nicolas Hojac, mountain guides Corrado Pesce and Tomás Mueller, film crew Renan Oztürk and Jon Griffith, and Alex Honnold himself. Hojac is an excellent climber himself and can be seen in many scenes of the VR film as Honnold’s climbing partner.

Honnold was climbing the European crags for the first time, which required a lot of preparation. In the VR film, Honnold is seen climbing the Yellow Wall belayed with Hajoc, memorizing every move and hold. It was not until the next day that Honnold climbed the rock without safety equipment.

Incredible but true: Honnold listens to music while he climbs. He says it gives him a better sense of time.

The film was shot from top to bottom, not bottom to top. Griffith rappelled down shot by shot, installing the 5.5-kilogram spherical VR camera perpendicular to the wall, while Honnold waited for the green light a little further down on a ledge.

Proud to announce the release of The Soloist VR, a virtual reality film featuring some exciting free solos that I climbed over the last year. It’s been a complicated project with @JonGriffithPhot doing the VR filming and @renan_ozturk shooting a behind the scenes film… (1 of 5) pic.twitter.com/8KBrG2uco5

Griffith developed and refined the rigging system over the past year and a half. It takes about ten minutes to set up. It is particularly important that the camera is absolutely stable. If the wind moves it even a little bit, it would ruin the shot.

Since the VR camera records a 360-degree all-around view, Griffith had to pull himself back up the rock each time to disappear from the camera’s field of view. One can imagine how elaborate that must have been!

Despite many mishaps – the team goes on

What you don’t see in the VR film are the numerous complications. Mountain guide Tomás Mueller injured himself early on and had to drop out for the rest of the project, and shortly before the Chamonix shoot, the 15,000-euro VR camera stopped working.

Since the crew was already high in the mountains and returning to the village would have taken a lot of time and energy, a helicopter transported Griffith’s replacement camera to the 3,500-meter rest area. 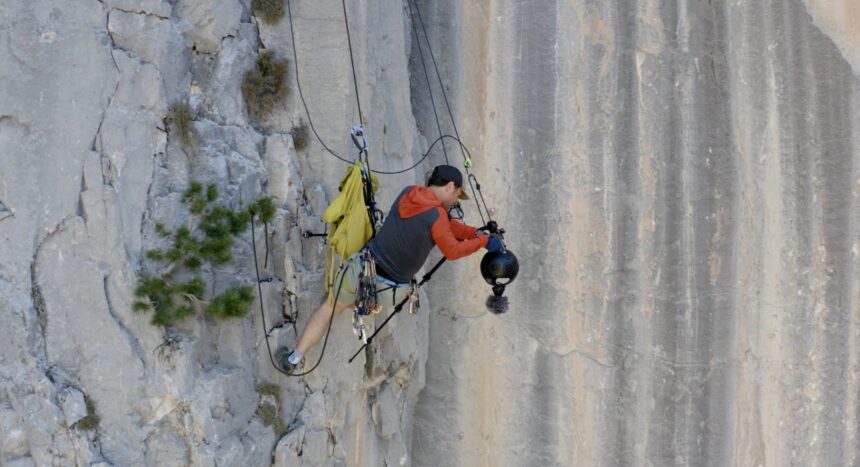 The weather often didn’t play along either: The crew sometimes had to wait for days until conditions improved. During the forced breaks, the climbers spontaneously set off on smaller climbs to keep morale high.

The shoot on the Aiguille du Dru was extremely complex and lengthy, so the entire crew was caught by dusk and had to rappel down as quickly as possible. In the process, an accident occurred, which fortunately ended well.

Want to learn more about this unique shoot? Then check out the highly enjoyable one-hour Making Of The Soloist VR. You can find The Soloist VR for free on Oculus TV.