Quest 2 is most popular developer platform, but Sony is catching up

GDC presents the results of its annual developer survey. What are the trends in the VR industry?


The Game Developers Conference is the world’s largest conference for game developers. Each year, the GDC conducts a survey to track industry trends.

For the tenth survey, more than 2,700 developers were surveyed in 2021. The GDC emphasizes that the survey was conducted before Facebook was renamed Meta in October 2021.

Interest in virtual reality on the part of developers dropped from 27 to 24 percent in 2021. In 2020, VR goggles were still the 5th most interesting development platform – ahead of iOS and Android.

The PC and consoles remain the most intriguing development platforms, ahead of the smartphone and VR headsets. | Image: GDC

As in 2020, there is a large gap between interest in virtual reality and actual development activity: Only about 10 percent of the developers surveyed are currently working on a VR game or plan to tackle a VR project next. Five years after the market launch of the first commercial VR glasses, VR gaming is still a niche.

The question is whether and how much Meta Quest 2 and Playstation VR 2 can ignite developer interest in the coming years.

The future belongs to Meta Quest 2 and PSVR 2

The most exciting VR target platform for developers is Meta Quest (2) with 41 percent, followed by Playstation VR 2 with 25 percent. In 2020, the Quest platform still had a value of 52 percent (2020), which is also because the PSVR 2 had not even been announced yet. 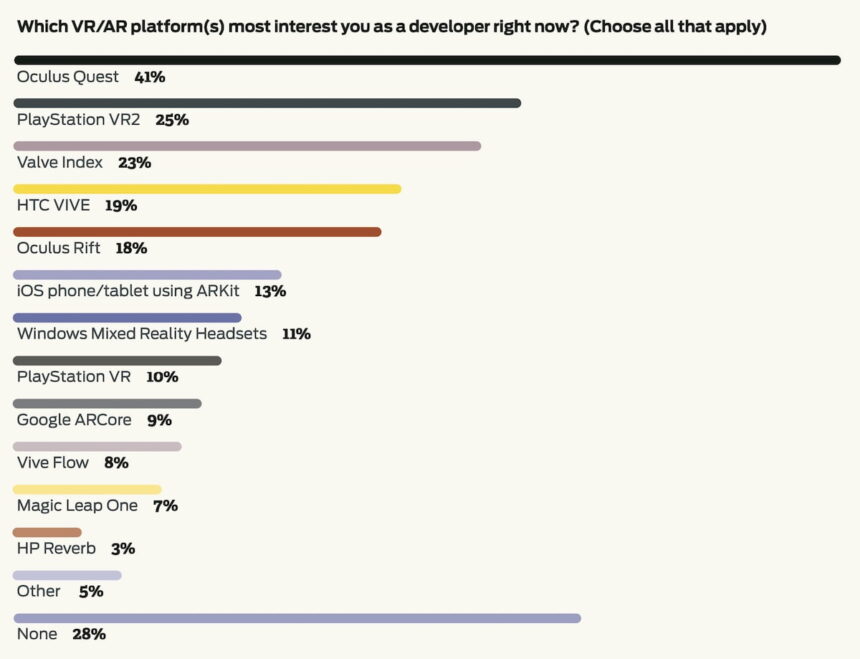 After the announcement of Playstation VR 2, the VR headset rises to second place in the most interesting VR platforms. | Image: GDC

A discrepancy between interest and development activity is also emerging in the more narrowly defined VR developer circle. For example, 27 percent of VR developers are currently working on content for Meta Quest (2), while 56 percent are not developing for any VR platform at all. All VR developers who stated that they had worked on VR and AR games in the past were surveyed. 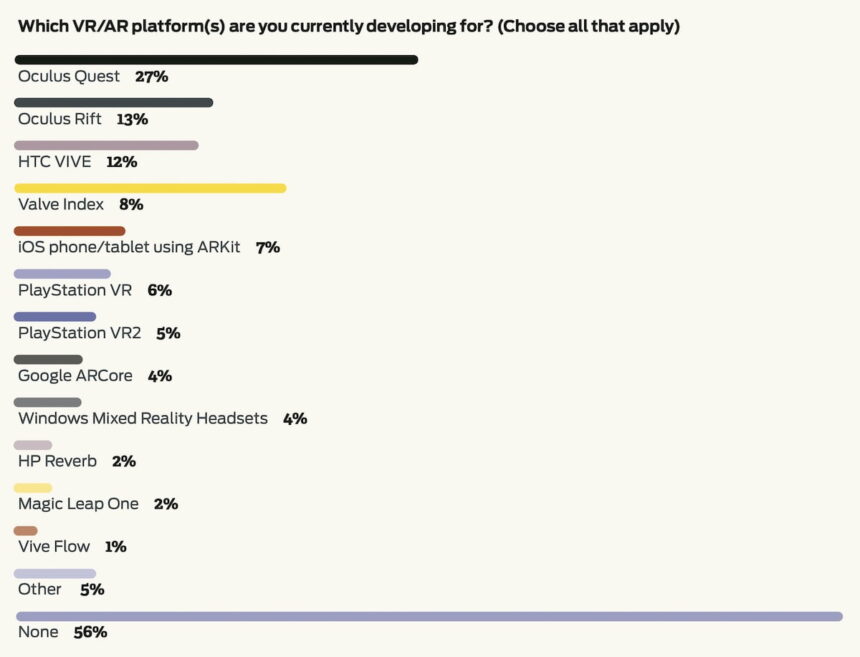 Playstation VR 2 comes in at just five percent, which probably has to do with the fact that most studios haven’t even received a developer kit yet. Next year, the results should be different.

You can download the GDC survey for free by providing an email address.

Read more about the VR market: