Christmas sales were encouraging for Quest 2, with the VR glasses making a bigger splash on Steam than they have in a long time.


Valve’s monthly hardware and software survey records all VR glasses that were connected to PCs with Steam installed at least once in the month and whose users participate in the survey. Among other things, the statistics show the percentage of SteamVR users in the total Steam user base.

Since Steam had an average of 120 million monthly active users 2020, the 1.93 percent SteamVR userbase should roughly equate to 2 million PC VR users.

The following statistics show the market share of VR glasses tracked by Steam in November and December 2021. Devices that have less than one percent market share are not listed.

VR users who are exclusively using Oculus platforms and Viveport and do not have Steam installed or do not participate in the Steam data collection are not captured by the statistics, nor are PSVR players and Oculus Quest 1 & 2 users who only use their VR goggles as a standalone device. SteamVR therefore only makes up a small part of the entire VR market.

The Quest 2 had a good holiday sales season, which is reflected in SteamVR: The VR goggles captured another three 3 percent market share in December 2021. The VR glasses saw similar monthly growth back in December 2020, and the last time was in April 2021. Since then, monthly growth has been up one to 1.5 percent.

However, the full impact of the Christmas sales will be felt in January. For example, Meta Quest 2’s market share grew by 15 percent in January 2021. It will be interesting to see whether the VR glasses can record a similarly large jump this year. 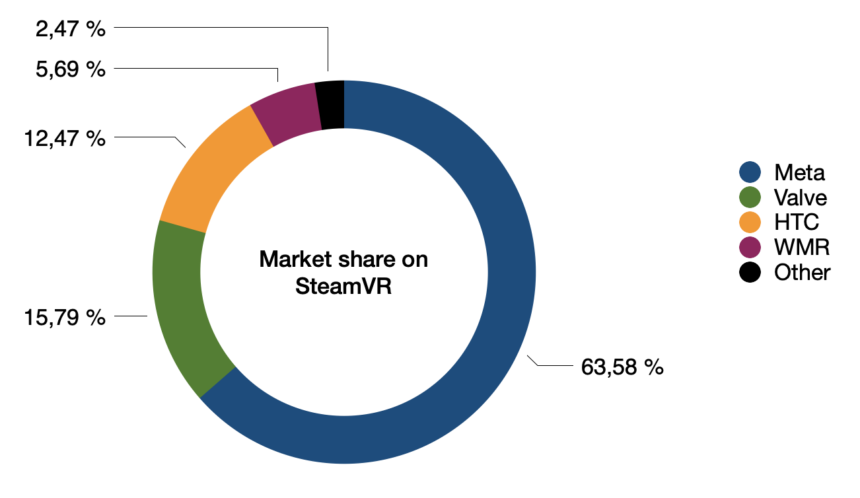 The Quest 2’s growth came at the expense of Valve Index and older Oculus devices. Overall, the SteamVR market share of Quest 2 is now just under 40 percent and Metas overall share is 63 percent.

What’s next for SteamVR?

How often and intensively SteamVR glasses are actually used cannot be seen from the above data. An idea of this is the following statistic, which shows the monthly average of maximum simultaneous SteamVR users.

This number climbed to 18,400 in December 2021 and could reach a new high in January 2022. This would be in line with the trend of the last few years, which describes a linear growth with occasional ups and downs.

Significant developments in the PC VR market should not be expected for the time being. Unless Valve surprises with a new hit, be it hardware or software. Since Half-Life: Alyx, the PC VR market has been very quiet and most studios are only developing for the more profitable Quest ecosystem.