UK studio Coatsink is working on three VR projects, including a cooperative survival game and a launch title for PlayStation VR2.


Coatsink is one of the most traditional VR studios. Back in 2015, the Brits brought the still young medium the puzzle game highlight Esper. The VR game was released for the Oculus Go and Gear VR at the time. Conversions, a sequel and further adventures like Shadow Point and most recently Jurassic World Aftermath followed.

After the studio was bought out by Thunderful in 2020, an annual report from the Swedish publisher recently caused a stir: In the PSVR subreddit, a user came across an entry in the report that mentions a “launch title for PSVR2, PlayStation’s next-generation VR console.”

Developer Coatsink is currently working on such a launch game, the report states, without giving a date or further details. In total, there are three VR titles in Thunderful’s list of “ongoing internal game development projects,” without information on supported platforms.

The “Date” project sounds particularly exciting, which is a title in the “VR Co-op Survival” genre. The release is not scheduled until 2023. So this could be a bigger title, perhaps even the aforementioned launch title for PlayStation VR2. The popularity of other survival and co-op titles like The Walking Dead: Saints & Sinners or After the Fall speak for this theory. 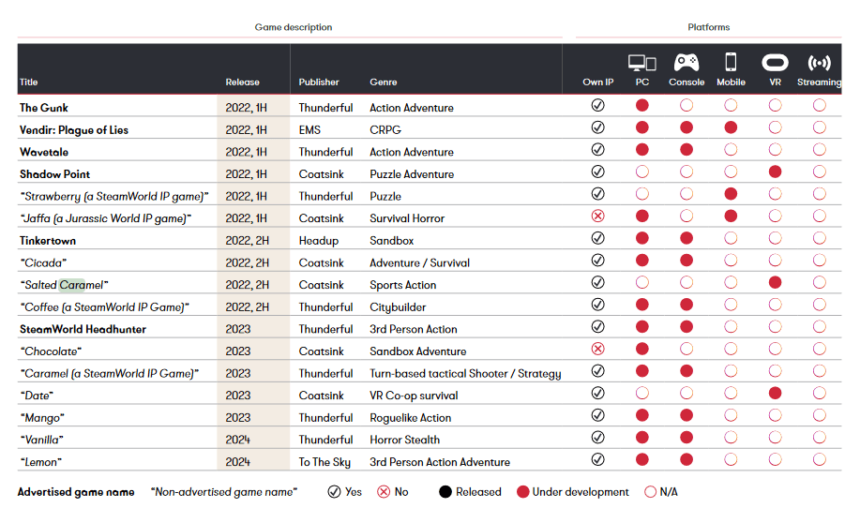 Developer Coatsink can’t complain about a lack of work at the moment. | Image: Thunderful Group

A possible candidate for the PSVR2 launch would also be Coatsink’s “sports action” game with the project name “Salted Caramel”, which is scheduled for the second half of 2022. The chances for this are not bad: After all, uncomplicated sports games have often been released at the launch of new console platforms, such as Sports Scramble for Oculus Quest or Wii Sports.

Add to that a re-release of Coatsink’s oldie Shadow Point, which initially appeared exclusively for Meta Quest (2) and Rift in 2019. With the adventure game already scheduled for release in the first half of 2022, it’s more likely to be a conversion or remaster for PSVR or PC VR.