At GDC 2016, Sony revealed the price and release month of Playstation VR, but at this year’s GDC, the company held back on details about the new Playstation VR 2. At least Sony seems to give developers the opportunity to try out the new VR headset behind closed doors.

For example, Valve’s former VR ambassador Chet Faliszek was enthusiastic, ending his brief description of his first VR experience with Sony’s glasses with, “Sooooo good.” What exactly got Faliszek so excited can only be speculated. But thanks to a GDC presentation by Unity developers, this speculation can now be enriched with new details.

In the talk “Developing next-gen VR games with Unity for Playstation VR 2”, the developers talked about the differences between developing VR games for the PS5 VR headset and current VR headsets like Metas Quest 2. 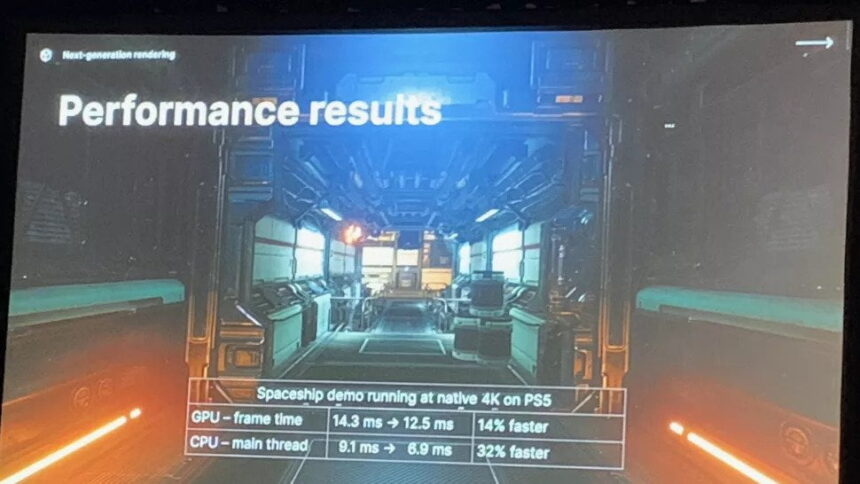 The Unity presentation now provides first details about the performance effects of foveated rendering: In the VR demo Alchemy Lab, which relies on sophisticated graphics with dynamic lighting, the PS5 with eye tracking and foveated rendering needed 14.3 milliseconds instead of 33.2 milliseconds to render an image (frame time).

According to the Unity team, eye tracking also offers new possibilities for game design, as it can measure gaze position and rotation, pupil diameter and blink.

For example, developers could audiovisually enhance elements in the focus of the field of view, influence reactions of non-player characters through eye movements, improve aiming aids or recognize which objects a player wants to pick up. The Playstation VR 2’s eye-tracking also plays a role in more realistic avatars in social VR applications.

According to the developers, the technology can also be used to create heat maps in Unity, which can show, for example, where testers turn their attention during development and whether they are looking at the relevant places in a puzzle.

Playstation VR 2: Asymmetrical multiplayer and 3D haptics in the controllers

Obvious, but now confirmed: The Playstation VR 2 supports asymmetrical multiplayer titles, such as for co-op games where one person plays on the couch with controllers on the TV and one person plays in VR.

Developers can set several in-game cameras in Unity and send one feed to the VR headset and one to the TV. The Playstation VR 2 could thus become more “social” than other VR headsets, which are more often used isolated.

During the presentation, the developers also talked about the Playstation VR 2 controllers: Haptic feedback, finger tracking and the adjustable resistance of the triggers enable more realistic and differentiable feedback to match the gameplay.

As an example, they cite spatial haptics, where, for example, an explosion on the player’s right side triggers amplified feedback in the right VR controller and reduced intensity in the left controller and the glasses themselves.