Meta Quest 2 appeals to different groups of buyers than Playstation VR 2 but could still slow down Sony’s success in an unexpected way.

In 2023, two new, big VR headsets will hit the market at once. Playstation VR 2 in February and Meta Quest 3 likely at the end of the year. (Meta usually unveils new devices at its Connect conference in the fall and launches shortly after.) Apple’s first headset will also reportedly be released later this year, but this is not confirmed.

What is certain is that the next Christmas shopping season will finally see several globally available VR headsets vying for consumers’ favor. Meta Quest 1 & 2 have been able to single-handedly plow the market since 2019. Pico could also be in the mix at the top, should the company decide to market Pico 4 (review) or its potential successor in the US by then.

Meta has now sold beyond ten million Quest headsets, according to various estimates. That’s a big lead over the competition. Since Playstation VR 2 is not back-compatible with Playstation VR and the latter device is a discontinued model, Sony is effectively starting from scratch again in terms of an ecosystem.

The buyer groups of Meta Quest and Playstation VR 2 overlap, but they are not identical. Playstation VR 2 requires a console, costs significantly more than Meta Quest 2, is wired, and can render games with more demanding graphics and gameplay. The buyer group is expected to differ from that of the cheaper and easier-to-use Meta Quest, which is aimed at a broader audience and appeals to casual gamers rather than enthusiasts.

Omdia, a market research firm specializing in technology, published a revenue forecast for headsets and VR content between 2022 and 2027. According to Omdia, Meta will account for 76 percent of all headset sales this year. Once again, the group did not have much competition to fear in 2022, not even from Pico 4.

With more than 10 million VR headsets sold, Meta Quest is by far the largest VR ecosystem. It could stay that way, as standalone VR devices will dominate the market according to Omdia. 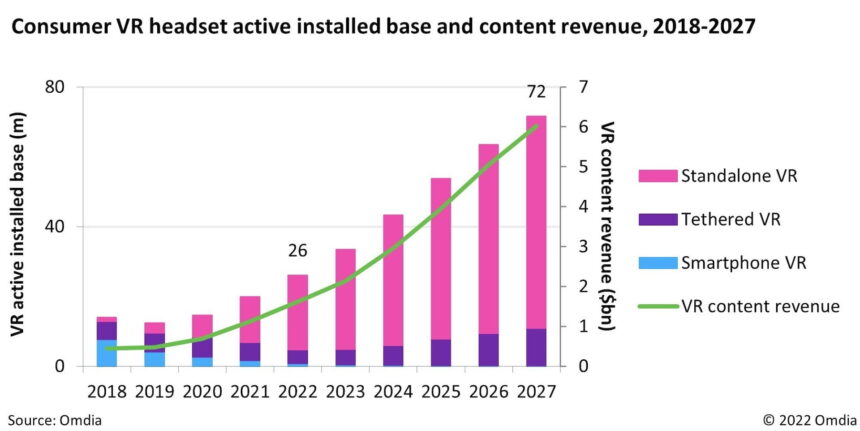 If Omdia is correct, wired VR will remain a niche within a niche. | Image: Omdia

The launch of Playstation VR 2 should nevertheless give the VR market a new boost. Omdia expects Sony selling 3.6 million devices in the first two years (i.e. by February 2025). This figure corresponds to around 7 percent of PS5 owners. According to this forecast, Playstation VR 2 is not likely to be much more successful than the first Playstation VR. This is a realistic estimate considering the high price for the VR accessory.

The implications for Sony’s ecosystem

3.6 million devices sold in two years doesn’t sound like much. And it wouldn’t be, even in the case that Sony keeps expectations low.

The question is what will happen to Sony’s VR ecosystem if Meta Quest has an audience four to five times larger in 2025. Will studios develop and optimize their VR games for a potential audience of 4 million or 20 million? That is, of course, a rhetorical question.

The result could be that Playstation VR 2 will see mostly Quest ports. These fall far short of the PS5’s performance potential, undercutting one of the platform’s unique selling points. This, in turn, is likely to have an impact on sales. Even at launch of the PSVR 2, there are a lot of VR games that were originally developed for Meta Quest 2 and only offer slightly better graphics.

The company could respond to this development by producing high-quality VR games for Playstation VR 2 and increasing the appeal of the ecosystem. The danger of diluting the platform will not be averted until it becomes worthwhile for studios to optimize content for Sony’s VR headset. However, this requires well over four million potential customers.

Omdia highlights how important content is to the VR market. The market researcher predicts that virtual reality remains niche over the next 5 years, compared to smartphones, PCs, and consoles. The main problem, however, is no longer hardware, but software, it says.

“Having surmounted core hardware issues, VR is faced with the much bigger challenge of content. Engagement with existing headsets is patchy due to the limited flow of truly compelling VR experiences, hindering Meta’s goal of a self-sustaining VR ecosystem,” Omdia writes.