This VR helicopter simulator you would like to have at home

A look over the shoulder, a landing on a slope: actions like these are supposed to feel particularly authentic in the Airbus H125 FSTD helicopter simulator. Following an appearance at the European Rotors trade show in Cologne, VRM Switzerland is bringing its new training device for the light utility helicopter to the United States.

The Varjo XR-3 high-resolution VR headset is used for the sharpest possible vision. The visual speed perception in the simulator is said to be exactly the same as the real thing, as the software has been meticulously adapted to the VR headset. The pilot also wears a professional aviation audio headset.

The Airbus H125 is the first VR-based FSTD (Flight Simulation Training Device) to be approved by the U.S. Federal Aviation Administration, the manufacturer says. Realistic sun and shadow effects in the simulation are important for this, explains VRM Switzerland CEO Fabi Riesen. The dynamic hydraulic motion platform makes the finest touches and changes in the ground perceptible.

Another special feature is the specially developed “Precise Pose Tracking” without gloves or objects attached to the body. Instead, there are several sensors on the outer edge of the cabin that map movements of the hands and body in virtual reality. VRM does not explain what technology is used. Similar to the tracking hardware Leap Motion, it could be infrared cameras.

Real replicas of all relevant switches, knobs and controls provide haptic feedback in the cockpit. Force feedback in the cabin reproduces effects like hydraulic system errors. Pilots can operate touchscreens in the VR cockpit by touching the corresponding surfaces in the real replica. However, the actual displays are only visible in the VR headset: Cameras integrated into the XR-3 scan the real positions of the buttons in the cockpit using attached visual codes, so that virtual and real cockpits match exactly.

VRM Switzerland highlights the particularly compact dimensions in the data sheet: at 180 × 170 × 215 centimeters and “only” 580 kilograms, the company says it is a fairly slim cabinet. Click here for the product page of the Airbus H125 FSTD with some more technical details. 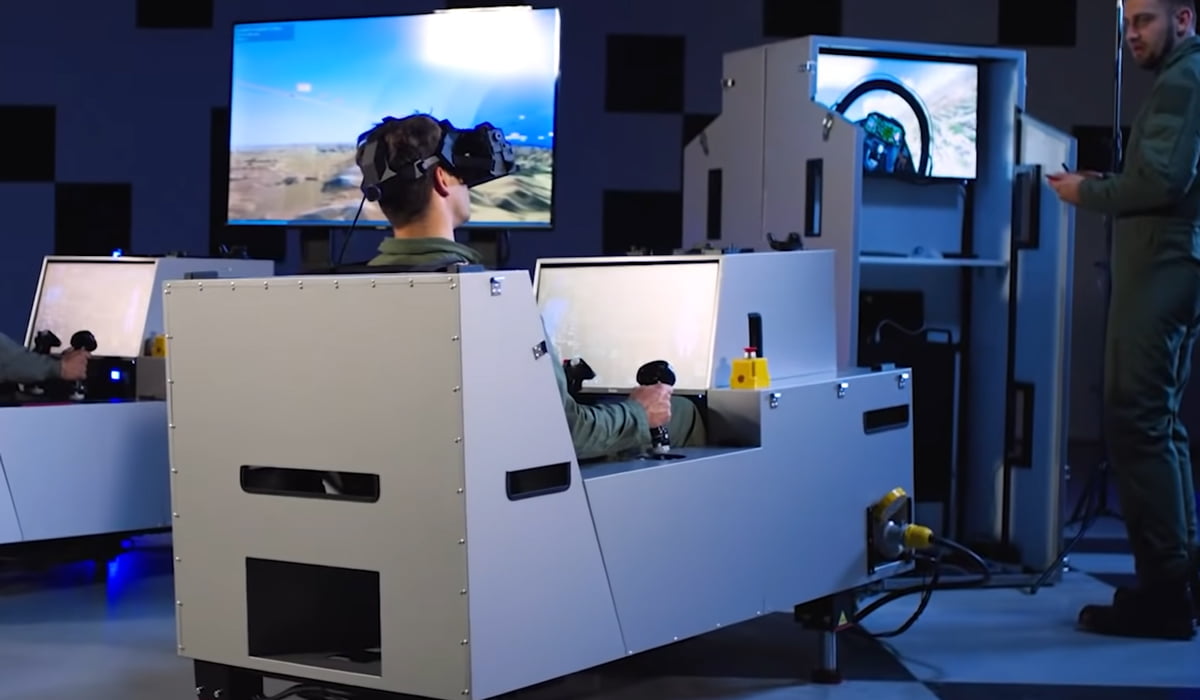 The first customer is a U.S. company that trains flight maneuvers in difficult conditions. At Colorado Highland Helicopters, training will include mountain flying and special operations with an external load attached. In addition, VR training flights are less expensive than real ones.