Take note, Google: Here’s how to use cardboard for VR

French software tinkerer Guillaume Chatelain, also known as “VoxelGuy,” has developed a program that transforms a cardboard box in his hands into a small, moving game world. In the real world, Chatelain merely tilts and shakes a manipulated cardboard box. Under the VR headset, however, a complete little marble run with nasty lava traps appears between his fingers, for example.

Other scenarios show a rotating rabbit hole where the carrots roll to the long-eared one – or even a tranquil little marketplace reminiscent of construction games like Little Cities.

The trick behind it is as simple as it is ingenious: The developer simply attached a touch controller to the surface of the box. This way, all movements of the box are accurately measured and transferred to the dimensions of the cardboard box in the Unity engine. He streams the image of the PC VR program via Wi-Fi (Air Link) to his standalone Meta Quest.

The developer has even recreated his home in virtual reality: so he also sits virtually at his real desk, above which he tilts and turns the cardboard box. This is the mixed reality dream of DIY kings.

He generally has no shortage of ideas: Chatelain has already posted impressions on Reddit of how he transforms the “digital twin” of his apartment into other scenarios. At the push of a button, he finds himself in a spaceship or in a Minecraft-style pixel world.

In another of his mixed reality gaming ideas that combine reality and the virtual world, the controller sticks to the pipe of his vacuum cleaner. This allows him to suck up coins from the floor in the virtual image of the real apartment. The game even has a practical use because he no longer forgets a corner when “collecting” the coins – the gamification of housework. 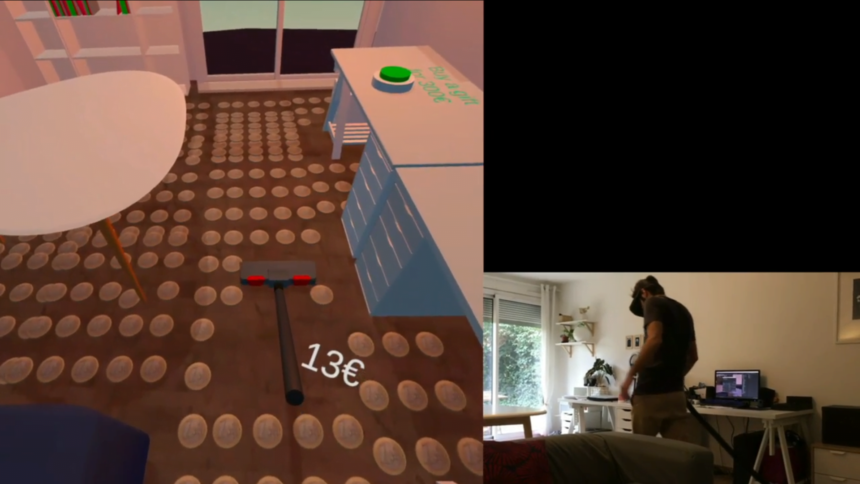 “For me the controller is a tracker”, explains Chatelain, who describes himself as an enthusiast for Unity, Blender and VR. His idea for the magic box in the virtual world came to him in everyday life. He took the measurements, attached the controllers with some wire, and developed a few mini-games that he adapted to the position and rotation.

Despite the simple concept, the feeling was brilliant, says the developer. Even non-gamers understood it immediately when they tried it out: “They simply take the box in front of them and play with it.”

Because of some bugs and too little experience in this field, he has not yet published his experiments, says Chatelain, who works as a web developer for a living.

That could change in the future, after a learning phase or when a prototype is particularly exciting. Chatelain’s other ideas include mini-game collections like Warioware or puzzles with optical illusions, as in the Steam title “Moncage.”

Other mixed reality concepts can already be tried out in the Sidequest store: The development kit 2Sync transforms the home into a tangible VR world, for example in the zombie shooter House Defender (formerly “RoomJam”) created with it.

Those who want to mix the real world with AR elements can also try out the AR demo The World Beyond at Quest 2. Meta released the experience to coincide with the launch of its new SDK, which permanently anchors game objects in the physical world.