The Meta Quest 2 has its limitations when it comes to rendering and performance. Cities: VR has just impressively shown how not to implement games for the standalone VR headset. A few weeks later, competition comes into play: A couple – the studio is called Purple Yonder – develops a city builder for Quest and Quest 2, but this time it’s a native VR game, not a ported version.

My colleague Tomislav liked the VR game in his preview of Little Cities. Can the two developers show the big but failed competition how to do it right?

Little Cities Review in a nutshell

The (not so) small cities offer simple, but appropriate graphics. I can’t find curved streets, but there are clear lines and sparse animations as well as many general environmental details – such as a waterfall, active volcanoes, hot-air balloons, airplanes, paragliders and ships. The traffic is not very dynamic and unevenly distributed, and there are no inhabitants.

The variety of buildings is good genre standard – from service buildings to amusement parks and airfields, everything is there. This allows me to build quite impressive and, above all, consistent cities. 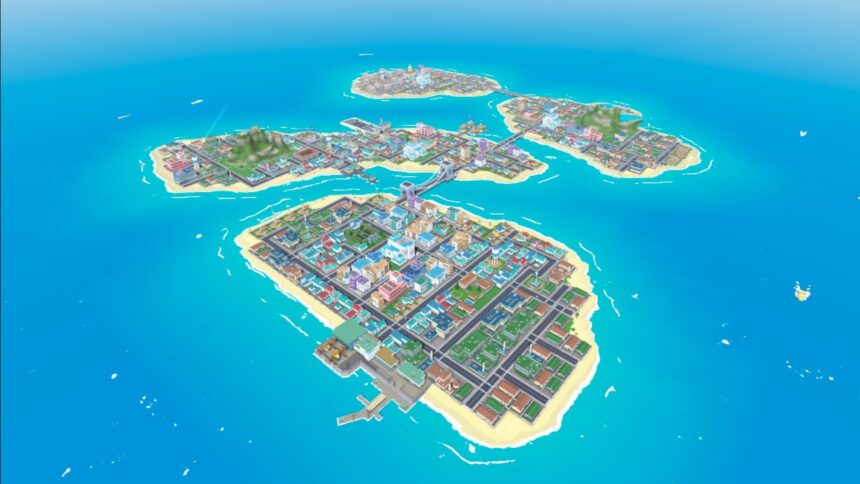 The cities are not quite that small in Little Cities, after all. | Image: Purple Yonder, MIXED

The handling is partly first-class: 3D menus not only show important information at a glance, I can select buildings and streets with quick movements and simply deselect them with a swipe of the left hand. Unfortunately, there is no option to scale the map: Only “Up” and “Down” are available for zooming or more overview, and it does not go down to street level. The old-fashioned motion controls can be done better and more intuitive. After all, the hand tracking update has made controllers obsolete and the controls even better.

Little Cities comes without any micromanagement and is therefore a simple building game in VR, but just through this simplicity achieves a cool flow. The islands fill up quickly, and I hardly have any waiting time. If I do have to wait, it provides a nice overall picture to look at and relax.

Little Cities is suitable for me when …

Little Cities is less suitable for me if …

No steep learning curve – but a few surprises

A tutorial accompanies me through the building process on the first island: Step by step, the VR game explains how I lay roads, provide water and electricity and create the first residential, commercial and industrial areas. Water and energy come from the respective buildings and spread across the streets.

That’s followed by the police, fire department, hospital and schools, all with catchment areas: zoom out a bit, adjust catchment area, build the building – the city service is ready. Construction vehicles build houses in two stages, and there are only simple animations. 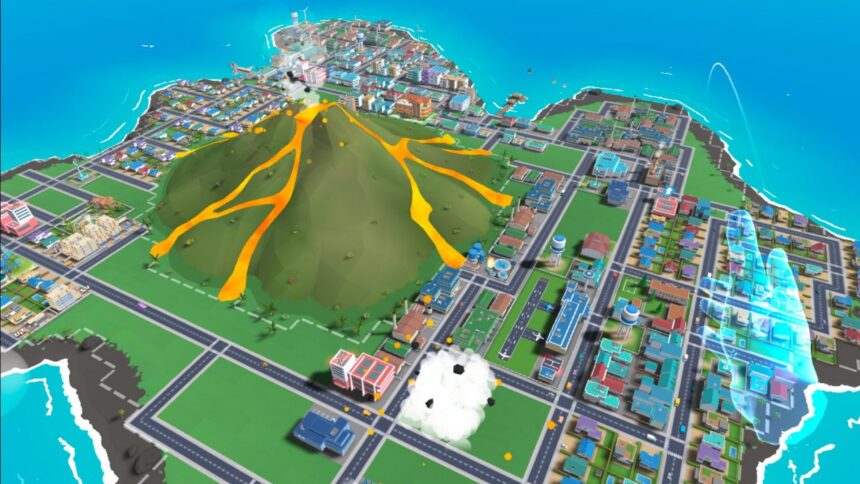 This is how it works with all the buildings I unlock level by level. From level six I can unlock the next region of the tutorial island, at level ten I jump onto the world map and colonize new islands. This is quick and intuitive, but the islands that have already been built on are not simulated further. SimCity veterans will wistfully remember the final attempt by Maxis and Electronic Arts in 2013 to follow up the success of the great SimCity games with a similar concept.

The new and larger islands bring new challenges and buildings: a geothermal power plant, airport, or swimming pool provide more energy, additional approach routes for construction vehicles and more satisfaction for the island’s inhabitants. Suddenly, I hear rumbling and the mountain in the middle of the island starts to spit fire. Great, the volcano is flattening my buildings! Fortunately, this is not getting out of hand – I never actually have money problems, at most I have to wait a bit at the beginning until the cash-in really starts.

First-class VR controls – with one exception

Satisfaction, money, the level of the city and needed zones are displayed in a clear 3D menu when I turn my left hand and look at the virtual smartwatch.

The controls are great: There is a construction menu bubble on the left side of the hand, which I tap with my right index finger. Then I get more bubbles with the different buildings. Tapping on one makes the selected house appear in the bubble above the right wrist and is thus active: I can now place the house or the street via the laser pointer of the right hand.

If I want to delete the selection, I simply select it again or swipe through the bubble of the right hand with my left hand – the selection is gone. After a short time, building is so fast that I get into a real flow – and that is one of, if not the greatest strength of Little Cities. 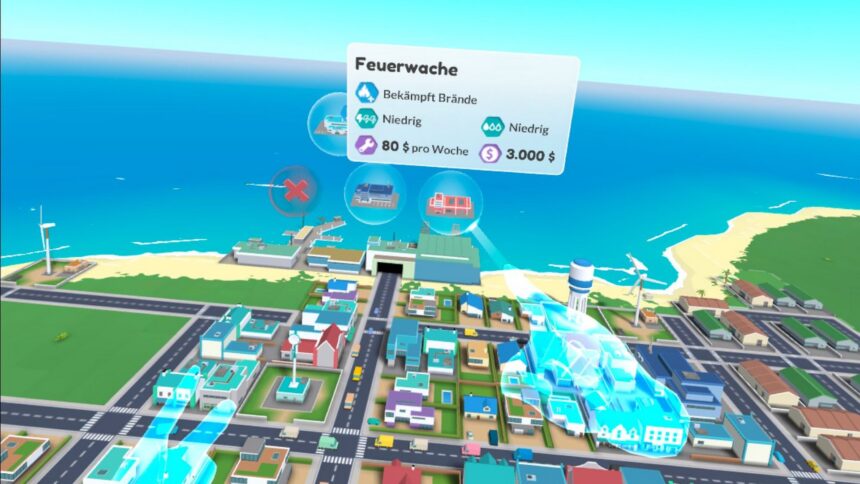 Just tap, and I can put the fire department there. The controls in Little Cities are outstanding. | Image: Purple Yonder, MIXED

Unfortunately, the other motion controls are old-fashioned and – in my opinion – a bit annoying. If I hold down the right grip button, I can point the laser pointer at a spot and pull myself back and forth like with a grappling hook, but only by wrist movements. This is not very intuitive, even if you get used to it. I turn with “Right” and “Left” on the right analog stick, “Up” and “Down” give me a better overview or bring me close to the city, but not to street level.

I don’t understand why developer Purple Yonder didn’t use controls like in Demeo or Townsmen VR (hold down both grip buttons and then rotate, pull, push or zoom the image by moving the hands apart and together). The world can’t be scaled either. Especially the view from the very top of the little city looks quite excellent – if I could get the city closer to me that way, that would be great!

Fortunately, the hand tracking update has been released meanwhile, which brings the above-mentioned controls along for the most part. Hands clenched into fists and turned as with the steering wheel – the image rotates. Fists brought together or apart – there’s the zoom, and I quickly get closer to my city. With one hand, I reach forward and pull myself across the map. This works very well.

With my index finger, I select what I want to build in the menus by tapping on it. Then I point to the location where it should be placed. If I turn my palm upwards, the building orientation changes. Bringing thumb and index finger together (so-called pinching) places the building at the targeted location. You can see how well this works in our video.

If I build at a distance, the targeted position can slip when I pinch and I end up building the house in the wrong place. It is recommended to zoom in closer, then there will be no problem. However, hand tracking requires a little practice and I have to make my movements a bit slower than with the VR controller. If I am too fast, the tracking does not keep up and the requested action is not triggered. If you are generally more interested in relaxing, this won’t be a big deal for you.

Graphically, Little Cities does everything right: The aesthetics are adapted to the platform, a bit sparse and lacking in detail close up, but consistent and quite nice in the overall picture.

From a certain distance, the streets unfortunately become blurry, which ruins the positive overall impression a bit. I accept the fact that the vehicles don’t seem very dynamic and tend to “slide” in rather than park at their respective destinations. 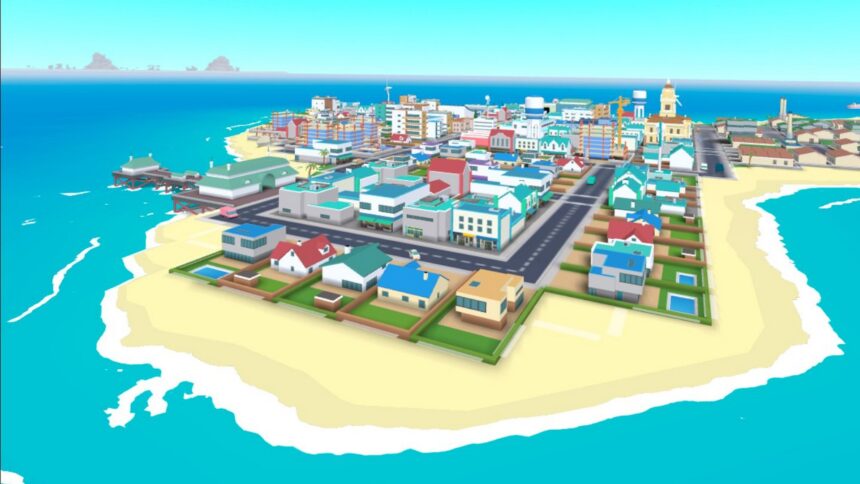 The graphics are simple, but consistent. By the way, in the background, you can see another playable island as an outline. | Image: Purple Yonder, MIXED

By the way, motor vehicles do not stop, but disappear at their destination. There are also no people, which makes the liveliness in the city missing. This only comes back in the overall picture when seagulls, hot-air balloons, para gliders, airplanes, helicopters, and boats fly and drive by.

With the latest update (22.09.2022), attractions have been added to Little Cities. New options are available in the menu to beautify the city: gardens, playgrounds, fountains and much more. I have to unlock most of them first – that’s what the new style system is for. The higher my style rating in the city, the more building options are unlocked.

However, I don’t just randomly place attractions on free building slots: If I combine the playground with a school, for example, there are synergy effects and my style rating increases significantly. That way, I can combine attractions with other buildings in a smart way.

Little Cities comes without micromanagement. I don’t have to adjust balances, lay pipes or power lines. Instead, the system is simple, relying on building spheres of influence and intuitive, mostly top-notch VR controls. Downer here: the movement on the map is outdated and uninspired unless I use hand tracking. That works excellently and makes VR controllers completely obsolete.

On the other hand, the rest of the game shines with an occasionally addictive flow: Building the city is so easy, and the islands fill up so quick and smoothly that only the battery of my Quest 2 forced me to take a first break after a good two hours.

However, at some point everything is built, optimizations hardly make sense and I have already filled various islands with streets and buildings. Then the motivation wears off, and I don’t see much long-term motivation in Little Cities. However, it’s certainly good for a bit of relaxation while quickly building cities and also to show VR newcomers what is already possible with a standalone VR headset and hand tracking.

Developer Purple Yonder has proven with their debut title that they have understood Virtual Reality and the platform, the Quest (2).

You can buy Little Cities here: