In my review of Moss: Book II, I recently talked about gaming moments. These are the moments that make game enthusiasts’ hearts leap for joy – when you get to know and love something new and outstanding and don’t soon forget it.

Townsmen VR is now the second “gaming moment” for me this year. The build-up game didn’t just surprise me – it blew me away and has now tied me up for more than 25 hours on the Quest 2 (with Link).

Why is it so good?

Townsmen VR review in a nutshell

People with a lot of passion have worked on this VR game. The islands on which I build villages are beautiful and always offer fantastic panoramas even after several hours of play.

The little settlers diligently go about their tasks – everything is finely and lovingly animated, a feast for the eyes! Little villagers carry materials from one place to another, knock around scaffolding or veins of ore, smelt iron and gold, stir the cooking pot, shoot rabbits and deer, raise livestock, and beat up invaders.

The Settlers diorama comes to real virtual life in VR and makes me forget about time and surroundings. The controls are intuitive and well-thought-out, there are many buildings and professions, and each campaign map is as varied and exciting as the last. The accompanying story of the 15-level campaign is also excellent and humorously told.

Townsmen VR is a milestone for virtual reality and sets the bar quite high for upcoming building games. It’s a must-have for simulation fans, and I highly recommend it to any other VR fan.

Townsmen VR is suitable for me if …

Townsmen VR is only not suitable for me if …

Settlers meet Black & White: I am a god!

The ship lies deep in the water, and has some list. The mast is broken, and it’s impossible to continue the journey. But then I emerge: Like a young god, I hover over the ship and crew, raise my gauntleted hand and … quickly pick a bit of floating wood out of the water to throw it on board. A few hammer blows later, the mast is up again and the storm-tossed ship picks up speed.

Thus begins my career as a celestial overseer in a medieval island world over multiple English settlers and their leader Sir Clunkalot. He and various other characters tell me what to do as soon as the barge docks at the first island.

With the trigger key, I grab material – from logs to stone blocks to raw eggs – or humans and animals. In this way, I can shorten longer distances or simply place the required resource into the empty hands of settlers.

I can also “feed” buildings directly with the necessary ingredients – the settlers then only have to clump it together. By the way, I can also throw the little citizens, which brings a lot of efficiency into the game for those rushing with a little practice and precision. 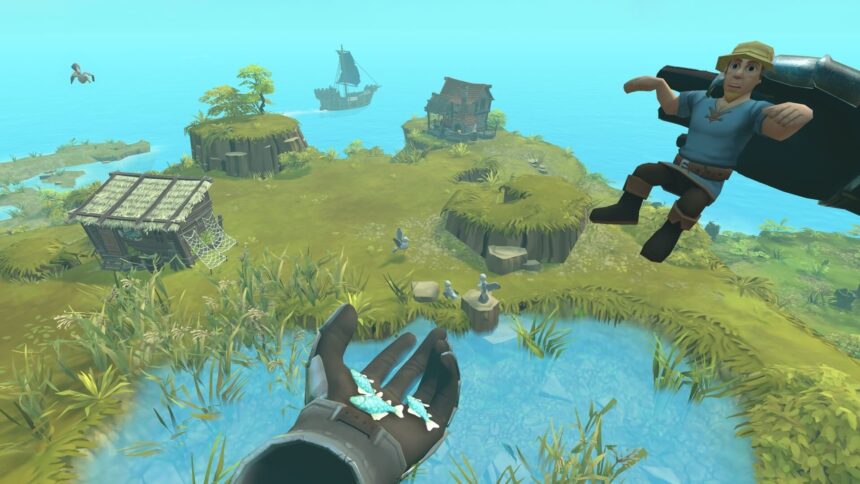 Hmm, what am I going to do with you now? | Image: HandyGames

I use the analog stick to call up menus: Main menu with save function, population overviews, building menus. I start with a well, which I drag from the appropriate construction menu and place on one of the two water holes. Already the little settlers are marching off.

I want to take a closer look: I hold down the Grip button on a VR controller and simply pull the island closer to me, rotating it a bit more for the perfect viewing angle. If I hold down both Grip buttons and bring my hands together or apart, the world scales to miniature or becomes significantly larger.

In the miniature view, I’m now very close and can see the details of well construction, the settler hauling the wooden beam, the colleague working on the scaffolding with a hammer, until a pretty well is standing there. Now the people are thirsty and take a few sips of water.

Distribute and rule … and work along, you lazy god!

Now it is necessary to distribute the work: I set a woodcutter’s hut, grab a settler and move him to the hut. This way the jobs are distributed and I can quickly redistribute them.

The hut is a bit further away from the resource box, the settlers have to walk quite a bit. Without further ado, I take the logs myself and load them into the scaffold. Then I grab a worker and place him directly at the lumberjack’s hut: Time saved, the hut stands. Automatically, the worker becomes a lumberjack and goes to cut down trees. 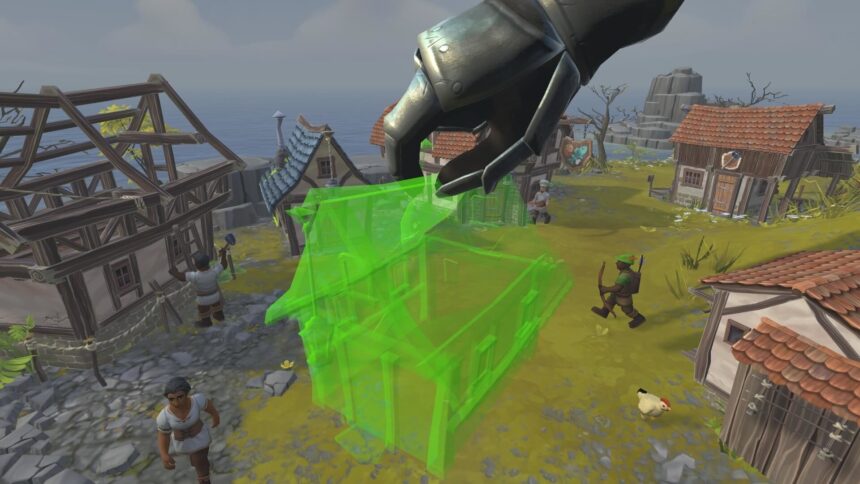 I place buildings where they fit – or where they make particular sense, after all, I want to build efficiently. | Image: HandyGames

I don’t have to figure everything out on my own, if I haven’t just started with a sandbox round. Piece by piece, everything is explained to me in the 15-20 hour campaign by excellent and understandable English speakers.

The tasks become more complex from map to map. While at first the tavern with a cooking area was the big goal, soon it’s the iron forge so that I can build archers and swordsmen. After all, there are pirates and Edgar, the great rival of our beloved King Richard of England. They can be aggressive, so a good defense is important.

But the equipment for the big slash-and-burn has yet to be built. This requires bread, cows, sheep, and weapons as well as siege equipment. I can place the individual buildings as scaffolds on free areas and turn them in the desired direction. Unfortunately, the ground must be flat, you are not allowed to build on slopes. Never mind, there is usually enough space. 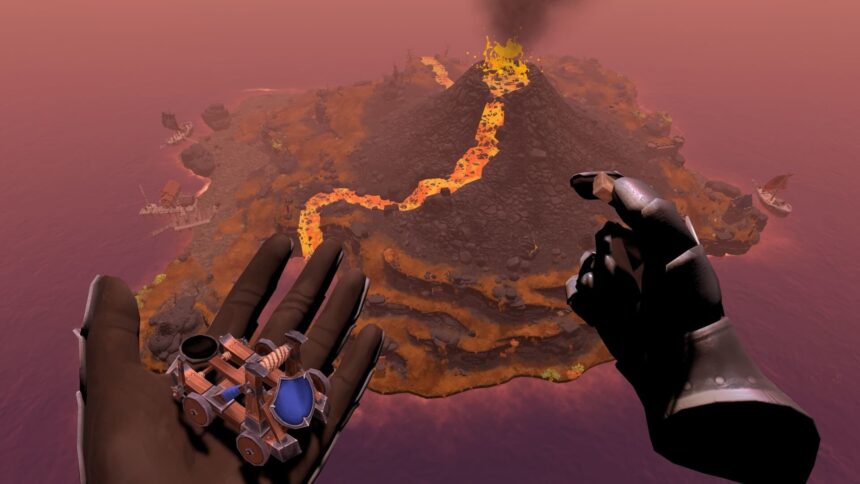 Whether against pirates or usurper Edgar: With a catapult, I can shoot all kinds of stuff at the enemies of my settlers. | Image: HandyGames

Once the houses are finished, I can build extensions, such as the slaughterhouse for the hunting lodge, so that the huntress can also expertly convert cows into meat and leather. Or I can build a herb garden for the church to heal injured units.

In the library – also a church annex – a few clergymen conduct research. If I want to build the third level of my dwellings, for example, the settlers have to learn how to do it at all. The nun is reading several books for this purpose, which is just wonderful to look at, as are the hundreds of other detailed animations.

There is always something to do

In general, the level of detail is fantastic. Fine grass grows on sharp ground textures, the trees sway when I run my hand through the treetops … oh, sorry! – Unfortunately, I caught the lumberjack lying there in a daze for a moment before he got up, sharply criticized me with his fists raised to the sky, and then went on with his day’s work.

I could rave for hours. About the sheep, the idyllic ponds with fish, the hawk that at some point simply lands on my hand, the clouds that I shoo out of my field of vision with a wave of my hand, and the seagull that steals the entire leg of meat from the hunter.

As an old build-up guru, I, of course, find room for improvement, which I won’t hide in this ode to Townsmen VR. There are a few small bugs here and there, sometimes a sound loop, sometimes an animation loop.

The squad control is kept very simple, and archers like to shoot their own buddies in the back. Settlers unfortunately only realize at the end of their path that their god – That’s me! – has already replenished the material at the workplace. In addition, there are “only” the campaign maps in the free game: I would so have liked to explore more, new islands. The latter is actually more of a compliment to the world builders at Handygames. 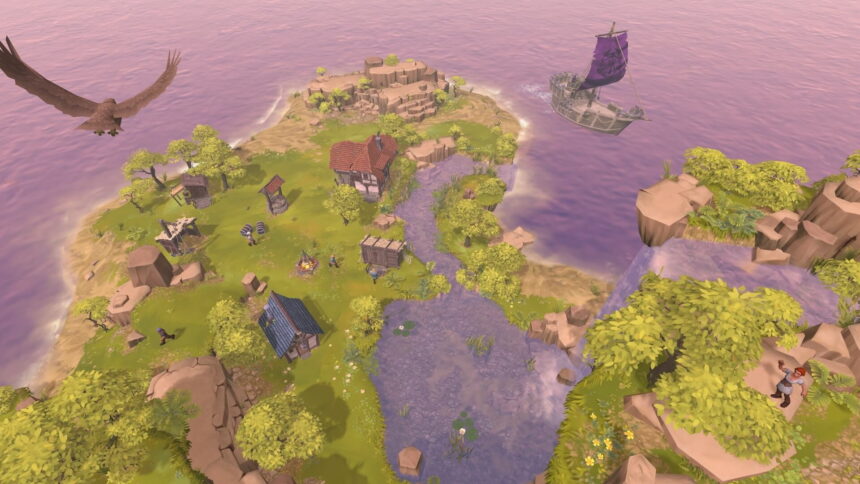 Townsmen VR offers some of the most beautiful panoramas in gaming history. Screenshots don’t begin to do it justice. | Image: HandyGames

I played Townsmen VR with the Meta Quest 2. It works very well via the Meta Link cable as well as Air Link. The latter, however, drains the battery much faster, so I recommend the cable, which is not noticeable at all, since you do not have to turn, but can control everything with your hands.

Townsmen VR review conclusion: A game for the Hall of Fame

I celebrate Townsmen VR even more than I celebrated Cities: Skylines at release. It opened my eyes as a construction game fan: Because building games on PC are nice – but they’re not alive. They’re still just on a 2D monitor. They’re flat and distant.

If you’re a construction game fan playing Townsmen VR, you don’t want to go back to the monitor – at least that’s how I feel, and I have a hard time imagining you feeling any different. It’s a difference like night and day because I’m in the middle of it, not just in front of it. I see a whole microcosm of virtual life scurrying around me.

Of course, the studio’s craftsmanship has played a crucial role in this. Townsmen VR is nothing less than a playable work of art. I thank the studio from the bottom of my heart for producing this VR game in such outstanding quality.

I played Townsmen VR quite leisurely, often letting the settlers walk across large islands without constantly intervening. Not because I didn’t want to – I just enjoyed watching and relaxing. The music, the view of an idyllic, peaceful island bustling with activity – just great. Forget meditation apps for VR. If you want to switch off, Townsmen VR will bring you down better than any yogi.

Sure, there’s something that could be improved. Here and there, it takes a bit too long for workers to start their next task, and I have to actively help get things going. Occasionally, the catchment areas for new jobs are too large: I just wanted to drop someone off at the fireplace, and bam!… he’s fishing because the pond is nearby.

But that’s mostly complaining on a high level. For me, there is no doubt: Townsmen VR is a game for the Hall of Fame and for me, a hot candidate for the VR game of the year. I can strongly recommend everyone to buy this VR game, play it at their leisure and show it to others – because it is a terrific plea for Virtual Reality.

You can buy Townsmen VR here: