Little Cities is a city-building simulation developed for virtual reality. I had the chance to play it and I am delighted.

The genre of construction games is underrepresented in virtual reality. Apart from the insider’s tip Townsmen VR (review) and the rather simple Spacefolk City, I can’t think of any other representatives of this genre right away.

This will change abruptly in the coming weeks: On April 28, Cities: VR, a VR adaptation of Cities: Skylines, will be released exclusively for Quest 2, followed by Little Cities for Quest 1 & 2 on May 12.

Little Cities is the underdog: it doesn’t have a strong brand behind it and is being developed by a husband-and-wife team instead of a big studio. Don’t worry about that, though. I’ve played the first two islands and am confident that Little Cities will find an enthusiastic following.

There’s one thing I have to say in advance of this preview: I’m a genre newbie and haven’t sunk much time into either Sim City or Cities: Skylines. If you’re looking for an expert opinion, you’ll have to wait for the review by my MIXED colleague and longtime building sim fan Ben.

This preview is meant for those who are curious about the genre and are toying with the idea of trying it out in virtual reality. Is Little Cities fun even if you’re not a city-sim nerd?

A playful introduction to the genre

Don’t worry: there are no boring tutorials in this game. Here you’ll be introduced step-by-step, building your first settlement.

The interface and menus are intuitively designed and easy to use, since they are based on simple hand movements. The same applies to locomotion. Whether you play sitting or standing, Little Cities controls smoothly.

The game forgoes complex hand interactions in favor of a simple point-and-click system, which I think is good in this case. It would be exhausting in the long run to build or tear down every single building by hand movements. 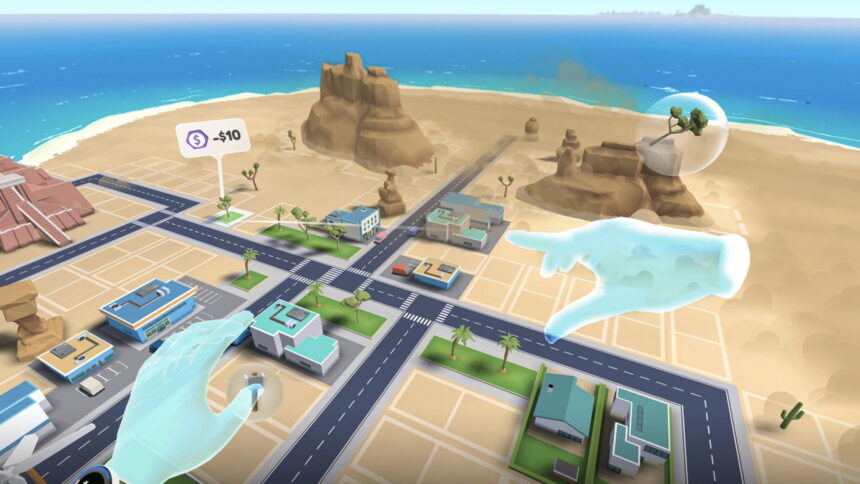 When it comes to controls, Little Cities relies on efficiency instead of immersion. | Image: PurpleYonder

The building areas are limited to one or more islands. First, you lay a network of streets. Along these roads, you can build houses, stores, and factories according to your wishes. A 3D diagram shows you what the demand is. Importantly, there should always be a little distance between residential and industrial quarters, otherwise the citizens will be unhappy.

Next, it’s time to secure the electricity and water supply. Wind turbines and water extraction plants should be built in suitable places, and the game will take care of the rest. This is followed by the construction of a police station, a fire station, and a hospital.

The bigger the city gets, the more demanding the citizens become. With each level, you unlock new buildings and facilities. At a certain level, the city can expand into new areas. All of this is financed with tax money that rolls in weekly.

At least on the first two islands, there is no pressure of time or action. The cities develop at the pace you set for yourself. Watching settlements grow into lively towns is a great pleasure. The music adds to the relaxing ambiance and in no time at all an hour or two will have passed, so smoothly and pleasantly does Little Cities play.

The game does without complicated administration systems, angry citizens, and natural disasters – at least on the first two islands. In the first hours, when I got to know the game, this was pleasant. For the rest, I wished for a bit more ambition and complexity. It seems to me that I can do (almost) nothing wrong and city building is a no-brainer.

That has to change on the remaining, higher-level islands to keep me motivated longer. At least, on the second island, I had to deal with sandstorms that can be pushed back by planting trees. 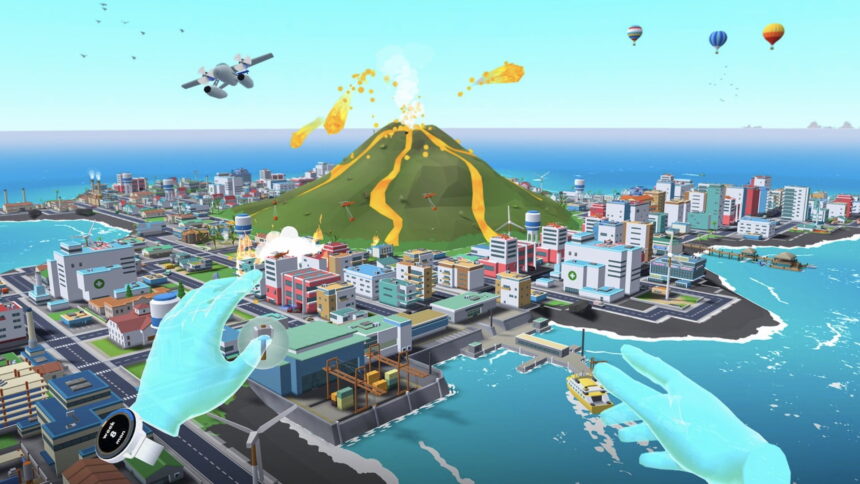 On later islands, you have to deal with adverse conditions and natural disasters. | Image: PurpleYonder

The graphics are in comic style and make a colorful and handsome impression. If you zoom in close to buildings and vehicles, they look like block buildings and are quite poor in detail. Citizens are not visible. All that can be forgiven, since you mostly play from a medium distance.

From this view, the city looks lively and the overall impression is simply picturesque. Hot air balloons and boats chugging around in the waters further embellish the scenery.

I had a lot of fun in my first hours of Little Cities without any previous genre knowledge. So, city-building dummies should have no problems finding their way around. An open question is how much challenge and new facets the rest of the game offers. Ben’s test will have to show that. Little Cities focuses on accessibility and a relaxing city-building experience in VR without headaches.

I wasn’t able to try out its competitor Cities: VR but, judging from the recent trailers, it will be quite multi-layered and require micromanagement, just like its big PC role model. The question will be what appeals more in the end.

Little Cities will be released on May 12 in the Oculus Store for about $20.