Sweet Surrender: What is the German VR shooter good for?

The team has kept its word and delivers improvements and new content at regular intervals. Five updates have been released since the beginning of October, which brought upgradeable player classes and new weapons, among other things. The game is expected to continue growing.

More information about the improvements and new features can be found under Test Updates.

The roguelike shooter Sweet Surrender came out on Meta Quest 2 and PC VR headsets Last Week. I tried out the VR game.


Sweet Surrender is developed by Munich-based VR studio Salmi Games, which gained its first experience with VR development with smaller titles like GrowRilla and Late for Work.

The seven-member core team has been working on Sweet Surrender for almost two years funded by the German Federal Ministry of Transport and Digital Infrastructure.

The small studio has already cleared the biggest hurdle: It is allowed to publish the game in the strictly curated Quest Store and thus sell it in what is currently the largest and most lucrative app store for consumer VR content.

I played Sweet Surrender for about two hours over several sessions. I won’t make a final judgment at this point for two reasons: On the one hand, you usually have to play roguelikes a bit longer to judge the scope and depth of the game, and on the other hand, Sweet Surrender feels like it is only at the beginning of its life phase and still looks a bit unfinished in places.

Therefore, I’ll wait a bit and submit a proper review as soon as the game has matured further and received the first free DLCs.

Sweet Surrender is a first-person shooter with roguelike gameplay mechanics. Players fight their way up a tower-like city, blowing away hordes of enemy robots. The difficulty level increases with each new level and, if you die, you have to start all over again. Only through repeated failure do you learn how to master the game.

Currently, players can shoot their way through four successive areas: the mines, the slums, the industry, and the modern urban area. I made it to the industrial area during my short playtime, and that was only because I got lucky and found an upgrade chip that turned my blaster’s projectiles into explosive bullets. At each stage, players can install two upgrade chips that increase the damage of the wielded weapon or the health points.

Scattered throughout the levels are small, medium, and large gears that represent the in-game currency used to buy vials of life energy and upgrade chips at the end of each level. These are indispensable for survival.

The environments look generic and, graphically, the game only pleases in the PC VR version. | Image: Salmi Games

A game that knows no mercy…

Experienced players will need about 30 to 45 minutes to fight their way through all four areas, estimates studio founder Yacine Salmi. However, this requires a lot of practice. In most of my attempts, I died in the first area of the game. Junior Rambos need to watch out: Sweet Surrender doesn’t forgive mistakes or reckless actions. If you want to survive, you have to act with utmost caution.

The game offers a range of one and two-handed weapons, as well as melee bludgeons and a grappling hook that can be used to fly across rooms. I haven’t tried out the latter much yet, since it would cost me my virtual neck in battles.

Sweet Surrender confronts you with plenty of enemy types that move and attack differently, but aren’t particularly clever. Most of the time it’s their number rather than intelligence that poses a threat. 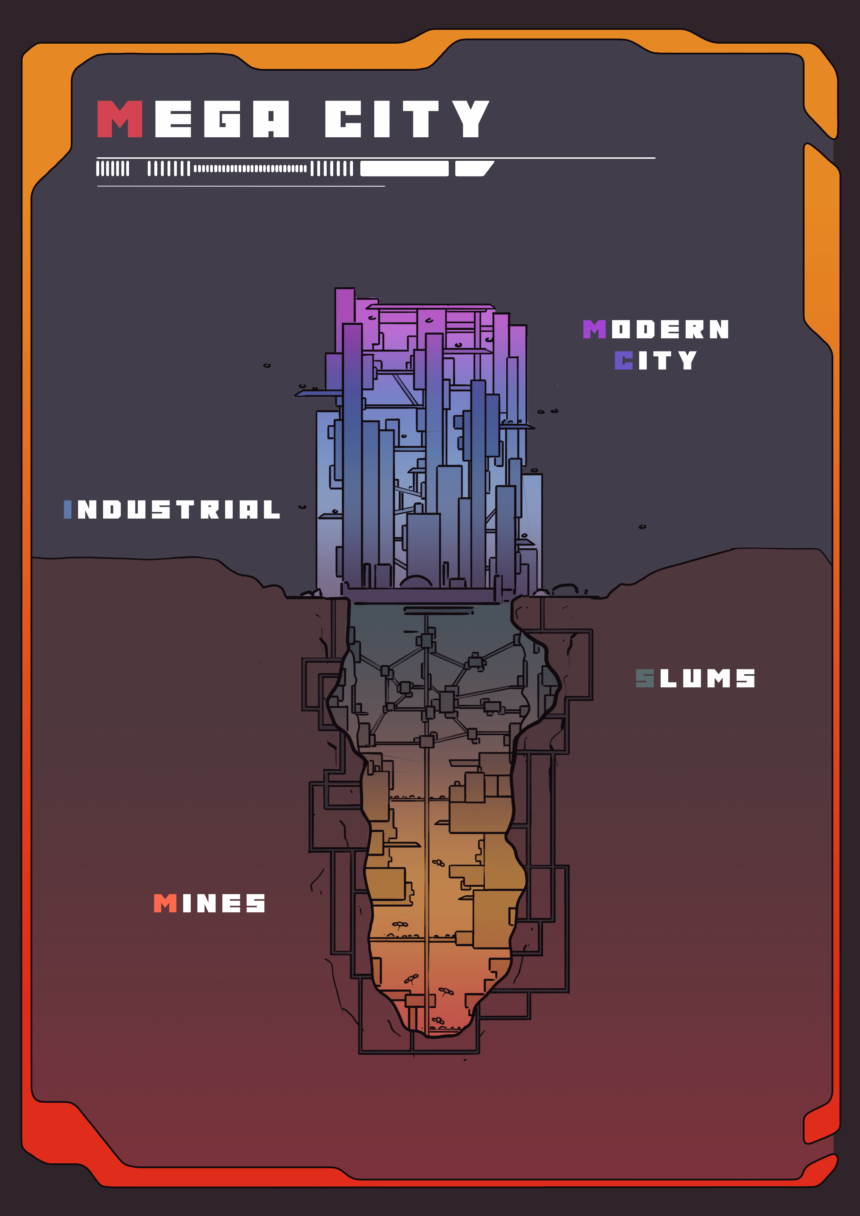 …and still has some simmering to do

The four areas of the tower are composed of three sublevels each. These are randomly selected from a larger pool of pre-made levels during each playthrough. The same randomness principle applies to the gears, weapons, upgrade chips, and enemies. Where and in what number they appear is rolled anew each time. This randomness factor is meant to keep the game varied over time.

After two hours of play, I’m not sure if it succeeds. Sweet Surrender still lacks refinement, polish, and balancing, as well as content and systems that motivate repeat playthroughs.

If I die, I lose the equipment I’ve earned. The VR titles Until You Fall and Cosmodread function according to a similar game principle, but here you take something with you after each demise that helps with the next playthrough. This progress is incredibly motivating.

“Currently, there is no progress that can be unlocked from run to run,” studio director Salmi tells me. “The focus right now is on learning the systems and improving.” 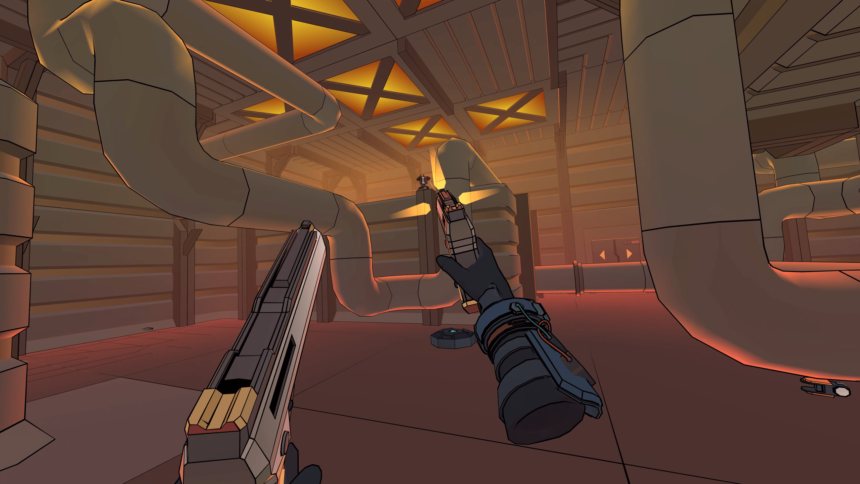 The game has decent pace and ambition. The smallest mistakes lead to game-over. | Image: Salmi Games

Sweet Surrender: the best is yet to come?

I also noticed one or two bugs. One of the game’s special features is the physics simulation: many objects react to hits and explosions. In my case, a failed collision detection led to me melting into a container and having to wrestle with it until it finally fell off of me. In a running battle, this would have meant certain death.

Salmi Games wants to really take off with the launch of this game. First, the team wants to take care of bugs and balancing and then regularly release free DLC content, including game areas, weapons, and upgrade chips. Also planned: unlockable character classes and other new features and systems that will keep players engaged for a longer time. The studio wants to collect feedback from the community on Discord and then implement it.

What the Quest 2 version urgently needs, in my opinion, is a higher resolution or edge sharpening. Sweet Surrender’s cel-shaded graphics only look nice in the high-resolution PC VR version. On Meta Quest 2 (review), the image flickers and the world looks sterile and unfinished.

Still, if you buy the Quest 2 version, you get the Rift version for free and can enjoy Sweet Surrender on the PC, preferably wirelessly with Virtual Desktop or Air Link (instructions).

Update 5 introduces two new classes: the Grenadier, which specializes in explosive damage, and the Lunatic, which is a special challenge for experienced players. Additionally, there are two new weapons: a sawed-off shotgun and a grenade launcher.

The team has also reworked almost all weapons, Improving hand positioning and animations for firing and reloading. More details can be found in the update log.

The game will continue to be maintained and expanded. The further development roadmap can be viewed online.

Update 4 is released and brings the first cross-run progress with upgradable starter classes.

More details can be found in the update log.

Salmi Games is working on bug fixes, game improvements, and new content. Three updates have been released since the beginning of October.

The fourth update is supposed to be the first content update and will bring unlockable starting configurations. It will be free of charge.

You can buy Sweet Surrender here: