February and March show: Meta has probably filled the growth potential in the PC VR market at the moment.

Valve’s monthly hardware and software survey records all VR headsets that were connected to PCs with a Steam installation at least once in the month in question and whose users participate in the survey. Among other things, the statistics show the percentage of SteamVR users in the total Steam user base.

Since Steam had an average of 132 million monthly active users 2021, the 2.13 percent SteamVR userbase should roughly correspond to 2.8 million users with SteamVR-enabled VR headset.

The following statistics show the market share of VR headsets tracked by Steam in February and March 2022. Devices that have less than one percent market share are not listed.

VR users who exclusively use Meta platforms and Viveport and do not have Steam installed or do not participate in Steam data collection are not included in the statistics, nor are PSVR players and Meta Quest 1 & 2 users who use their VR headset in standalone mode only. Accordingly, the SteamVR statistics only reflect a rather small part of the entire VR market.

In March, Valve Index grew the most, followed by Meta Quest 2, Windows Mixed Reality, and HTC Vive Cosmos. The latter placed ahead of HTC Vive Pro for the first time. 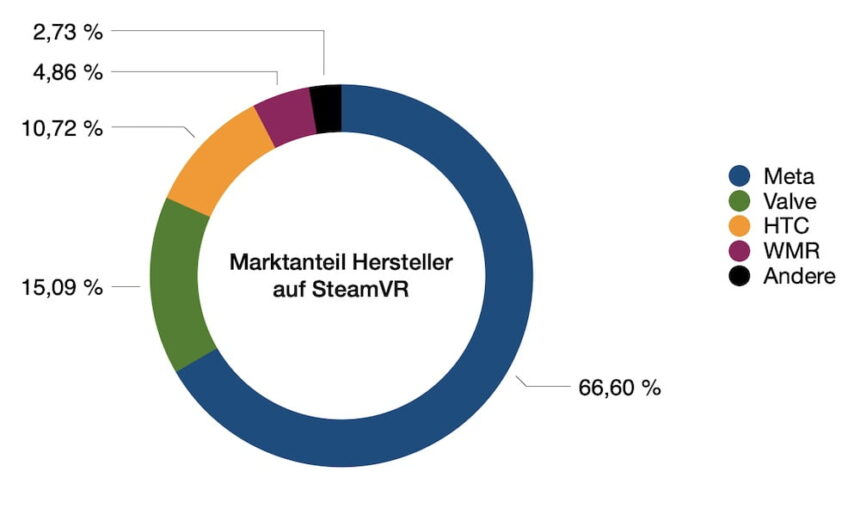 Meta dominates two-thirds of the PC VR market and there shouldn’t be much more to come. | Diagram: MIXED

Meta Quest 2 saw its weakest growth in March since launching in October 2020, and Meta’s overall SteamVR share fell for the second straight month to now 66.6 percent, exactly two-thirds. Both are signs that Meta’s PC VR expansion has reached its limit.

For the time being, no major shifts in the statistics are expected. Neither Meta nor Valve nor any other manufacturer has announced VR headsets that could have a big impact on the overall picture.

How often and intensively SteamVR glasses are actually used cannot be seen from the above data. The following statistic, which shows the monthly average of maximum simultaneous SteamVR users, gives an idea.

The Playstation VR 2 could have a positive effect on the PC VR market in the coming years. It is to be expected that more studios will develop high-end VR games again and some of these titles should also appear on SteamVR. Sony’s new VR headset hasn’t been released yet, and it should take a while for the platform to grow to a relevant size that has a ripple effect on SteamVR.