Valve’s monthly hardware and software survey captures all VR goggles that were connected to PCs with Steam installed at least once in the month in question and whose users participate in the survey. Among other things, the statistics show the percentage of SteamVR users in the total Steam user base.

The previous record value is 2.31 percent (May 2021). During the summer, the percentage dropped to 1.74 percent (August 2021), closing the year at 1.93 percent. In January 2022, the value increased to 2.14 percent. The reason for the increase is a flood of new Quest users who connected their VR glasses to a PC after Christmas. 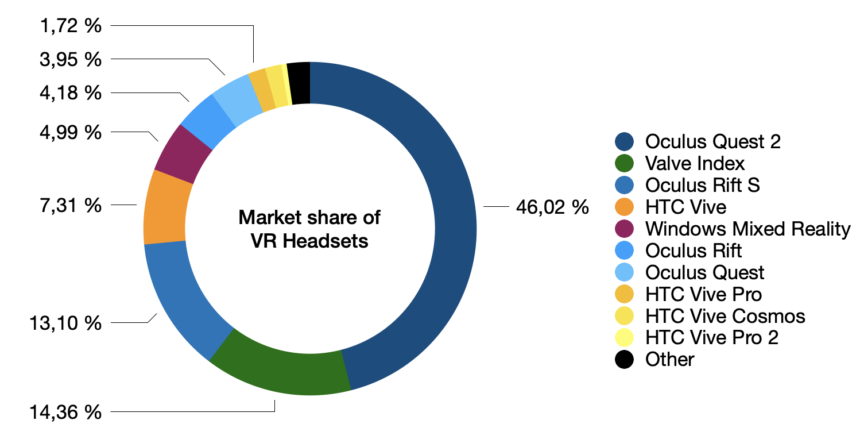 Since Steam had an average of 120 million monthly active users in 2020, the 1.93 percent SteamVR user base is roughly equivalent to 2.5 million PC VR users.

The following statistics show the market shares of VR glasses covered by Steam in December 2021 and January 2022. Devices that have less than one percent market share are not listed.

VR users who only use Meta platforms and Viveport and do not have Steam installed or do not participate in Steam data collection are not included in the statistics, nor are PSVR players and Meta Quest 1 and 2 users who only use their VR glasses as a standalone device. Accordingly, the SteamVR statistics reflect only a relatively small portion of the overall VR market.

Meta Quest 2 made the second-biggest jump in its SteamVR history last month, growing by more than six percent. Only January 2021 saw an even higher figure, with a 15 percent increase. All other VR devices suffered losses, with PC-exclusive VR goggles Oculus Rift S and Valve Index dropping the most.

With the new Quest 2 peak, Meta has a SteamVR market share of 67.25 percent. This value includes all other SteamVR-enabled devices from the manufacturer, i.e., Oculus Rift, Oculus Rift S, and Meta Quest 1, which means that more than two-thirds of all VR goggles used with SteamVR come from Meta. 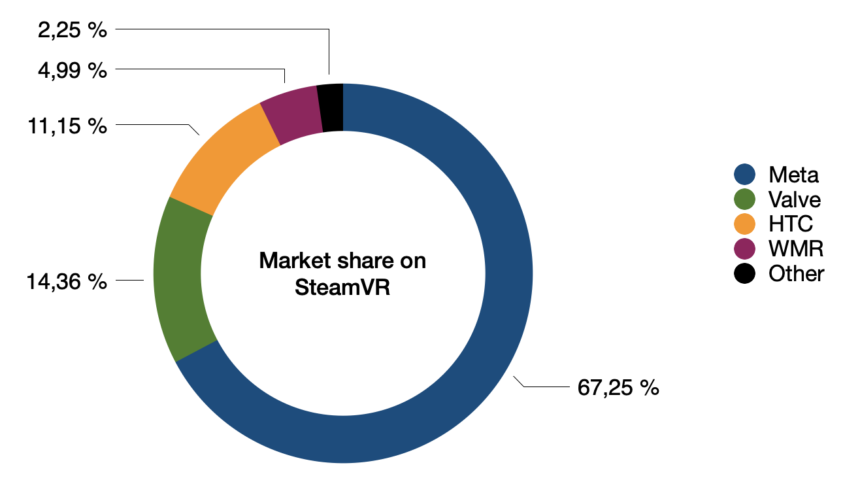 Nothing new with PC VR

How often and intensively the SteamVR glasses are actually used is not evident from the data above. However, the monthly average of maximum concurrent SteamVR users gives an idea.

This number climbed to 18,400 in December 2021 and should reach a new high in January 2022. This would be in line with the trend of the last few years, which shows a linear growth with occasional spikes up and down, reaching a slightly higher standard level after each Christmas.

The statistics show how tiny the PC VR market still is after almost six years, which is why most developers have now turned to the Quest ecosystem.