SteamVR in February 2022: Can Quest 2 continue to grow?

In February 2022, Meta’s market share on SteamVR stagnated. How much growth potential does Quest 2 still have?

Valve’s monthly hardware and software survey records all VR headsets that were connected to Steam PCs at least once in the month in question and whose users participate in the survey. Among other things, the statistics show the percentage of SteamVR users in the total Steam user base.

Since Steam had an average of 120 million monthly active users 2020, the 2.12 percent SteamVR userbase should roughly correspond to 2.5 million PC VR users.

Meta’s PC VR growth: Is there an end in sight?

The following statistics show the market shares of VR headsets covered by Steam in January and February 2022. Devices that have less than one percent market share are not listed.

VR users who only use Meta platforms and Viveport and do not have Steam installed or do not participate in Steam data collection are not included in the statistics. Neither are PSVR players and Meta Quest 1 & 2 users who only use their headsets in standalone mode. Accordingly, the SteamVR statistics only reflect a small part of the overall VR market.

In February, only Meta Quest 2 saw significant growth. In January, the VR glasses grew by more than six percent due to the Christmas business and a flood of new Quest users who connected their VR headset to a PC.

The question is how much more the top dog Meta can grow. The majority of index users will probably remain loyal to Valve, so only HTC and Windows Mixed Reality still have market shares to gain. Five to ten percent could still be possible, especially since the manufacturer will probably not have any competition. At least in the low-price segment. 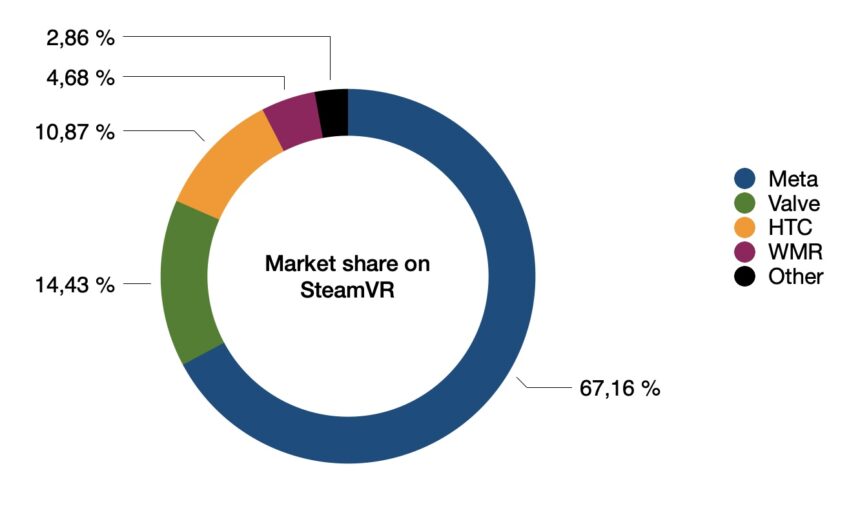 Two-thirds of all VR headsets used with SteamVR are made by Meta. | Bild: MIXED

How often and intensively the SteamVR headsets are actually used cannot be seen from the above data. The following statistic, which shows the monthly average of maximum concurrent SteamVR users, gives an impression. This number reached a new high of around 24,000 players in January 2022.

The increase is in line with the expectations of the last few years: Every new Christmas brings a flood of new PC VR users, whose number is reflected in a persistently higher average level.

How many of these gamers regularly buy and use new VR apps is unknown. This would be a better indicator of the profitability of the PC VR market than the number of concurrent users.

It would also be interesting to know if and how much Meta Quest 2 has expanded the PC VR ecosystem. Since we don’t have absolute user numbers, we can only speculate here. It’s unlikely that Meta Quest 2 has changed the game. Most VR studios are still developing for the more lucrative Quest ecosystem, and big PC VR-exclusive games are not on the horizon. Exceptions prove the rule.