“Schrumpfland” is a fascinating new VR experience in Germany

Experience the famous Miniature Wonderland in VR: At the Hamburg Model Museum, you can now dive right into the miniature world.


Visiting the famous Miniatur Wunderland in Hamburg’s Speicherstadt is something you should definitely have done. But if you’ve ever been there, you’ve probably wondered at least once during your visit what it would be like to be able to walk right through this fantastic miniature world yourself.

This is now possible: In cooperation with VR experts from Europa-Park, the world’s largest model railroad has developed a VR experience that shrinks visitors into the miniature world – and thus enables completely new perspectives.

Normally, I’m a giant in the miniature landscape of the “Wunderland” in Hamburg’s Speicherstadt warehouse district. From the outside, kept at a distance, I make my rounds through the model landscape and view everything from a bird’s eye view.

But now, thanks to VR technology, I can immerse myself in part of the exhibition: The makers Frederik and Gerrit Braun talk about a visit to “Schrumpfland” (Shrinking Land). Since April 1, Schrumpfland has been open to all visitors from the age of eight.

I can choose between two VR experiences: A 30-minute visit to the VR wonderland (“Die verrückte Schrumpftour,” €29) or the ten-minute “Mission: Rulantinca” from Europa-Park (€12). Under the name “Yullbe” (abbreviation for “You will be”), Europa-Park in Rust has been operating VR experiences for some time. Amber Blake VR: Operation Dragonfly will be launched there shortly.

While the first VR experience in Hamburg has more of a mystical bent, the second tells a small, funny story in Wonderland. Visitors – always in groups of about five – take a short train ride through the famous miniature land.

Then something goes wrong: I suddenly see much more of the Wunderland than I was supposed to and have to solve tasks in a team with the other participants. 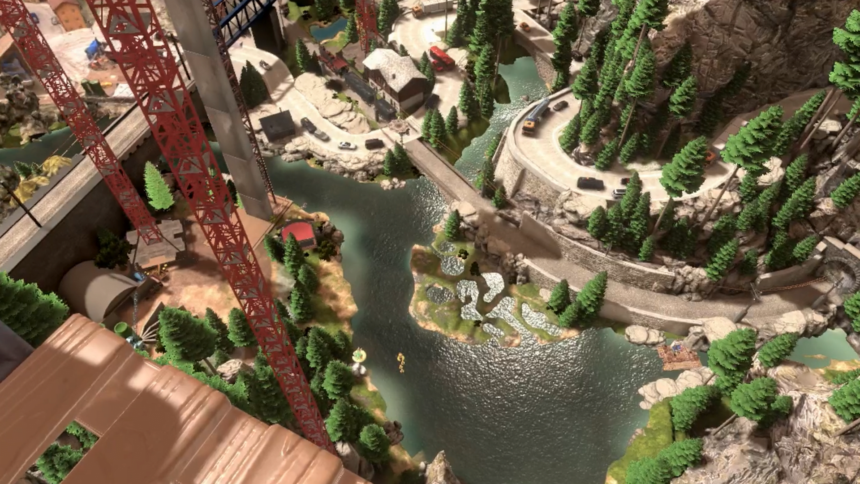 Right in the middle, instead of just looking at it from above: In the VR experience of the Miniatur Wunderland Hamburg, you experience a story in the middle of the famous model railroad world. | Image: Jörn Schumacher

What model railroad fans have long dreamed of is now possible, such as a ride on a panoramic train through Miniature USA or the Swiss mountains. I ride elevators, fly on the back of a bee and extinguish a fire with the Wunderland fire department. All of this is done without any hustle and bustle – anyone who has never had anything to do with virtual reality will not be overwhelmed here.

“This has always been our dream,” says Frederik Braun, “You look at this miniature landscape and would like to put yourself in it. With the high-tech of today, it’s finally possible.”

Augmented reality (AR), by the way, was out of the question for the brothers who founded the Miniature Wonderland 21 years ago: “We didn’t want visitors to stand in front of the landscape with their cell phones and have to scan everything.” Instead, one of the brothers had experienced a VR roller coaster ride at Europa-Park Rust – and was immediately hooked.

The technology is impressive: The 48 pieces of VR equipment cost around two million euros. On their backs, visitors carry a ZVR-G2 computer from HP like a backpack. The VR headset used is a Pimax 8k Plus. The equipment is completed by a helmet, in which VR headset, infrared sensors, microphone and headphones are integrated. The helmet was specially made for the Miniature Wonderland. 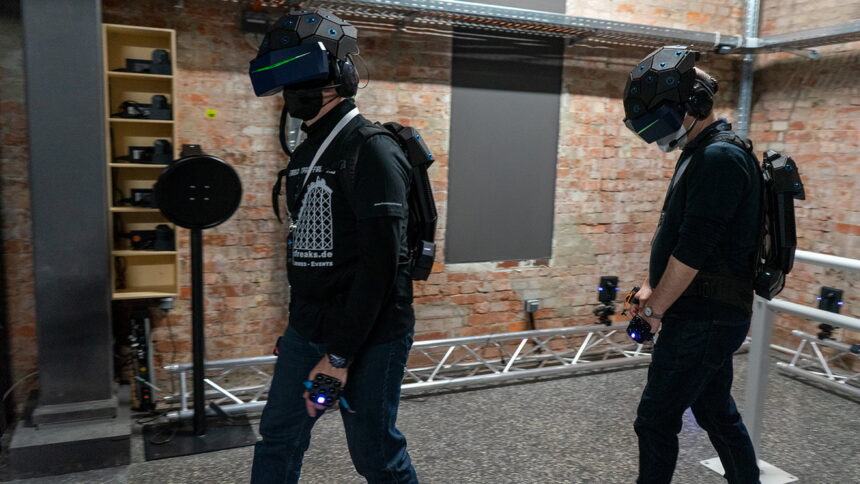 Visitors also receive infrared sensors for their hands and feet. Together with the sensors on the head, the entire body is thus displayed as a virtual figure. 154 cameras in the 250 square meter area record the movements of the participants in real time.

There are no haptic gloves, but the developers have placed real levers and buttons here and there, which can also be seen in exactly the same position in VR and with which the players interact. 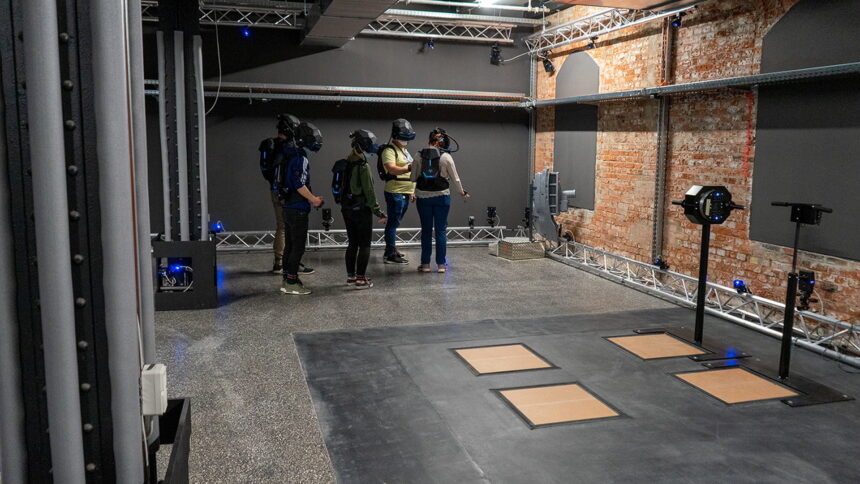 Part of the large VR play area of the Miniatur Wunderland in Hamburg with a group of players. | Image: Jörn Schumacher

Having to wear the bulky helmet for half an hour may not be particularly comfortable for everyone. But I was impressed by the resolution of the 8K glasses. The fact that the entire body is tracked, and not just the VR headset and both hands as is usually the case, also provides a significant immersion boost compared to VR applications at home.

The closed headset isolates me excellently from the outside world. I communicate with my companions via the built-in microphone. Those who are prone to motion sickness should hardly be strained in the Wunderland game: There is admittedly an occasional trip by train, an elevator ride as well as a short flight. In addition, I sometimes have to overcome smaller chasms with a courageous step – but that shouldn’t cause any problems.

So far, almost all visitors have been thrilled, says Philip Rüd, the VR team leader at Wunderland.

Is the visit worth it? At first, the amount of technology may be irritating, especially the large helmet. Through the headphones, I had to distinguish not only the music but also the announcements of the presenter and the comments of the players.

But after a few minutes I got used to it. I especially liked the moment at the beginning when I was shrunk to miniature size and the reverse process at the end. It reminded me a bit of the classic “Gulliver’s Travels”. 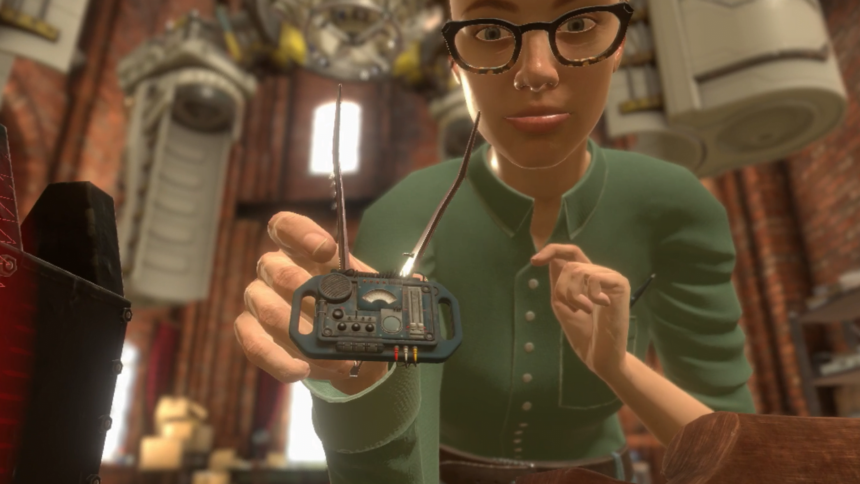 The biggest strength of the VR experience is the large playing area, which I walk across with real steps. I would prefer to explore the virtual wonderland on my own, but unfortunately, the story doesn’t allow for that.

Nevertheless, the visit to the Schrumpfland is great fun: The stories are well told and there is no stress. The interactions with the players, who are more than just the “face-and-hand avatars” of current social VR platforms, are excellent.

It should not stop at the two VR experiences, says Wunderland boss Braun. “What you can do with this technology is limitless. We already have ideas bubbling over. There’s a lot more to come.”