A video illustrates how we might work in the Metaverse office in the future – with AR glasses, hand tracking, digital monitors and an (almost) completely digital interface.

Currently, many are talking and writing about the Metaverse (thanks, Mark!) and how it might change our lives and work. Developer Greg Madison shows it in pictures: The developer, who is employed by Unity and specializes in XR-UX, has created an impressive demo of what he calls a “semi-virtual computer for the Metaverse” using the 3D engine.

Remember, according to Meta CEO Mark Zuckerberg, the Metaverse is when we use XR glasses more than traditional devices for our everyday digital lives. With Madison’s “semi-virtual” keyboard computer, that Metaverse vision would likely be fast approaching.

On Madison’s XR workstation, the only things physically present are the keyboard and the Quest 2 headset. Through the black-and-white cameras of the headset, he looks at the keyboard, which serves as the anchor point for starting the digital computer.

Digital, flexible screens form around the keyboard, with gestures and virtual interfaces Madison clicks, scrolls and dives through the 2D and 3D content in front of him. Thanks to the camera view, he always has the real environment in view. 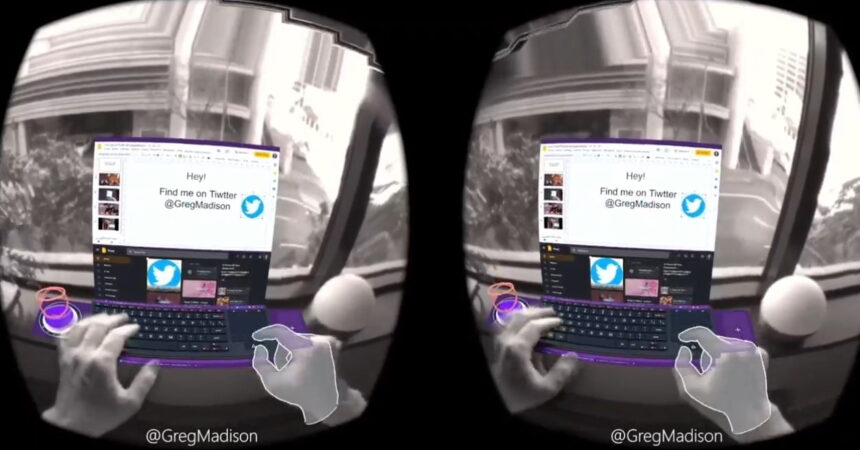 Madison operates the semi-virtual computer as usual via mouse and keyboard or directly via hand and finger tracking. The screen adapts flexibly to the software and can be expanded in any direction to include new elements. | Image: Greg Madison

The real keyboard gets a digital overlay with virtual touch surfaces, rotary controllers and color-coded keys to match the running software. According to Madison, the demo works with a Logitech K830 keyboard and Apple’s Magic Keyboard.

Depending on the active program, Madison fades in different screens and screen variants – for an editing program, for example, an extra window appears with a track overview. At the touch of a button, the digital 2D screen becomes a 360-degree landscape that surrounds Madison, almost like a VR experience.

The VR headset as a smart screen

Another highlight in Madison’s compact office of the future are virtual instruments that hover above the desk. A glowing stick, for example, changes the incidence of light in the 3D scene the artist is working on when it is rotated.

Madison flies through the 3D landscape with a miniature digital camera, which he guides through the scene by hand tracking. The image on the monitor changes according to the camera angle. The digital input does not have the haptics like a mouse. But the XR surface is natively 3D, which can be an advantage when editing 3D content.

“You don’t really need thousands of distracting virtual screens, you just need one smart one to get things done,” Madison writes on his video.

Back in early 2020, the former magician designed a mixed reality counterpart of his real home, which he later turned into a domestic mixed reality game. At Unity Labs, Madison is also working on social experiences like the mixed reality chess game Slices, which is being created in partnership with Meta.

In the future, such projects and concepts are likely to benefit greatly from the high-resolution augmented reality mode of Meta’s planned VR AR headset, Cambria. Apple is also said to be planning such a mixed reality device and will launch it in late 2022 or early 2023. Most likely, it’s visions of the future like Madison’s that motivate Meta or Apple to invest billions in VR and AR.