The slim yet self-sufficient Android data glasses “Nimo” from the manufacturer “Nimo Planet” are said to be able to superimpose up to six virtual screens into the field of view simultaneously and launch common Android apps.

The Indian start-up Nimo Planet says it has been working on the data glasses for around four years with around ten people in the team. Expenditures during this time amount to a ridiculously low – by Western standards – $300,000, according to Wired.

The glasses run the “Nimo OS” software, an Android-based in-house development by the manufacturer. It does not have official access to the Google Play Store, but many Android apps are still supposed to run on the Nimo glasses by default, for example, if you pull them directly from the provider. Slack or Microsoft apps like Word or PowerPoint work, as well as web apps directly in the browser.

Regarding hardware, Nimo relies on a Qualcomm Snapdragon XR1 integrated into the glasses, which renders on two 720p displays. The up to six virtual screens are supposed to offer a virtual equivalent of a 45- to 50-inch screen. 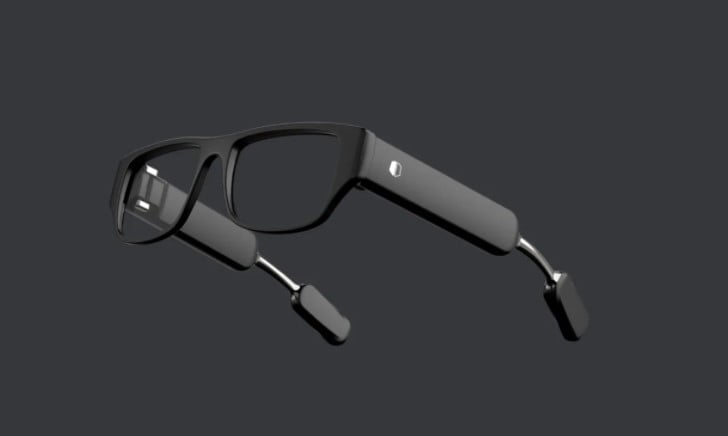 The Nimo glasses are relatively slim, with only the thick temples giving away that they are tech glasses. The glasses are expected to become even slimmer and lighter by launch. | Image: Nimo

The battery currently lasts around two and a half hours, but the manufacturer still sees room for improvement with further optimizations. The included carrying case with built-in battery serves as a mobile charging station.

Headphones, keyboard or mouse can be connected via Bluetooth. If you don’t have any external accessories at hand, you can control the glasses via head movements and a touch surface in the temple. The glasses support WLAN, but not a mobile connection.

The prototype currently weighs 120 grams, which is expected to drop to around 90 grams by launch. Anyone who needs corrective lenses in the glasses must have them exchanged by an optician.

Nimo Planet CEO Rohildev Nattukallingal describes the Nimo glasses as a productivity-focused work device. The manufacturer deliberately does without a camera, speakers, depth sensors – in other words, hardware that would be necessary for a high-quality AR experience beyond a pure display function.

“We want to make the hardware as simple as possible and make sure the multiscreen productivity works great […] all the big companies are focusing to build the next mixed reality world, but our approach is more about how we can help someone work anywhere without compromising productivity,” Nattukallingal says.

According to Nattukallingal, there are currently 2,000 people on the waiting list for Nimo glasses, which are scheduled to launch in the first half of 2023. The launch is expected to happen first in select cities in India and the United States. The price is 800 US dollars.

Interested development studios can request a developer kit from Nimo, and companies can reserve glasses in advance.