Market researchers dampen expectations for Apple’s headset, while Meta’s strategy is seen as unsustainable in the long term. How will the VR industry develop in the next few years?

In a report, market research firm IDC publishes current figures on global sales of VR headsets. The industry is growing and Meta is saluting from the top. In 2023, that could change due to increasing competition from Apple and Sony. However, Meta has an advantage.

According to the market researcher, global sales of VR headsets increased by 241.6 percent year-on-year in the first quarter of 2022. However, it should be noted that in the same period of 2021, supply problems occurred due to the pandemic situation, which slowed down sales.

According to IDC, Meta was able to expand its market share to 90 percent. This was mainly due to the still very popular Meta Quest 2 and its exclusive content. Another important factor is that Meta subsidizes the standalone VR headset.

The Meta Quest 2 is still an investment in the future for Meta. The company does not make a profit from selling the hardware, but tries to reach as many customers as possible with a low price. Meta’s VR strategy seems to be paying off. Meta might have already reached the self-imposed goal of ten million users in the Oculus ecosystem.

IDC: Meta’s strategy not sustainable in the long term

However, Jitesh Urani, Research Manager at IDC does not consider Meta’s subsidy strategy to be sustainable: “Meta continues to pour dollars into developing the metaverse but the strategy of promoting low-cost hardware at the expense of profitability isn’t sustainable in the long run.”

On a positive note, Urani sees a change of course with the previously announced high-end Project Cambria VR headset. Meta’s upcoming productivity-oriented headset could serve as a starting point for the company’s swing toward higher-revenue hardware, he said.

According to Urani, this will also help increase end-user prices for the entire industry as average selling prices increase and technology improves significantly.

IDC predicts further growth in 2022, with a 26.6 percent increase to a total of 13.9 million units sold. Moreover, 2023 could be a decisive year for the entire virtual reality and augmented reality industry. 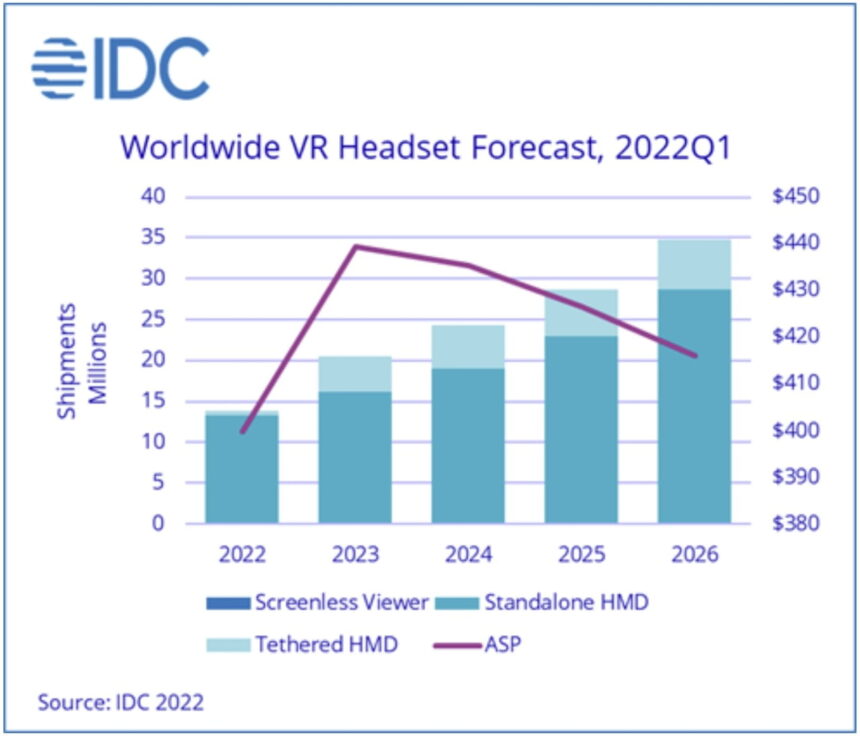 The market research company IDC forecasts moderate to good growth for the VR industry in the coming years. Headsets connected to a terminal device – such as a PC or console – are expected to become more popular again, but standalone VR will remain clearly ahead. | Image: IDC

The focus is on the next hardware generation with the planned or suspected releases of Pico, Meta’s Cambria and Meta Quest 3, Sony’s Playstation VR 2 and Apple’s VR headset.

Urani’s colleague Ramon Llamas sees Apple in particular in the spotlight, but urges moderation when it comes to expectations. It’s tempting to imagine that the company will ship large numbers.

However, it’s important to remember that this is Apple’s first headset, and it will appeal primarily to a small audience of early buyers and Apple fans, Llamas says.

“Further iterations will likely show evolution that will grow by leaps and bounds. In the meantime, companies like Meta and Sony already have a strong installed base and pent-up demand that they can tap into. Altogether, this is a strong driver to push the market forward.”

Older rumors about Apple’s upcoming headset confirm this thesis: Apple reportedly only expects a few hundred thousand units to be sold in the first year due to the niche application and the high price.