Is Pico Neo 3 Link just the beginning? Rumors say that Pico has a high-end VR headset in the pipeline and wants to outpace Meta.

Last week, the Pico announced the Neo 3 Link. The standalone VR headset is identical in design to the older Pico Neo 3 Pro, which is only sold to companies in the West.

With the Pico Neo 3 Link, Pico changes its strategy and brings a standalone VR headset for consumers to the Western market. In small numbers and only in Europe, but still.

The price of the Pico Neo 3 Link is roughly on par with the Meta Quest 2, which means that the hardware is heavily subsidized. This is made possible by the bulging wallet of the parent company and TikTok owner ByteDance, which is starting a first attempt to compete with Meta in virtual reality as well.

Admittedly, this attack is rather symbolic. The hardware is already pretty old and will not blow anyone away in 2022. Besides that, the device is only sold as part of a beta program and in very limited quantities of 20,000 units. 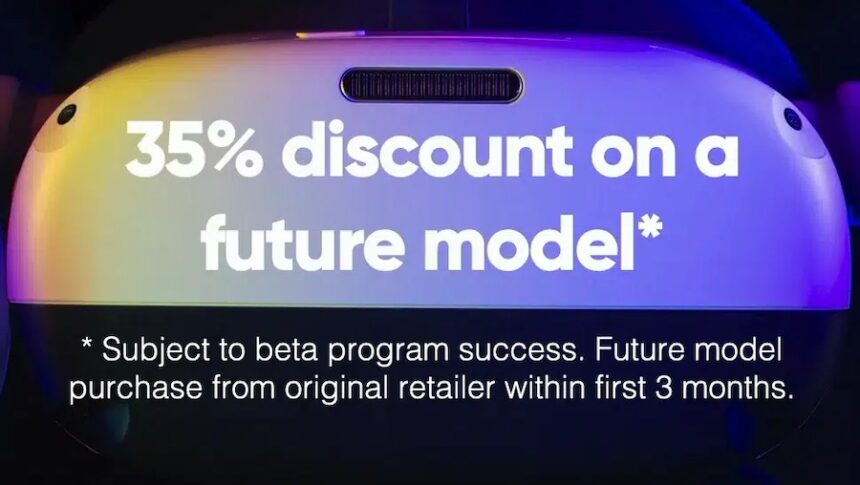 A quote followed at the end of the Neo 3 Link presentation, suggesting that a more advanced model is in development. | Image: Pico

The suspicion is that this is just a test run and that Pico has something bigger up its sleeve. The company fueled that speculation itself by holding out the prospect of buyers receiving a 35 percent discount on a future model if it is released within the next 12 months.

Youtuber and VR leaker Brad Lynch claims to have found out what Pico is working on and when the device will be released. His source of information is a Goertek analyst who contributed to the recent Cambria leaks. Goertek is the world’s largest manufacturer of VR hardware and builds devices for Meta and Pico, among others.

According to this source, the model that Pico alludes to is already being tested and is expected to hit the market as early as the middle of the year. The new device is not said to be a Pico Neo 4, but the company is planning with a Cambria competitor and a high-end device that will be a new product line – just like Meta’s new VR headset.

Technically, the device is expected to feature pancake lenses, a slimmer form factor, higher resolution, more processing power and eye-tracking. The VR controllers can locate themselves in space, as with Cambria and Magic Leap 2, Lynch says. However, there was no talk of face tracking or a high-quality passthrough mode similar to Cambria (info).

According to the source, the manufacturing costs for the Pico glasses are around 1,500 US dollars. The source could not name the targeted retail price.

However, parent company ByteDance reportedly wants to aggressively subsidize this and other hardware like Meta in order to occupy the market as early as possible. Around 500 million US dollars are said to go into cross-funding virtual reality hardware every year.

According to current plans, the device could appear in the West before Cambria, initially in Europe instead of the US. Pico follows a similar strategy with the Pico Neo 3 Link.

Meta is promoting the Quest 2 much more lightly in Europe than in the US, and the VR headset is not sold at all in Germany, one of the bigger VR markets in Europe – that is unlikely to change in the coming months. According to reports, ByteDance senses an opportunity to beat Meta in the European market.