A few select journalists were allowed to test Quest Pro in advance. What do they think of Meta’s latest hardware?

The Quest Pro, Meta’s first device in a new category, was released on October 25. The product line is aimed at businesses and professional users and complements the Meta Quest 2 consumer device.

The Meta Quest Pro costs 1,499 US dollars in the US and 1,799 euros in the EU. The headset supports virtual reality, but also offers an augmented reality mode via video passthrough, which Meta labels Mixed Reality mode.

UploadVR’s David Heaney sees the Quest Pro’s main use as business customers looking to upgrade to the Quest 2, or as a developer kit for mixed reality newcomers.

He does not recommend the device to consumers because the performance is slowed down by the Snapdragon XR2+ Gen 1 chip. The new multitasking with apps and browser at the same time currently still leads to stutters, despite the lush 12 gigabytes of working memory. The Quest 3 is scheduled for release as early as 2023 and could offer a more powerful chip at about a third of the price.

So far, VR without distractions is hardly possible with the Quest Pro, according to Heaney. The magnetic light shield won’t appear until December for $50. For apps that require rapid lateral movement, the Halo headband would also have to be uncomfortably tightened to ensure a secure fit. On the other hand, the VR headset is very comfortable when used at rest or while sitting with a loose headstrap setting.

Heaney is impressed with the image quality: The new pancake lenses provide better image sharpness, even towards the edges. The implementation of mini-LED backlighting with local dimming and quantum dots brings additional enhancements to the image, for example in black levels and colors, especially by LCD standards. The larger horizontal field of view of 106 degrees (Quest 2: 96 degrees) is also immediately noticeable.

Heaney sees the new controllers without tracking rings as an improvement. Thanks to the built-in camera tracking, they track more accurately and even when the controllers are not in sight of the headset cameras. A particular highlight is the new haptic feedback, thanks to additional motors under the index finger trigger and thumb grip button. According to Heaney, Meta has also made hand tracking much more stable, even next to the body.

Heaney is divided about the VR headset’s new features. Especially in this price range, a manual setup of the room for mixed reality applications is cumbersome, he says. The lack of the originally planned depth sensor could be to blame: Competitors like the Hololens 2 or the iPhone Pro automatically scan the room thanks to a dedicated depth sensor.

The depth-corrected passthrough color image is pleasingly well-adapted to the real world at the edge of the headset. Sizes and distances match exactly. However, the combined result from three cameras suffers greatly from the grainy and washed-out image quality. Even letters on a real keyboard are difficult to recognize through the cameras.

Face tracking has not proven very useful so far for Heaney. It is currently used by too few applications and cannot be used for PC applications via streaming, says Heaney. The seamless but spongy manual IPD adjustment only reaches 58 to 72 millimeters in practice. Officially, Meta promises 55 to 75 millimeters.

According to Ben Lang of Road to VR, those who simply want to play VR games will get a better device with the Quest Pro than they do with the Quest 2. However, the improvements are by no means worth the higher $1,500 price tag.

For professional work, the Quest Pro only makes sense in theory. Meta advertises the headset for use by architects, developers or in research, for example. In practice, however, usability issues and a lack of high-quality software from first-party vendors make the Quest Pro seem more like an experiment than a mature product.

Lang, like Heaney, criticizes the manual room setup required for mixed reality. He even describes the often slow user experience of switching between multiple apps, interfaces and avatars as a nightmare.

Not even Horizon Workrooms, Meta’s own office app, comes pre-installed. Users are therefore largely reliant on third-party apps that fit their specific workflow, such as Gravity Sketch for 3D design or Resolve for architects.

Despite improved AR options and face tracking as a nice extra, the image resolution is not high enough for passthrough use. Furthermore, the depth estimation for close objects is still a bit bumpy, Lang says.

The more compact form factor and the sharper display proved to be a slight improvement in the test, despite the stagnating resolution. Especially the image sharpness at the edge and the lack of God-rays are clear advantages of the new pancake lenses. According to Lang, the image quality is quite high.

Lang also singles out Quest Pro’s controllers as a key improvement, especially the strong haptic feedback. The tracking also remains stable behind the user’s body. However, they sometimes take quite a long time to synchronize with the headset (ten to 15 seconds).

CNET: Better wait for the Quest 3

CNET’s Scott Stein advises almost everyone interested in this technology to buy Quest 2 or wait for Quest 3, unless they are developers and want to use the latest technology as soon as possible. Key features such as eye tracking, face tracking, or improved color passthrough aren’t worth the extra $1,100, Stein writes.

Business users and researchers could see Quest Pro as a helpful bridging technology for AR. It could fulfill many of the promises of AR headsets like Hololens 2 or Magic Leap 2 – and serve as a full VR headset on the side.

The improved color passthrough makes the outside world seem more real than with the Quest 2’s black-and-white video AR. Despite the grainy image, the display is sufficient to make a virtual DJ mixer float in space, for example. 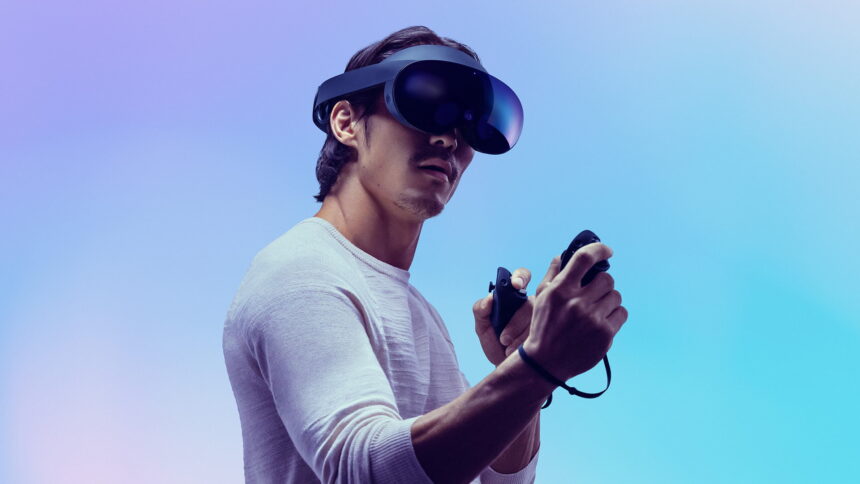 However, Stein mainly uses the device for virtual reality, since the current AR software hardly exploits the potential of the passthrough technology so far. However, due to the lack of light blockers, the VR experience was affected by distractions and light intrusion from the real world.

Like other reviewers, Stein praises the comfort of the Quest Pro with its better balance as well as the sharp image thanks to the pancake lenses. The resolution is only slightly higher, but Stein likes the contrast and black levels.

Stein also likes the new controllers. Drawing in apps like Painting VR felt much more natural with the new controllers, including subtle haptic feedback. Games like Eleven Table Tennis also felt more tactile. However, he criticizes the headset’s battery life of two hours as too low.

Tested: Quest Pro does not yet fulfill its promise

Norman Chan of Tested is pleased with the comfort of the Quest Pro headset, especially for glasses wearers. He says that the front can be pushed far enough forward, even with large glasses frames, so that glasses wearers can use the VR headset comfortably.

Chan praises the sharp pancake lenses, which also offer better weight distribution and no longer suffer from unwanted light reflections, according to Chan. So-called “mura” (uneven display) or color fringes (chromatic aberrations) are a thing of the past with the Quest Pro. Text remains well-readable even towards the edges.

Chan could hardly find any contrast benefits from local dimming and mini-LED in his test: He suspects that Meta uses the backlight with deliberate restraint in order not to risk additional latency and thus nausea.

Despite the low resolution, the passthrough worked quite well for Chan in games like Cubism. However, the feature is not suitable for reading or interacting with objects in the real world. As a video background for apps or the browser, Chan says Quest Pro’s passthrough feels much more natural than Quest 2’s monochrome passthrough.

Chan likes the new controllers, but is not completely enthusiastic. The built-in tracking eliminates occlusion problems, but also brings the disadvantage of only six to seven hours of battery life. Eventually, the heavier weight makes itself felt. Chan also had synchronization delays with the headset.

It’s not the headset wearer himself who benefits from the new eye and face tracking, but primarily his colleague Jeremy Williams, who doesn’t use a Quest Pro himself, Chan says. During an avatar meeting, Jeremy noticed his colleague’s much more natural facial expressions and body language. Chan, in turn, felt more relaxed as an avatar and not as observed as he would in an online meeting with webcams.

Many passthrough applications looked more like technical demos, and desktop connectivity still left something to be desired, Chan says. Horizon Workrooms was also not yet complete, although there were already many well-functioning features for meetings. In contrast to other reviews, multitasking with multiple applications and browser windows ran smoothly for Chan.

The actual practical charging station could not be used with the magnetic sidelight blockers necessary for immersive VR – they have to be removed for charging.

In summary, Chan says that the Quest Pro does not yet fulfill many of the promises made for the long ago introduced “Project Cambria”. The core of the review is therefore about the future potential, which is why Tested wants to spend more time on a follow-up review.