Meta Quest 3 could be quite slim – render design

My 3D modeler friend Marcus Kane made some nice renders again of the Stinson/Quest 3 CADs that I leaked late last yearhttps://t.co/CacMEOdgRY pic.twitter.com/xHjkeWvBCU

A 3D model of the presumed Meta Quest 3 prototype shows the possible design of the VR headset.

Later this year, the successor to Meta Quest 2 will be released. That much has been confirmed on Meta’s part. Last fall, well-informed hardware analyst Brad Lynch published blueprints of a VR headset prototype, allegedly showing the design of Meta Quest 3.

The Youtuber leaked drawings of Meta Quest Pro a few months earlier, which subsequently proved accurate. There’s a good chance that there’s something to the leak. Still, Lynch emphasizes that small details could still change.

3D artist Alvin Suen has created a 3D model based on the CAD blueprints of the presumed Quest 3 prototype. If you are reading this article on a smartphone, you can view the 3D rendering from all sides by touching it.

With the Sketchfab app, it’s also possible to see the headset in your physical environment via augmented reality. Meta Quest 2 also lets you view the VR headset in VR in the Meta Quest browser, or with the Figmin XR app.

What immediately catches the eye are the three elongated protrusions on the front of the VR headset. According to the blueprints, there are a pair of black-and-white and RBG cameras (left and right, respectively) as well as a depth sensor (center). These allow spatial tracking, color passthrough, and improved hand tracking. The elaborate sensor architecture suggests that Meta’s hardware focus is on mixed reality.

This image shows the technology located behind the front cover. | Image: SadlyitsBradley

Also quite noticeable is the slimmer profile of the case compared to Meta Quest 2 (review). Chances are good that Meta uses pancake lenses like they did with Meta Quest Pro (review), allowing for a slimmer form factor. 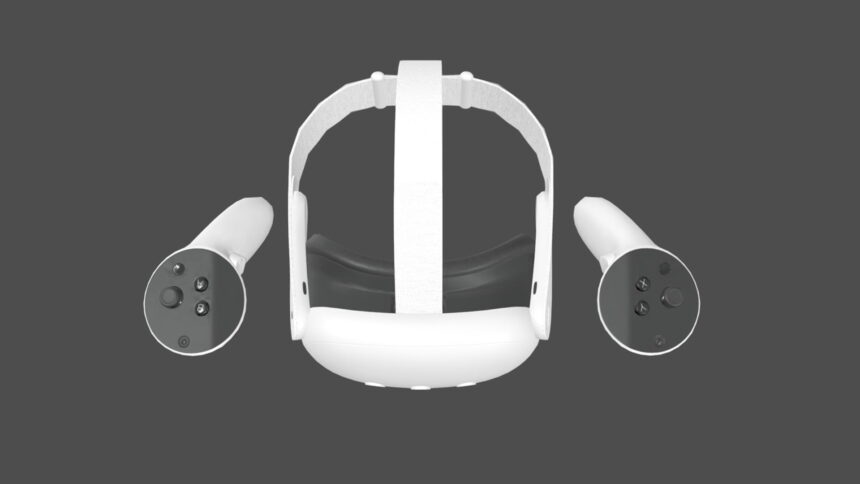 Meta Quest 3 should catch up to Pico 4 in terms of form factor. | Image: Alvin Suen

It is extremely unlikely that Meta Quest 3 ships with the Touch Pro controllers, given the high price of $300. Meta Quest 3 is supposed to cost between $300 and $500, according to Mark Zuckerberg. However, they would fit well with the new VR headset in white, as the 3D model shows. We assume that they will also be compatible with Meta Quest 3.

An overview of facts and rumors about Meta Quest 3 can be found behind the link.