Meta Quest 2: VR is on course for growth

Meta disappoints with its quarterly results and forecasts, but the VR ecosystem is developing positively.

On Wednesday night, Meta presented its fourth-quarter 2021 financial statements, and the numbers show that the company’s growth is slowing: Meta recorded fewer daily users year-over-year for the first time in its history, and profit was also lower than a year ago. The share lost almost a quarter of its value, which corresponds to a loss of 200 billion US dollars.

In 2021, Meta made a profit of about 40 billion US dollars. The investments in the Metaverse are costing the company dearly: The VR and AR division Reality Labs made a turnover of just under 2.3 billion, but this is offset by losses of 10.2 billion US dollars.

Metas annual results at a glance. The company lists Reality Labs as its own category for the first time. | Statistics: Meta

Building the Metaverse is, and will continue to be, a big loss-making business for Meta for many years to come. Zuckerberg expects Reality Labs spending to increase in the future.

Meta has about 10,000 employees working on VR and AR, and is expected to add another 10,000 skilled workers from Europe over the next five years. Meta employed nearly 72,000 employees as of year-end 2021, up 23 percent year-over-year.

Meta also did better in the holiday season than it did in 2020: in the fourth quarter of 2021, Reality Labs’ revenue was $877 million, up 22 percent from a year earlier. That’s due to “strong sales of Quest 2 during the holiday season,” according to Chief Financial Officer Dave Wehner.

These numbers suggest that the VR headset sold at least as well, if not better, last holiday season than it did after the October 2020 launch. There were already signs of this during the holiday season based on user and developer reports on social media.

More crucial to the vitality of the Quest ecosystem is how much money users have spent on Quest content. That figure reached a new milestone of $1 billion. In September 2020, one month before the launch of Quest 2, this value was 150 million US dollars.

$1B is great, but details are more important. Dev success on Quest is very broad:

More than 120 titles have generated revenue in the millions-that’s 2x more than the figure we shared last year.

The following statistic shows Meta’s latest overview of studio revenues. The numbers are from February 2021 and September 2020. 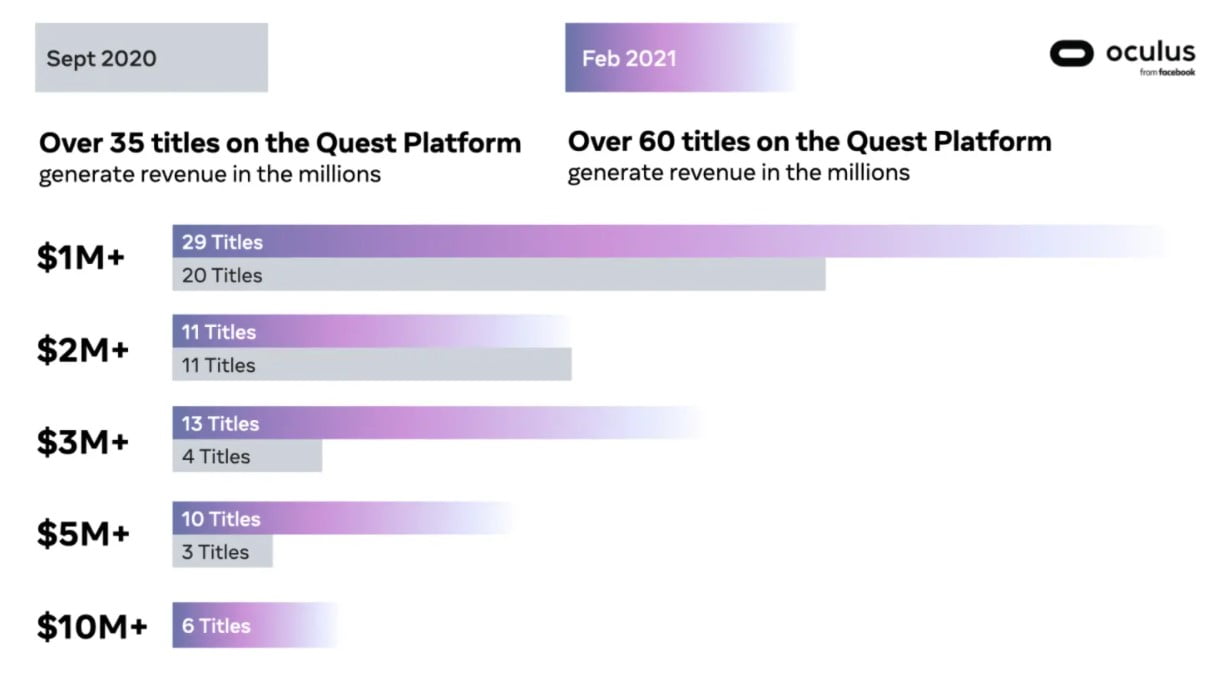 The comparison with the figures from the previous year shows: More and more studios are making good money from VR, which can be invested in new, better content. This in turn attracts new users to the ecosystem. | Statistics: Meta

In the investor conference, Mark Zuckerberg announced that Meta’s Metaverse app Horizon Worlds will be released for mobile devices this year. So far, the proto-Metaverse is only accessible in VR with Meta Quest 2, but this is about to change in the future. Horizon Worlds recently opened its doors in the U.S. and Canada and still has plenty of room to improve, according to initial testers.

“So while the deepest and most immersive experiences are going to be in virtual reality, you’re also going to be able to access the worlds from your Facebook or Instagram apps as well, and probably more over time. This will enable us to build even richer social experiences where you can connect with friends in the metaverse whether they’re in VR or not,” Mark Zuckerberg said.