The “Wave-1” ultrasound plate from Emerge aims to bring the missing haptics to virtual reality. The device is compatible with Meta Quest 2.

The ultrasound plate has an area of about 13 inches and can simulate 3D haptics within this area via ultrasound. According to the manufacturer, the volume of the haptic surface upwards is up to 90 cm with a beam angle of 120 degrees. The panel weighs around 5.7 lbs, wireless connectivity is possible via WiFi a/b/g/n/ac and BT5.

Ultrasonic haptics for VR and more

Combined with a Meta Quest 2, the Wave-1 is supposed to make the outlines of virtual objects tangible via ultrasound. So you can feel in reality what you see in the VR headset – as long as you keep your hands above the plate and a Wave-1-compatible app is running.

The manufacturer offers a smartphone app that comes with several mini-games and a social application. Maintaining the intended use, Emerge does not use VR controllers and relies exclusively on hand tracking as an interface.

The goal is not to replicate real textures or solid materials, according to the business. Instead, the Wave-1 is an experiment to find out how “a new language of touch” could look and function in virtual reality. Up to seven people at a time can meet in a social VR environment to do this, including shaking hands or testing simple haptics-based games.

Kickstarter campaign underway – but the device is quite expensive

The prototype of the haptics board has been in development since 2016, according to Emerge. The idea is not new; interface company Ultraleap, formerly Ultrahaptics, has been developing small ultrasonic rugs for XR and other interface applications since around 2014. However, Ultraleap ultrasound is not available as a simple haptics app for Meta Quest 2.

The possible reason for this becomes apparent when looking at the Kickstarter prices of the Wave-1: In the most affordable case, you get in at around 408 euros, the regular version is around 500 euros. For that money, you get the hardware and two apps for Quest 2. 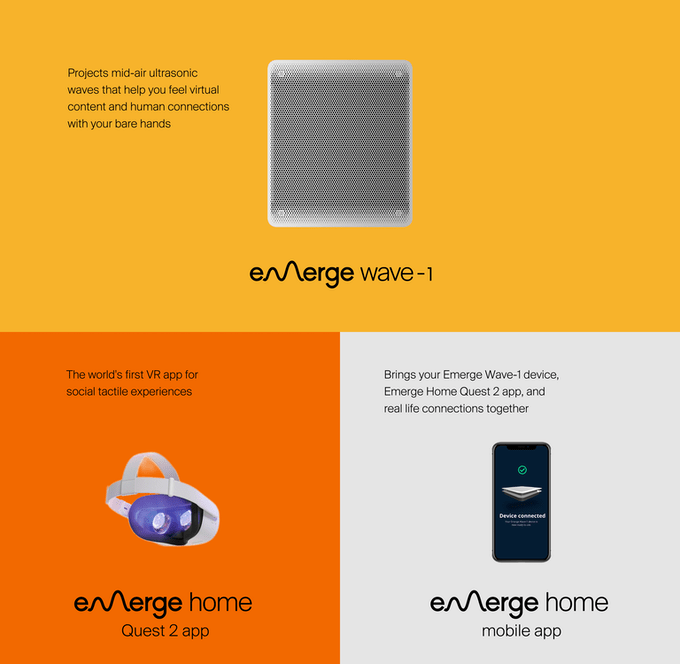 The Wave-1 is an experimental haptic gadget for Meta Quest 2. | Image: Emerge

Since there are currently no VR apps running with the ultrasonic plate outside the Wave-1 demos, and that is unlikely to change in the future, there is a dependence on continued software support from Emerge. The Wave-1 is therefore more of an expensive gadget for experimental VR enthusiasts with deep pockets – and not a permanent Quest 2 accessory.

If Emerge successfully completes its Kickstarter campaign, the Wave-1 is scheduled to ship until September 2022 at the earliest.

Read more about Haptics for VR and AR: