VR users could touch themselves for virtual haptics

Will haptics in VR soon be possible without controllers and VR gloves? Researchers are working on haptic hand tracking that considers your limbs to be accessories.


A research duo from Pittsburgh, Pennsylvania wants to make virtual reality tangible without haptic controllers. In the future, those who mix cookie dough with a virtual whisk in VR will simply grab their thumb and vigorously stir their own hand.

Do away with controllers – be your own haptic feedback

No rudimentary controller feedback, no reaching into nothing: Cathy Fang and Chris Harrison of Carnegie Mellon University want to bring haptics to virtual reality without VR controllers, data gloves, or other vibrating devices.

According to the researchers, hand tracking like that of the Meta Quest 2 has a key drawback: if you reach for virtual objects, there’s no resistance. If you tap a switch, for example, your finger swings through the air in reality. That’s all you feel – basically nothing.

With their self-developed technology called “Self-Haptics”, the two want to increase the immersion of hand tracking. You get tactile feedback exclusively from your hands, as the VR experience entices your hands to touch each other at the right moments.

Real touch instead of simulation in VR

For example, if you need to enter a sequence of numbers on a number pad in a VR game, one hand acts as the pad. With the index finger of the active hand, you tap the back of your hand in reality, and voilà: haptic feedback. 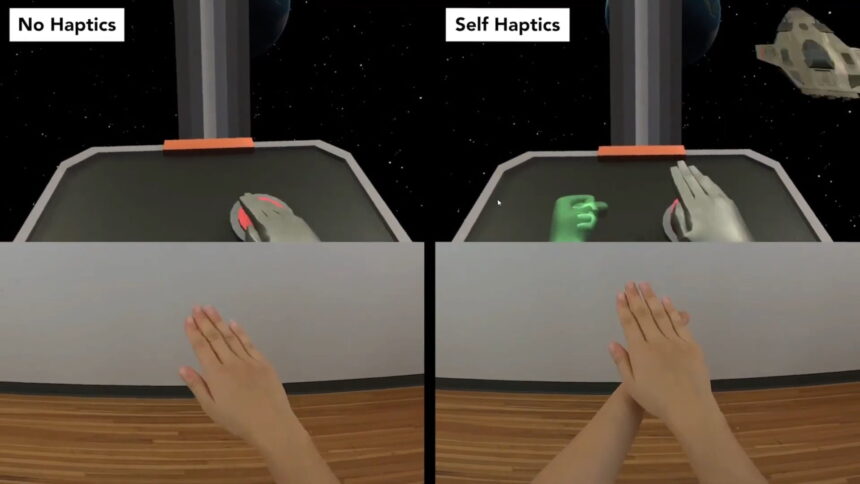 In order for the VR application to recognize the start of the interaction, you first touch an interaction point (green hand) with your passive hand. | Image: Cathy Mengying Fang, Chris Harrison

Other examples include stirring an eggbeater, where you grab your thumb and use both hands to mimic the stirring motion. For virtual Archery, you pull on the thumb of your passive hand. Or you press the magazine of a firearm with the palm of your hand against your gripping hand.

In the VR environment, interaction points are supposed to ensure that the passive hand is displayed in the right place and position during the action. 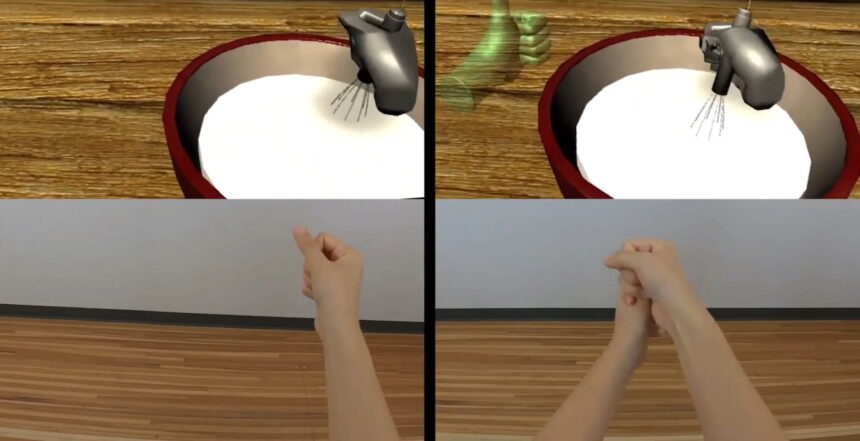 VR self-haptics: According to test persons immersion and fun increase

Fang and Harrison tested how the self-haptic experience is received by gamers in a study involving eleven male and female test subjects. They conducted VR experiences with hand tracking without haptic feedback and with self-haptics one after the other.

One- and two-handed interactions were used, in which one or two hands felt feedback. Subjects indicated that self-haptics can increase the tactility, immersion, and enjoyment of a VR experience. Preference was mainly given to interactions where both hands had a task and felt feedback.

According to the researchers, the self-haptics system is currently only useful for certain applications. Arms and hands have a limited surface area by nature. Therefore, only virtual objects that resemble the body parts in size and shape should be used.

In addition, the technique occasionally requires partial occlusion of a hand, which can lead to tracking problems, he said. In the future, the team hopes to capture other body parts and features. For example, if the fingers were captured, a single hand could serve as a feedback giver.