Meta Quest leads the VR market by a gigantic margin

Meta Quest 2 is the most widely-used VR headset. But how big is the lead over other devices? A statistic gives us an idea.


Over the weekend, the co-founder of Metaverse advertising provider Zesty shared an interesting screenshot. The image shows how many hits from VR headsets the company’s WebXR content registered in the past 24 hours.

The statistic has limited significance. It only shows standalone VR headsets with WebXR-enabled browsers (not including PC VR devices). It also does not indicate the number of different headsets. However, approximately comparing the distribution ratio is enlightening. 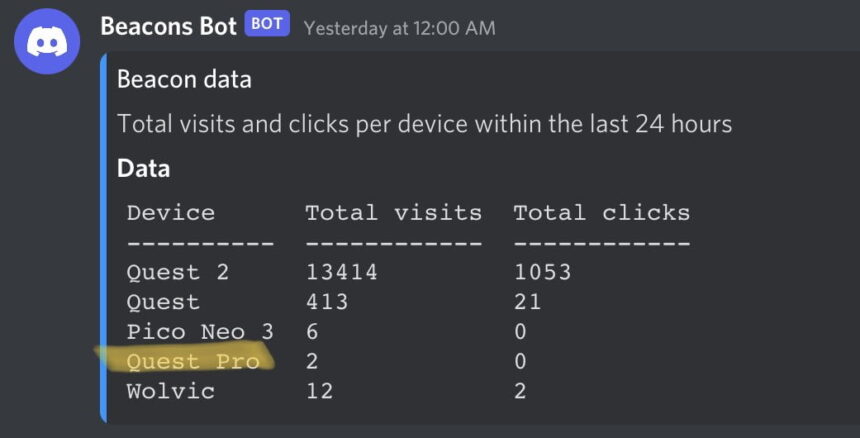 We already knew that Meta Quest 2 sold much better than the first Meta Quest and is much more widespread for this reason. But the difference in size that the statistics suggest is surprising. The system records 32 times as many hits by Quest 2 compared to Quest 1. The numbers for Meta Quest 2 must include users who switched from the older VR headset.

Meta Quest was released in May 2019, followed a year and a half later by Meta Quest 2 (review), which cost less despite a newer chip and became an entertainment product that sold millions of copies.

Meanwhile – with Meta’s blessing – more and more VR games are released only for Meta Quest 2. Even Meta’s proto-Metaverse, Horizon, is only available for Meta Quest 2, so the original Quest’s outdated hardware is no longer a hindrance.

The same goes for Meta’s flagship game Population: One, which is only playable with Meta Quest until the end of October. That a virtual reality app drops Quest 1 support after launch could happen more often in the future. Meta wants to give third-party studios just that option, potentially hastening the end of the first Meta Quest.

Also listed in Zesty’s stats are Pico Neo 3 (review), unspecified devices that use the Wolvic browser, and for the first time, a headset called “Quest Pro,” which prompted the entrepreneur to share the screenshot.

The Quest Pro is probably the product name of Project Cambria (info), i.e., Meta’s premium headset that will be released in October. Zesty’s system read the name directly from the browser data.

There have already been hints that Meta will name its new, high-priced VR headset “Quest Pro”. If the speculations turn out to be true, the next iteration of the device, which is rumored to be released in 2024, will probably be called “Meta Quest Pro 2”.