Meta continues to work on its PC VR streaming. With the next update comes a long-awaited feature.


A new line has appeared in the Oculus Debug Tool that promises mobile ASW (see image below).

Asynchronous Spacewarp is a rendering technique developed for Oculus Rift that helps VR apps when performance drops. If the frame rate drops below a critical mark, the VR app automatically renders only half of the frames and every second frame is generated artificially.

This results in a smoother gaming experience. ASW primarily helps with performance-hungry VR games or computers with weaker hardware. ASW also takes effect when playing with a Meta Quest 2 on the PC. It does not matter if you use the wired Oculus Link or the wireless Air Link.

Virtual Desktop has been able to do this for a while

Update 38 should now bring mobile ASW. The new feature allows the artificially generated images to be calculated on the VR glasses instead of the PC, which should reduce the load on the graphics card and improve performance. 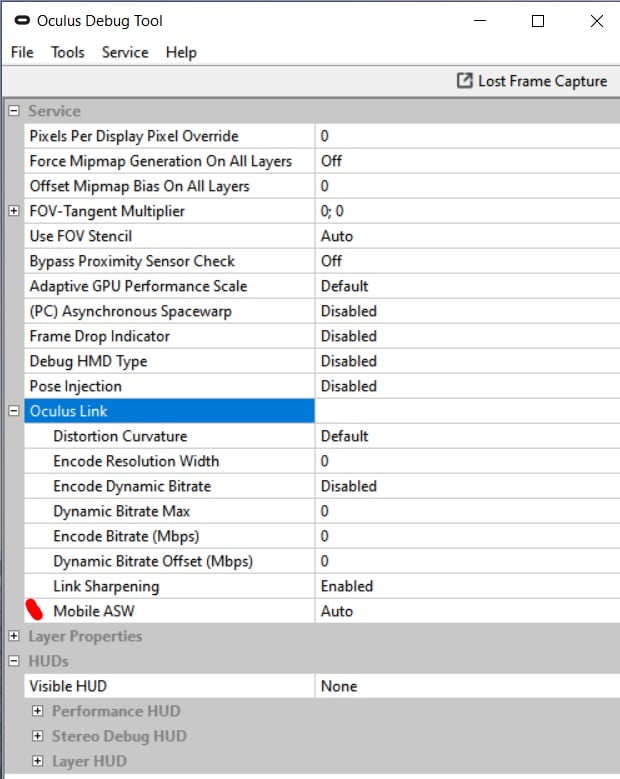 The Oculus Debug Tool allows settings to be made to Meta’s PC VR app that are not listed in the program itself. A new feature called Mobile ASW shows up in the beta version of Update 38. | Image: Reddit user u/dublinmoney

Since the XR2 is reserved for Meta Quest 2, SSW is only supported by this device, leaving Meta Quest 1 out. The same should be true for Meta’s mobile ASW. It’s been almost two months since the last Quest update appeared. A release should not be long in coming.

According to Valve’s monthly Steam statistics, almost every second VR headset used on the PC is a Meta Quest 2, which explains why Meta is still investing in its PC VR streaming.

The last major improvement rolled out in September with Update 33. At that time, Meta brought a feature called Link Sharpening: a sharpening filter that was further improved with Update 37. Virtual desktop developer Godin countered with his own solution. With mobile ASW, Meta closes the feature gap to Virtual Desktop and offers its own Quest-native ASW.

Native Quest games without a PC connection will also soon benefit from the rendering technology behind Asynchronous Spacewarp. A new rendering technique unveiled in the fall goes by the name Application Spacewarp (AppSW) and could bring up to a 70 percent performance gain in VR apps, according to Meta.