Meta is bringing two new fitness features to the Meta Quest 2 and Meta Quest Pro. Users will soon be able to automatically sync their workout data with Android smartphones. In addition, the mobile VR headset can be paired with a heart rate monitor or smartwatch via Bluetooth.

However, two features important for fitness tracking were missing until now: heart rate measurement and automatic synchronization with data collected outside of VR.

Since last summer, Meta Quest users have at least been able to access captured workout data from Meta Quest Move via the Quest app on their smartphone. Part of the update also included automatic syncing of Apple Health and Meta Quest Move. Meta is now adding this feature for Android smartphones as well.

After the update, you can pair Meta Quest Move with Google Health Connect. The data from the VR headset will then automatically flow into your smartphone’s fitness tracker app (e.g. Google Fit) with the daily data collected from your smartwatch.

How to connect Meta Quest Move with Health Connect on Android

Launch Google Health Connect on your Android smartphone and grant access permission to the Meta Quest app. To learn how to sync Meta Quest Move in the VR headset with Android or iOS, read this article.

Then open the Meta Quest app on your smartphone and launch the Move integration. You can find it under the “Discover” or “Menu” tabs, which you can select at the bottom of the screen. Then open the “Connected Apps” tab and activate the connection to Health Connect. 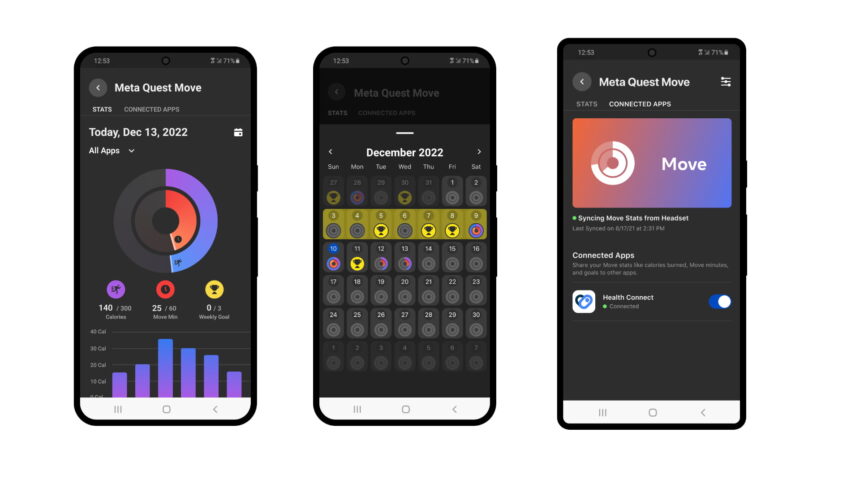 Meta Quest will soon be compatible with heart rate monitors

Also new is the Quest VR headset’s compatibility with Bluetooth heart rate monitors. “When a compatible heart rate monitor is paired with Meta Quest Move, the heart rate overlay will be displayed across any game or app in VR. A developer will not need to integrate,” a Meta spokesperson told The Verge.

Developers would not need to perform any additional integrations. Compatible devices include the Garmin HRM-Dual and Polar H10 chest straps, as well as many smartwatches. We don’t yet know when exactly the new fitness features for Meta Quest Move and a list of compatible devices will be released.