Only about a month after the introduction of the new Metaverse security rules, Meta is easing them again – if the users want it.

At the beginning of February, Meta introduced a virtual mandatory distance of around 4 feeet between avatars in the Metaverse experiments Horizon Worlds and Venues. The distance roughly corresponds to the social zone, i.e. the distance that one keeps from strangers in reality.

Meta made the change fairly quickly after reports of harassment attempts in Horizon Worlds. The caution and fairly strong defensive reaction are understandable: Meta is under special scrutiny and cannot afford damaging reports about the just emerging Metaverse concept. The image of the social company is tarnished anyway, Horizon Worlds should be able to develop without the legacy of Facebook and Instagram.

But as was clear when the forced avatar distance was announced, Meta’s enforced distance also robs virtual reality of a key superpower: the sense of physical presence and closeness in digital space.

Accordingly, it is not surprising that Meta is relaxing the mandatory distance again, barely a month after its introduction: Users should now choose whether they want to have the safety distance activated and for which groups. 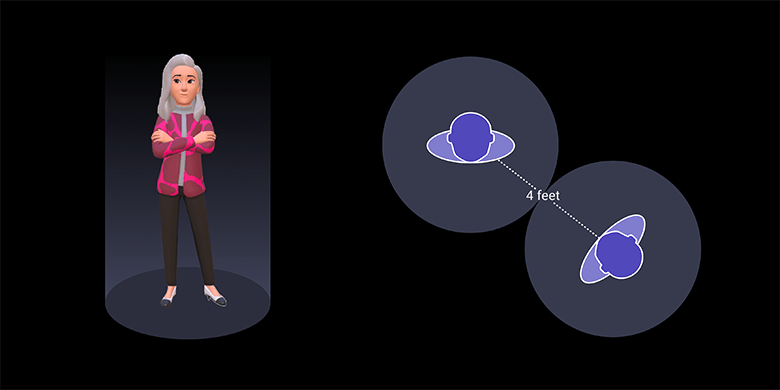 Avatars in Meta’s Horizon world will optionally keep up to 4 feet of forced distance from each other in the future. The distance can be set differently for friends and strangers. | Image: Meta

Previously the distance was set by default, this now only applies to non-friends. So friends avatars are allowed to get closer and closer again by default.

If you don’t care about the safe distance, neither with friends nor strangers, you can deactivate it completely. If two users have set different distances, the larger distance trumps the other. Protection from intrusion into the intimate zone, for example against an avatar’s hand in the face, is always active.

According to Meta, developing for VR is “perhaps one of the most difficult challenges we’ve faced in an entire generation of computing,” because virtual reality is not bound to fixed viewing angles and 2D screens. According to Meta, the changes that have now been made are based on requests from the community. The company holds out the prospect of further changes along new findings about social contact in VR.