“Light Delights” for Quest Pro and Quest 2 will delight you

Interaction designer and Unity Labs employee Greg Madison continues to explore his favorite topic of mixed reality in his spare time. Now you can enjoy the result of a highly creative weekend on your Quest 2 and Quest Pro.

Madison’s free passthrough demo called “Light Delights” features fascinating objects floating in space that can be manipulated via hand tracking. Glowing spheres and geometric shapes float directly in front of the passthrough image. Thanks to the integrated hand tracking, you can touch and influence all objects with your hands.

The standalone color passthrough is IMO the most promising direction for MR. I tested for fun some ideas over the weekend, the magic is there and it’s mesmerizing to play with.
Anyone with a Quest PRO who would like to try this? @MetaQuestVR #madewithunity pic.twitter.com/89xw54vpKZ

A former magician, Madison has a knack for capturing the attention of his audience with unusual objects. Despite its simplicity, the design looks stylish. Or intentionally kitschy, as with a bust shimmering in pink neon lights.

What’s most fun is how directly and responsively the objects slide through my hands. When I nudge shiny spheres and cuboids away from the magnetic center, the objects float by as I would have expected. The lack of haptics barely bothers me as my fingers glide through the air.

In one scene, my hands become magnets themselves, dragging a tail of geometric blocks through the spaces. It really feels magical. 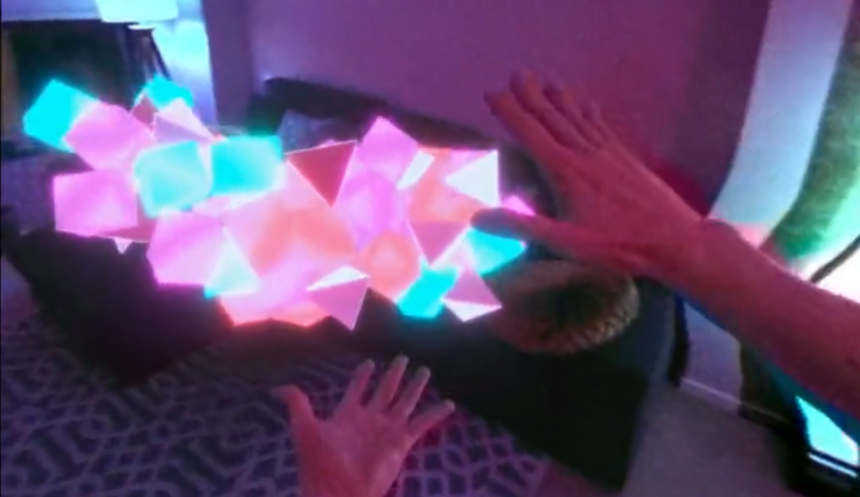 Equally impressive are the dynamic light sources in multiple colors that I move around. You can also visit the developer’s office: I won’t tell you how, though – find out for yourself.

Even with the Quest 2 and the crude black-and-white passthrough video, I enjoyed the demo. Users of the Quest Pro will have an even more immersive experience with the color passthrough.

Madison’s interactive visualizations would lend themselves well to psychedelic puzzle or action games, or to music visualizations in the style of Tempest 2000 creator Jeff Minter.

You can now download version 0.0.1 of Light Delights for free on Github.

Madison previously showed visually stunning mixed reality experiments. In March 2022, he showed how we might work in the Metaverse office in the future – with AR headset, hand tracking and digital monitors.

Back in early 2020, the former magician designed a mixed reality counterpart of his real home, which he later turned into an AR game. At Unity Labs, Madison is also working on social experiences like the mixed reality chess game Slices, which is being created together with Meta. You can find more experiments on Madison’s YouTube channel.